When Benjamin Franklin decided to draw his famous “Join or Die” artwork and submit it to the Pennsylvania Gazette in 1754, he started what is now known as the modern day political cartoon. Since then, political comics has not only provided a way for artists and writers to express themselves, but they also have been able to do so freely under the First Amendment.

From the President’s tweets to natural disasters to the resurrected argument refuting science and claiming that the world is actually flat, there is literally no shortage of material for the satirical medium. And they are no longer regulated to just the back of the newspaper. Now political comics are available in webcomic format, as ebooks and yes, even in print. Many artists are using their talents to criticize, protest and report. Often with a bird’s-eye view of society. 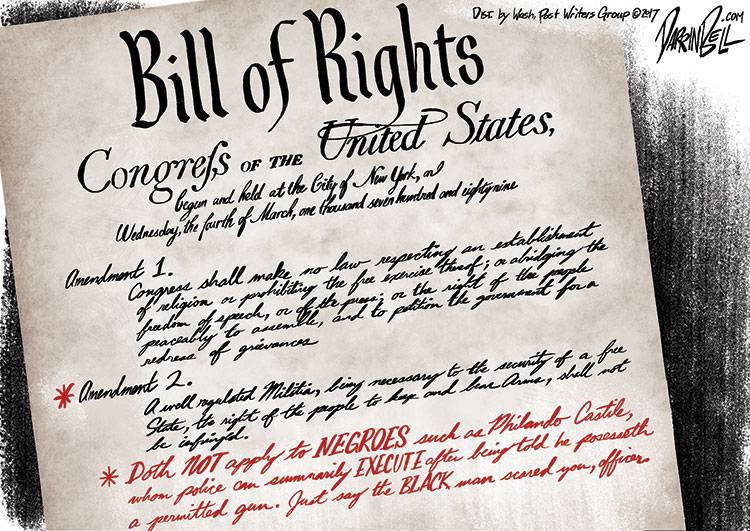 As syndicated cartoonist for the Washington Post, Darrin Bell uses a single-panel approach to his work and often captions his work with his take on political matters (just in case you missed his meaning). His work is thoughtful and sometimes a punch in the gut as he often incorporates text directly onto his artwork as opposed to relying sole on speech bubbles. His annual books collect his year’s cartoons into volumes but last year Bell dedicated an entire book to just the 2016 elections. 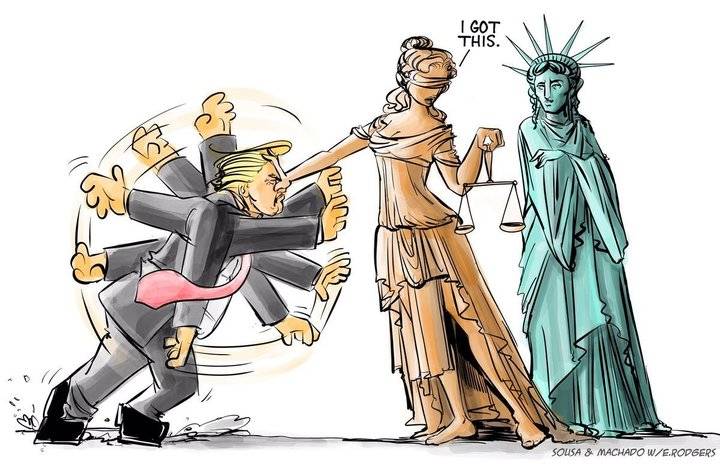 The husband and wife team of Cynthia Sousa and Sam Machado have been creating comics for years and actually have a regular sci-fi Webtoon comic called Cyberpunk. However, the Machados are most famous for this cartoon they created in reaction the Trump’s Muslim Ban. The cartoon called “I got this” features a weary Lady Liberty begin comforted by Justice herself, who is holding back a flailing Trump by his face. The piece went viral and gave people something to smile about during a very stressful ad frightening moment in history. More of their brilliant political comics can be seen on their website.

I actually stumbled upon Keith’s Knight’s site The K Chronicles when I was looking to start a website with the same name. I’ve been a fan ever since. Raised on hip-hop and Calvin and Hobbes, Knight has had 3 popular comic strips, the nationally syndicated Knight Life, (th)ink and K Chronicles. Knight ranges from  1 to 9 (sometimes more) panels, but it’s his single panel work that is my favorite. His comic timing almost always has me cackling out loud, and almost always makes me (th)ink. He also collects his work annually. And one of his most popular books is a collection of police brutality cartoons called They shoot Black People Don’t They? 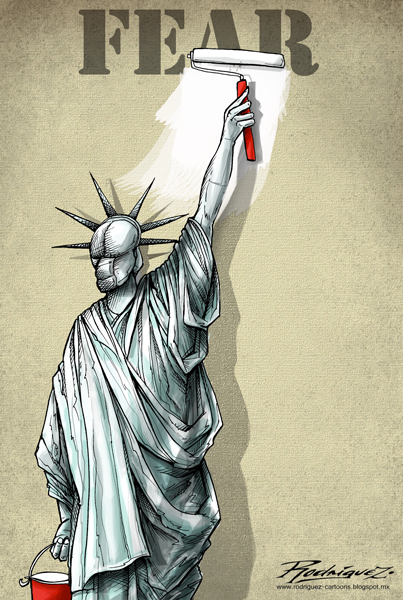 Antonio Rodriguez is a Mexican cartoonist and is a member of both Mexican Society of Cartoonist and The International Association of Cartoonists MIKS. He is currently the illustrator for the Mexican newspaper La Voz de Michoacán, but is also published regularly in Italy and Spain. Rodriguez’ single panel style showcases a drier sense of humor in his work. I have also learned more about international news simply by seeing his artwork. More of his work can be found on his website. 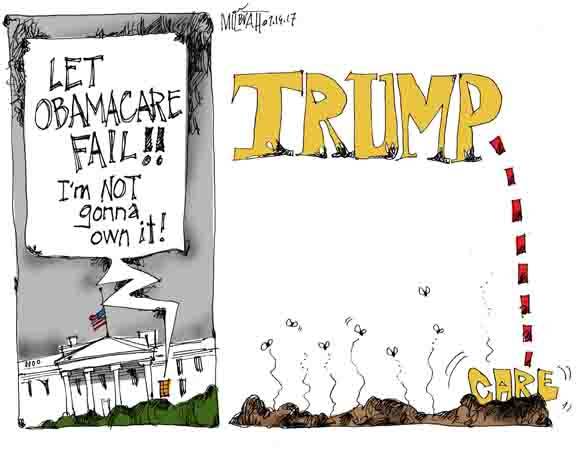 A member of the American Association of American Editorial Cartoonists, Deb Nilbrath has drawn for practically everyone. The New York Times, the Daily News, The Washington Post, CNN Headline News and more. Her bold colors and thin linework remind me of a brighter version of Berkeley Breathed’s Bloom County sometimes. Every few days he posts 1-4 panel gems on her site As Deb Sees It about WTH happened in the White house. 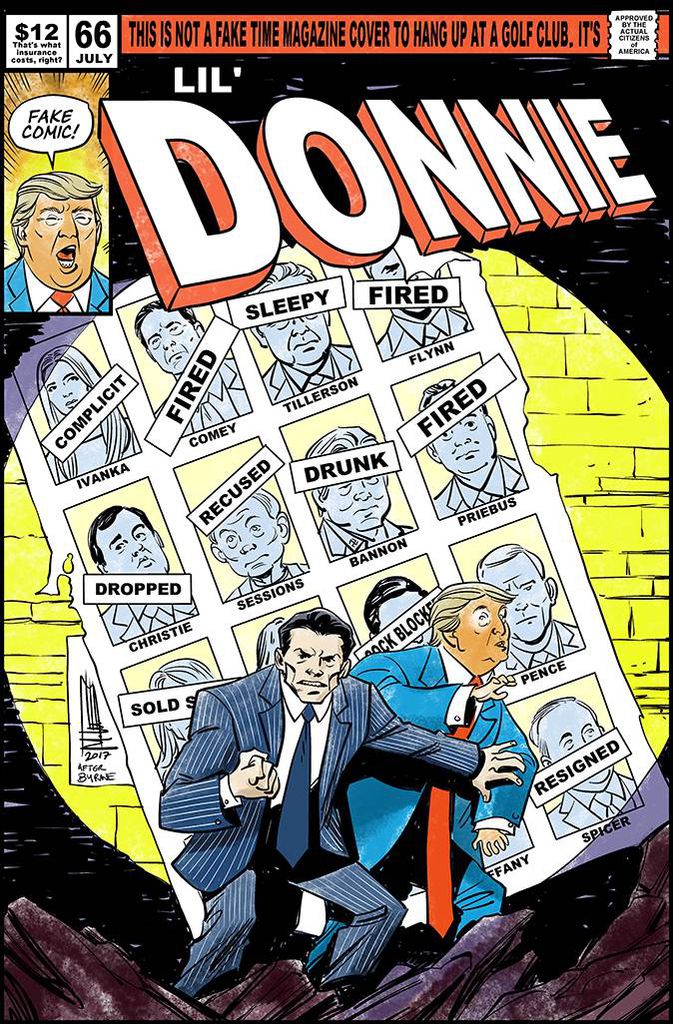 Mike Norton is best known as the Founder of Four Star Studios and the Eisner Awards-winning Battle Pug. (Which is a must read because. battle. pug). But his webcomic Lil Donnie, the youngest on this list, dedicates four panels a week to our current president. Norton comments on everything from his (supposed) relationship to Putin, foreign affairs with North Korea, and constant news and Twitter flubs, without straying too far from the actual truth. Norton’s day-in-the-life style and simple color palette make this series a fun one. 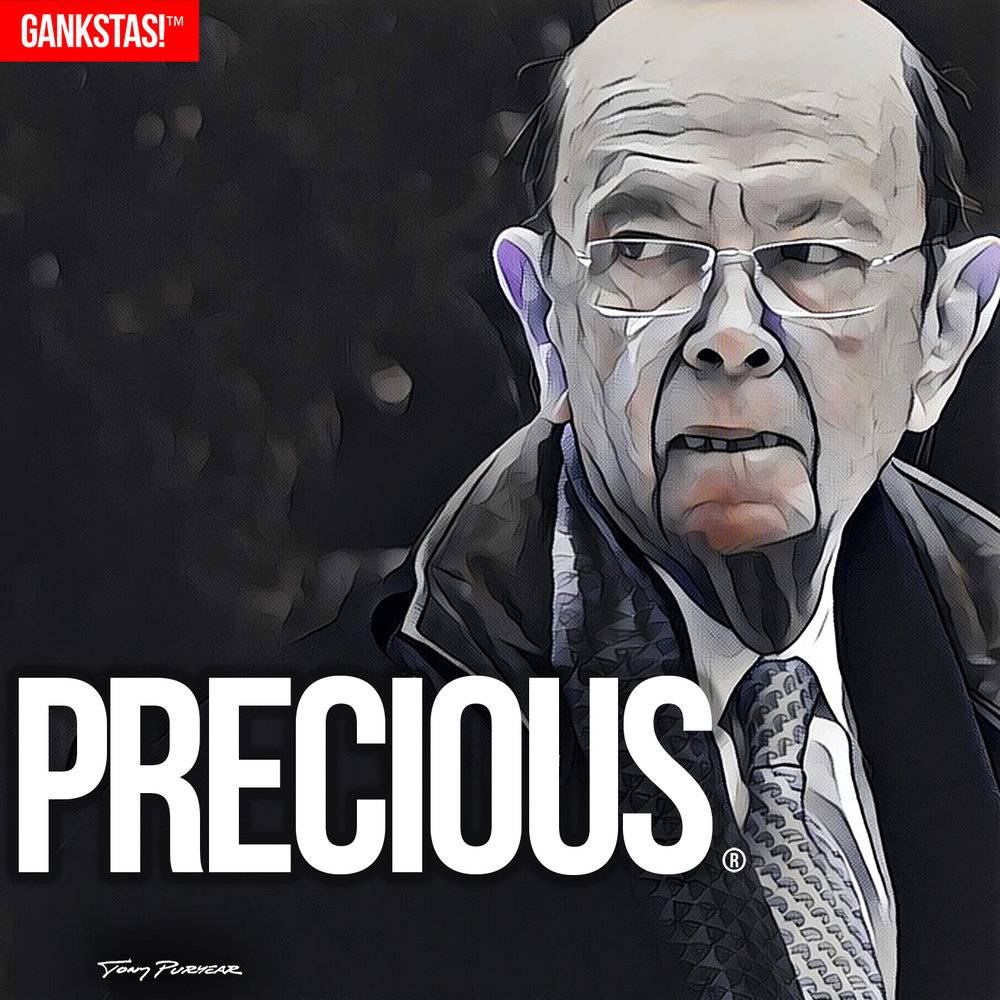 Puryear is a writer and artists that crosses genres. He wrote the script to the 1996 hit movie Erasure, Starring Arnold Schwarzenegger and Vanessa Williams, co-created the Dark Horse comic Concrete Park,  drew the iconic poster for Hillary Clinton’s 2008 Presidential campaign, and now GANGSTAS! Know Your Thug, a scathing look at the current US government and its players. His single panel artwork and the stark use of black and white art with red accents often compares the current US regime to members of movies and TV shows, such as The Sopranos and Lord of the Rings. More of Tony’s work can also be found here.