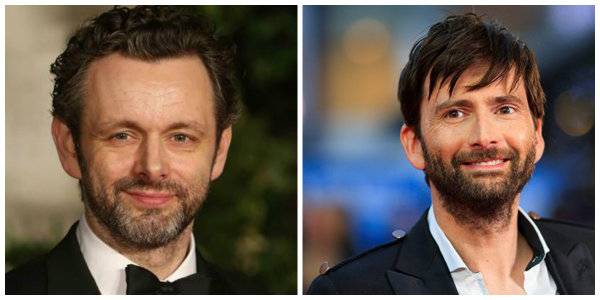 If you were at one the Neil Gaiman events in Austin, Dallas, or Houston in early July, you were treated to the normal Gaiman fare: answers to questions submitted by the audience before the show, readings from any one of his short story collections, anecdotes about his (surprisingly extensive) time in Texas, and crowd favorites like “The Day the Saucers Came.” But they got something extra, too.

What they got was a taste of what is to come when Michael Sheen and David Tennant star in the upcoming Good Omens. Sheen will play the angel Aziraphale, and Tennant will play the demon Crowley. The two have grown quite fond of their comfortable existence in are not looking forward to the end of it all in the final judgement. Hilarity, of course, ensues.

Gaiman explained why he had not written an episode of Doctor Who for Peter Capaldi’s Doctor or for the adaptation of American Gods  on Starz. He devoted himself to honoring the last request of his dear friend and occasional writing partner, Sir Terry Pratchett. Pratchett asked his friend and collaborator on the Good Omens novel to write the script for the TV adaptation. It was not a request that Gaiman could turn down. That’s where his focus has been, and the Texas audiences were treated to readings of scenes that had been cut from episode 3.

While they will not make it to air, the readings were still significant in that they gave the audience a taste of what they can expect when the show does premier on Amazon in 2018. One of those things is of particular interest – much of it takes place in a bookstore. What better place to try and ward off the apocalypse?