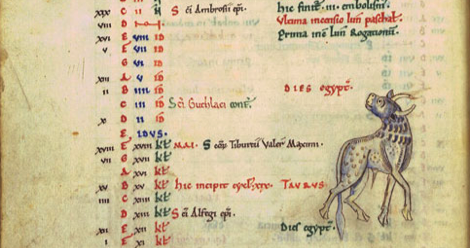 During the Middle Ages, the psalms of the Bible were among the most widely known texts. They were used when teaching children how to read, and they were recited during services each week. It is believed that most people knew the psalms by heart, either in their entirety or as part of prayers.

The psalms were collected in psalters. A psalter is a manuscript where all the psalms are included, as well as other texts that the commissioner of the psalter considered to be important. Psalters are among the most amazing examples of medieval book art that has survived to our day.

Here are ten things you need to know about the St. Albans Psalter.

1) The St. Albans Psalter consists of 209 folios, or 418 pages, made from vellum. The pages measure at 27.6 cm by 18.4 cm, or 10.86 inches by 7.24 inches. This is not the original size of the pages. Sometime during the existence of the St. Albans Psalter, the pages have been trimmed. The leather binding is medieval and was restored in the 1930s. 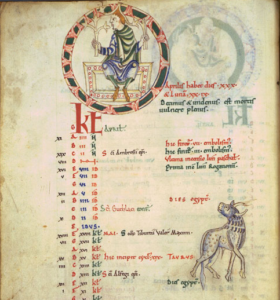 2) The St. Albans Psalter consists of five distinct parts, the most notable of these are, of course, the psalms themselves, but also forty full-page miniatures depicting scenes from the Bible; the Chanson of Alexis, which is the oldest surviving text written in Old French; a discourse on good vs. evil, and a perpetual calendar with days of bad luck, so-called Egyptian Days (Dies Aegyptiaci), clearly marked.

3) The St. Albans Psalter was created at St. Albans monastery. It is believed to have been commissioned by Geoffrey de Gorham, who was abbot of St. Albans between 1119 and 1146.

4) Six scribes and four artists have been identified in the creation of the psalter. Several of the scribes have also worked on other books created at St. Albans during the twelfth century.

5) The most outstanding images are created by the so-called Alexis Master, who has illustrated the Chanson of Alexis. The Alexis Master was a highly skilled artist, up to date with the latest artistic trends, and showing artistic influences from the Holy Roman Empire on the European continent as well as the from the Byzantine Empire in the eastern Mediterranean.

6) The St. Albans Psalter is believed to have been a gift from Geoffrey to his close friend, Catherine of Markyate (c. 1096–after 1155), an anchoress living at Markyate, not far from St. Albans monastery. 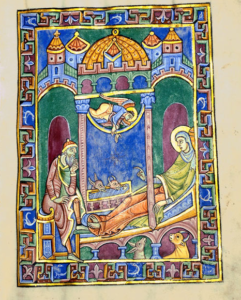 7) Because the book was a gift to Catherine, the illuminations and miniatures of the St. Albans Psalter have a female emphasis. E.g., in the Garden of Eden, Eve is seen handing Adam an apple, and in the Nativity scene, Mary is seen speaking to a listening Joseph. In the scene of the Presentation of Christ at the Temple, Joseph has been erased all together and instead have been replaced by a group of women.

8) Each psalm begins with an illuminated initial that depicts the theme of the psalm in question. This theme is summarized in red ink at the beginning of each psalm.

9) The most famous initial is the so-called Christina Initial, which begins Psalm 105. The initial is the letter C and depicts a woman leading a group of monks to Christ. The woman is believed to be a portrait of Christina. 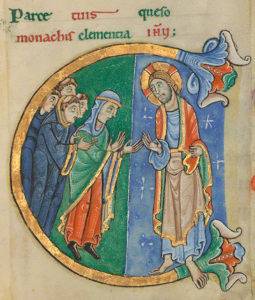 If you want to learn more about the St. Albans Psalter and scroll through the pages of this beautiful manuscript, click here.

If you want to read about another amazing psalter, click here for ten things you need to know about the Luttrell Psalter.