Sponsored by Candlewick Press, publisher of Poe: Stories and Poems by Gareth Hinds. 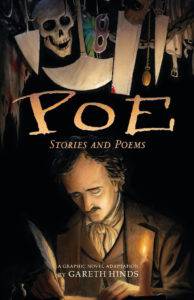 The word poetry tends to evoke blurry pictures of yellowing pages and musty basements. It has become the literary equivalent of Miss Havisham’s crumbling wedding cake: stale and indigestible. That is, however, far from an accurate perception of what was once the most prevalent of the literary arts. A poem is simply another form of storytelling, and it can be every bit as enthralling as a good novel. However, it’s its language and lyrical quality that puts it one step beyond: poetry involves nearly all your senses.

In her excellent article, “10 Poets for People Who Don’t Like Poetry,” Nikki Vanry listed ten astounding poets for people who didn’t think they liked poetry. For those unconvinced, or even those who would simply like more recs, this is installment number two:

Don’t make a face. Just because Rimbaud lived in the 19th century it doesn’t make his poetry boring or incomprehensible now. His book A Season in Hell is one of my go-tos. The sheer passion in these poems makes my heart vibrate every single time. This is a stanza from “Hellish Night“:

And this is still life!— What if damnation’s everlasting! A man who wants to mutilate himself is pretty well damned, right? I think I’m in hell, therefore I am. It’s the catechism come true. I’m the slave of my baptism. Parents, you’ve created my tortures and yours.—Poor nitwit! Hell can’t wield power over pagans.— This is still life! Later on, the delights of damnation will be much deeper. A crime, quick, so I can plunge into nothingness in accordance with human law.

Pizarnik’s work is one continual exploration of self. Born in Argentina to a family of Russian immigrants, she made waves with her somehow intensely passionate yet highly contained style. Death and cruelty were big topics in her poetry, like it shows in “Night Singer” below. She put an end to her life at the age of 36, after battling with mental illness her entire life, but her popularity shows no signs of abating.

She who died of her blue dress is singing. Her song is suffused with death and she sings to the sun of her drunkenness. Inside her song there is a blue dress, a white horse, a green heart tattooed with echoes of her own dead heart. Exposed to all that is lost, she sings with a stray girl who is also herself, her amulet. And in spite of the green mist on her lips and the grey cold in her eyes, her voice breaks down the distance gaping between thirst and the hand that reaches for water. She is singing.

Felix is a woman of many hats. Speaker, activist, MFA holder and, of course, poet. Her work is so raw, so intensely emotional that reading or watching her recite one of poems feels like intruding in a deeply personal moment. It’s unsettling – in the best possible way.

This poet scavenges from the treasure troves of Greek mythology and western folklore, and turns her bounty into something new and fresh. Her first poetry collection, Becoming the Villainess, feels a lot like escaping into a thatched cottage in the midst of an enchanted forest. You needn’t, however, be on the lookout for monsters: the women she writes about have their own claws.

I hardly think this needs an explanation. Atwood’s edgy, provocative style isn’t limited to her prose: she draws from a deep well of sources to question the world around her, in a deceptively simple language that is all the more exquisite for it. In “Helen of Troy Does Countertop Dancing” she gives the so-called reason for the Troyan War a real voice. This is the final stanza:

Not that anyone here
but you would understand.
The rest of them would like to watch me
and feel nothing. Reduce me to components
as in a clock factory or abattoir.
Crush out the mystery.
Wall me up alive
in my own body.
They’d like to see through me,
but nothing is more opaque
than absolute transparency.
Look–my feet don’t hit the marble!
Like breath or a balloon, I’m rising,
I hover six inches in the air
in my blazing swan-egg of light.
You think I’m not a goddess?
Try me.
This is a torch song.
Touch me and you’ll burn.

That’s right, folks, Angelou didn’t only write prose. Her poetry runs the gamut of human experience, particularly the Black experience. She consistently wrote about strength of spirit, about the beauty of the black woman, about the long-term consequences of slavery. The aching beauty of her work doesn’t lie solely in its themes, however: her adherence to rhyme patterns makes it a profoundly lyrical experience.

This Tumblr sensation rose to the top of my list in less time than it takes to get your heart broken. Her prose-like work deals with issues like feminism, mental illness, and love. She’s one of those poets whose work always gives me what I need, in one way or another.

Brown’s poetry is a blade, sharp and glistening. An Afromexican poet from Texas, she wields an impeccable style against racism and misogynoir, her work revolutionary both for its content and the incredible quality of her craft. And I do mean incredible. If it’s not taught in future classes, it will be a disservice to an astounding artist.

Neruda will probably go down in history for writing some of the most stunning love poetry in all of literature. You don’t even have to know poetry to be familiar with Neruda’s work – it has been quoted in movies, novels, and there is more than one blog out there with his words pasted on the title.

Ladies, Frost yourselves! (… sorry) A classic for a reason, Frost’s poetry is so damn beautiful it makes my breath catch every time, but it’s not in the least obscure or difficult to follow. Like Angelou, his beautiful rhyming means that you should really read it aloud, playing with the sounds, to get the most from the experience.

Some say the world will end in fire,
Some say in ice.
From what I’ve tasted of desire
I hold with those who favor fire.
But if it had to perish twice,
I think I know enough of hate
To say that for destruction ice
Is also great
And would suffice.

Storni’s was the first poetry I fell in love with, when I was all of eleven years old and I asked my mom to buy it for me after seeing it in a catalog. At the time, her topics of love and feminism went completely over my head, but I was drawn to her clear, beautiful blank verse. The poem she wrote just before her suicide, “I Am Going to Sleep”, remains one of the rawest, most beautifully painful works of literature I’ve read in my life.

“I Am Going to Sleep” by Alfonsina Storni

Born and raised in Barcelona, Gil de Biedma tackled issues like the Spanish Civil War and its ensuing 40-year long dictatorship, his homosexuality and his class privilege. In an attempt to gain distance and explore his identity issues, he created an alter-ego he only put to rest nearing the end of his life, in a stunning poem titled “Against Jaime Gil de Biedma.” Posthumous Poems followed – a public way of saying he was no longer dealing with any personas but his own. This is the beginning of that poem:

What good is it, I wonder, to move up floors,

To leave behind the basement, darker than

My reputation – which says it all –

And to take on a maid,

To renounce my bohemian ways,

If you’re to come then, you, bore,

You, embarrassing guest, a fool dressed in my garb,

A useless drone, a disgrace,

Did I miss your favorite? In the first installment of this mini-series you’ll find links to several more wonderful poets.