Sponsored by It All Comes Down To This by Karen English. 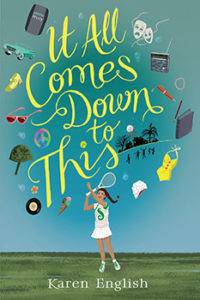 It’s 1965, Los Angeles. All twelve-year-old Sophie wants to do is write her book, star in the community play, and hang out with her friend Jennifer. But she’s the new black kid in a nearly all-white neighborhood; her beloved sister, Lily, is going away to college soon; and her parents’ marriage is rocky. When riots erupt in nearby Watts and a friend is unfairly arrested, Sophie learns that life—and her own place in it—is even more complicated than she’d once thought.

Leavened with gentle humor, this story is perfect for fans of Rita Williams-Garcia.

at The Guardian, The 2017 Man Booker Prize Longlist in Pictures

at Literary Hub, The Most Anthologized Poems of the Last 25 Years

at Ominvoracious, The Best Science Fiction and Fantasy of 2017 So Far

at The Millions, Ten Ways to Organize Your Bookshelf

at Brain Pickings, The Best Illustrations from 150 Years of Alice in Wonderland

at Bustle, 10 Ways To Read More Books This Year

at Mental Floss, Ernest Hemingway’s Guide to Life, In 20 Quotes

at BuzzFeed, 22 Novels That Should be Turned into Films

at LitReactor, 7 Memoirs by Young Authors