Maggie Nelson is the award-winning writer of The Argonauts and is known for her genre-busting books which are a hybrid of autobiography, poetry, and criticism. Two of her slim volumes of work, The Red Parts and Bluets were published in UK for the first time earlier this month. Here’s what they are about. 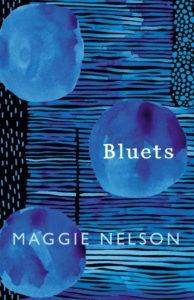 Bluets  – Bluets is comprised of vignettes covering myriad topics from anthropology to depression, connected by Nelson’s fascination with the color blue. At the time that she wrote this autobiography, Nelson was simultaneously dealing with the crushing loss of a relationship and bearing witness to the physical suffering of a friend who had become a quadriplegic after an accident.

This slim volume combines her deeply personal reflections on the color with the historical and artistic significance of blue, flitting lucidly between the two ends of the spectrum.  Nelson collages informative mythical stories, and fragmented instances from the lives of prolific painters, philosophers, and writers into this broad-ranging yet deeply intimate piece of writing. Bluets expounds on subjects as diverse as the female gaze, loneliness, and desire ; all of them tenuously linked by their association to the color blue, taking the readers through a kaleidoscope of emotions.

This affecting piece of lyric essay evokes conflicting feelings from tranquility to grief, culminating in a cathartic read. Talking about famous blue figures like Joni Mitchell, Leonard Cohen, and Andy Warhol on one hand and mentioning the sensory and scientific aspects of color perception, Bluets is slim in size but expansive in scope. The writer comes across as severely insecure in certain passages and self-aggrandizing in others. This illuminating book will make you re-think the role of aesthetic beauty in our affective experiences. 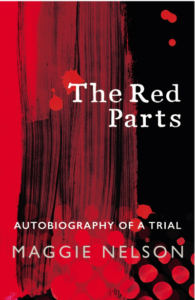 The Red Parts – This true crime memoir is a thought-provoking essay on America’s obsession with violence and a gritty account of the murder trial of the writer’s aunt. Nelson was looking forward to the publication of her poetry book comprising newspaper clipping, diary entries, and prose titled Jane: A Murder, when she got the call announcing that the case would be reopened. A new suspect was arrested and subsequently convicted of the murder and over the months that she attended this trial, Nelson was compelled to revisit her childhood and reflect upon society’s perverse fascination with pretty, young dead girls.

Nelson talks about the unexpected deaths of Jane and her father and how living under the shadow of such intense grief irrevocably altered her bereaved family’s interpersonal dynamics. The murder case had remained unsolved for 35 years, and therefore the re-opening of this trial feels like revisiting old wounds. As she reiterates, her family is not ‘after justice’, whatever that maybe, but are only there to bear witness. The problem may also lie with the word itself, as for millenia “justice” has meant both “retribution” and “equality”, as if a gaping chasm did not separate the two.

In The Red Parts, Nelson walks the tightrope between clinically narrating the rigorous forensic and legal trial procedures, and being painstakingly honest about her personal experiences. She constantly doubts her true intentions in exploring her family’s grief and unflinchingly observes the media circus that this murder trial inevitably becomes. This book is an autopsy of pop culture’s morbid fixation with violence against women and a feverish yet precisely astute exploration of voyeurism, misogyny and loss.