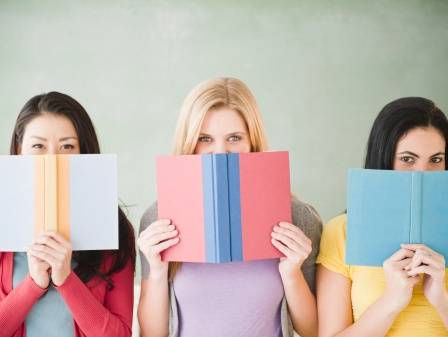 During my time as a university student, book clubs didn’t hold a lot of appeal for me. I was an English major, which meant that I spent multiple hours a week dissecting books, poems, short stories, etc., in a classroom with my peers, and a tutor at hand to help us along with ideas.

I’m also more of a silent observer, which meant that unless participation in classes was graded, I rarely participated in open-class feedback. Though I had a lot of ideas, I preferred to take in other ideas and listen, rather than continually participate.

After university, there was no space for me to discuss books anymore. I suddenly read at an even faster pace than before, without the obligation of essays and exams pressing upon me. But without an outlet for discussion, I felt stifled.

I tried to join groups on Goodreads, but the conversation there petered out too fast, barely leaving me satisfied. So when one of my friends from school asked if I’d be interested in starting up a book club, I was more than happy to say “yes!”

Maybe I had been slightly spoilt by the classes during my undergrad, which were fuelled not only by primary literature, but by secondary sources which had in-depth analyses of the literature at hand. More than that, those classes were informed by the anxiety of looming essays and exams. Exemplified by the fact that the busiest class of the semester was the week before essays were due, when those names on the register who had never peaked into class before, suddenly appeared, full of questions about the upcoming essay.

So our first book club pick was an early dystopian novel that most of us had never heard of before. It was called We by Yevgeny Zamyatin, and it followed many of the usual thematics of the dystopian novel. It was easy to see the point of trajectory from We to more well-known dystopian novels, such as Orwell’s 1984, and Huxley’s Brave New World.

Once the date arrived for our book club to meet, we piled into a cosy café that serves some of the best cheesecake in the city (according to me). And found out that I had been the only one to fully finish the novel, with two others close to the end, and everybody else not having even cracked open the spine of the book. It certainly put a damper on the book club, even as those of us who had delved into the book’s contents tried to catch the others up, and enter into a discussion.

Somehow though, we were all a bit too concerned with the prospect of cheesecake, to delve into the novel too deep. So other than a bare base discussion of did we like the book, what did we like about it, who was our favourite character… we didn’t get into the nitty gritty of it. We did, however, promise to do better next time, after choosing Patrick Ness’ A Monster Calls as our next read.

Being a huge fan of Ness, I was more than eager to delve into this book, finishing it only a few days after our first book club meeting. I waited around for the next one, eager to discuss the wonderful allusion to grief in the book, and to talk about what the soon-to-be-released book to movie adaptation might bring to the fore. But the next book club meeting? Well, it never happened. Constantly put off by plights of being busy, and needing more time to read the book.

So we picked another book. And another after. And never saw each other past that book/cheesecake club meeting. And though I loved the cheesecake, the book club did leave a lot to desire. Which is not to say that there will not be book clubs in my future – I’m still on the hunt. But maybe book clubs with friends are not always the best way to go about things. And maybe book clubs don’t quite work for everybody.