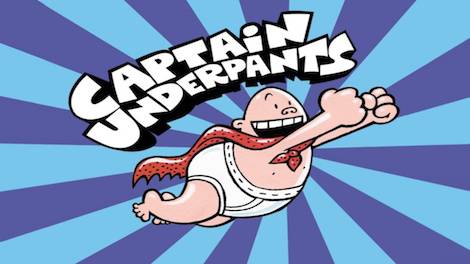 There’s a moment in Captain Underpants and the Wrath of the Wicked Wedgie Woman, the 5th book in Dav Pilkey’s ever-expanding saga of the tighty-whitie-clad crusader, where the main heroes, George Beard and Harold Hutchins, are tied-up with an an elaborate contraption set-up to ensure their eventual doom. George realizes the hatchet, held by a rope being slowly burned by a candle, is positioned so that it will simply cut through their bonds as opposed to chopping them both in half. Harold remarks, “that kind of thing only happens in really lame adventure novels,” right before the hatchet slices their bonds and they are set free. The boys look at each other sadly and decide not to say anything.

This is one of many moments populating Pilkey’s preposterously puerile paperbacks that acts as a wink and a nod to its targeted 8-13 demographic. These moments let the kids know, “Yes, this is all incredibly ridiculous. Can you believe this counts as reading?”

After 12 books and more spin-offs than you shake a dirty diaper at, Pilkey’s irreverent hero hit big screens with Captain Underpants: The First Epic Movie. Initial reviews seemed positive, with critics praising its manic pace and madcap antics. However, one criticism lobbied at the adaptation is that is comes off as quite conventional for a computer-animated kids’ flick. That’s quite a let-down, seeing as the series has a long-standing reputation for its rejection of the conventional.

One of the well-kept secrets of the series is that the enjoyment doesn’t come from the from bathroom humour itself, but from the overall freedom of it all. Sure, kids pick up the books to read about a grown man in his underpants attack a twenty-foot toilet with a plunger, but underneath it all is a celebration of creativity and imaginations run wild.

The average elementary or middle-schooler who picks up a Captain Underpants book for the first time knows the thrill of realizing this book is nothing like they’ve been forced to read before. The true heroes of the story, George and Harold, are two boys who have a problem every kid can sympathize with all-too-easily: they’re bored in school. So against the wishes of their teachers and tyrannical principle, they start writing comic books about the dumbest ideas they can think of. And this is where the books first ensnares its young, unsuspecting audience.

Suddenly, you’re reading several pages of a comic that looks like it was made by someone just like you: jagged lines, silly jokes, and even a talking dog or two. There’s no way this counts as a book, right? Most books are boring and have no pictures, but this book has comics and flipbooks inside it! And there’s punching and explosions and farts galore!  And they just let you take this out of the library?!

As it turns out, Pilkey himself was always bored in school, always being told, like George and Harold, to “sit down and keep you trap shut!” He was always told the doodles he made at school were a waste of time and his love of all this crude would never amount to anything. But Pilkey proved them all wrong. But his stories aren’t just about kids resisting their oppressive school system, but saving the world as well.

Captain Underpants isn’t just about laughing poops and snotballs. There’s an anarchic level of postmodernity as the books mock tired tropes and clichés. Plus the dialogue and humour is so snappy and witty, even adults have to acknowledge its cleverness.

What’s also amazing about this series is for all its potty humour, there is a distinct lack of potty-mouth. Even though the book titles (like The Perilous Plot of Professor Poopypants) promote body function-based gags, most of the laughs come from the ridiculousness of toilet time rather than in its end results.

The books were first published in the ’90s, when cartoons like Rugrats and Ren and Stimpy were getting laughs by depicting crudely-drawn doo-doos and throw-ups. And yes, Captain Underpants is not above showing a dog turd or Bionic Booger Boy, the crispness of Pilkey’s drawings (did I mention he draws everything as well?) keeps things arguably below a PG level. Even the kid-drawn comic book sections keep everything simple and relatively clean, never revelling in disgusting details.

And although most kids would never tell you this, the books have heart. While George and Harold love pranking and screwing with kid-hating principal, Mr. Krupp—whom they hypnotized into thinking he is the titular waistband warrior—they instantly recognize when things have gone too far. Most of the action revolves around them desperately try to rescue the Captain from his own madcap antics. And as the series goes on, there are some very tender moments. The kids care deeply for their oft-neglected grandparents, and there surprisingly sweet moments of reconciliation between the kids and some of their sworn enemies (most of whom end up becoming snot, wedgie, or zombie-themed super villains at some point).

Captain Underpants has left more than a little legacy after its 20 years in book stores and kids’ hearts. More recent series like Jeff Kinney’s Diary of a Wimpy Kid or Jeffrey Brown’s Star Wars: Jedi Academy have both made it to bestseller lists by aping Pilkey’s style of combining childlike doodles with relatable school-day drama. But nothing beats the original “extra-cheesy” nonsense, which has all the fun of flowing a raspberry while the teacher’s back is turned combined with the excitement of first learning that no, books don’t have to be boring.