I laughed, I cried, I lost myself in the gutters. Everyone loves a quippy one-liner or an over-the-top pratfall, but without some sort of greater emotional tethering, those are just jokes littered along the way of a larger story. For a comedy to really succeed in my mind, it needs to inform and heighten the story and, most importantly, the characters found therein. In other words, if you want to make me laugh, you’ve got to make me care. I’m a ride or die fan of The Simpsons (like most people of good taste) and have long held to the belief that what makes that show, ostensibly an animated situational comedy, so successful is its perfect harmony of heart and humor. Go watch the Season 7 episode “Summer of 4 ft. 2” and you’ll see what I’m talking about. Heartfelt, relatable experience married with lovingly structured jokes resulting in something that is truly funny. I’m always on the lookout for the comic book equivalent of this type of comedy homeostasis and while there are quite a few comedy titles out there, they more often than not tend to lean too heavily into rapid fire joke machines than something akin to a fully rounded emotional experience. And then I found 4 Kids Walked Into A Bank and suddenly I got those glittery anime eyes something fierce. 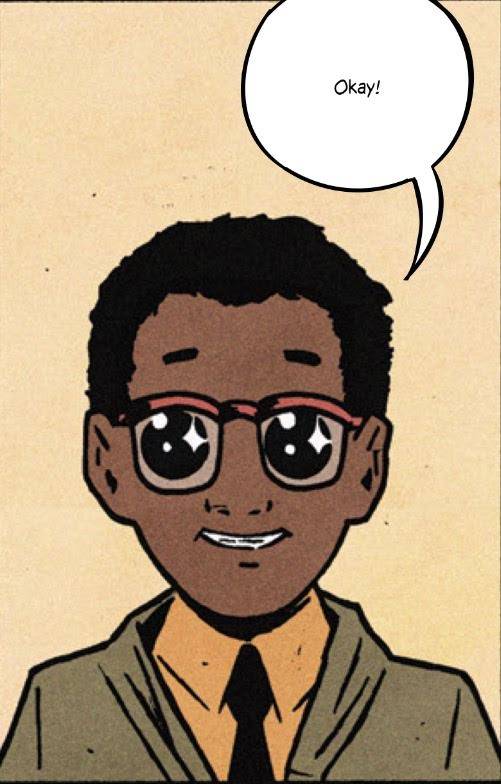 Writer Matthew Rosenberg, artist Tyler Boss, and letterer Thomas Mauer don’t rest on the laurels of having kids say and do outrageous things in order to get a laugh. South Park is a thing already after all. Rather, 4 Kids Walk Into A Bank is about sticking together. Four maladroit friends (or perhaps, three maladroit friends and the annoying asshole who keeps hanging around with them) get wrapped up in a heist scheme involving one of their fathers and, sure, hilarity ensues. But it’s their individual roles within their group and the resulting dynamics that really make all that hilarity sing.

The jokes in 4 Kids aren’t so much just jokes as they are full comedy scenes, but the key element to them all is that they almost always steeped in who these characters are and what they want. Take Berger for example, the aforementioned annoying asshole: he’s endlessly annoying and frustratingly frank, yet all of his unquestionably funny behavior stems from the same place: he just wants to be included. Berger sucks and his friends know he sucks, but they’re still his friend. There’s something charming about that relationship that simultaneously undercuts how grating he should be and strengthens how humorous his role actually is.

The real heart, the kind that really hits your feels with that uncomfortable grit, can be found in the book’s primary protagonist, Paige. Her take-no-shit demeanor would be rote if it wasn’t rooted in the all too familiar fear of loss. Paige’s mother took her own life and now she’s in a place where the threat of losing her father and/or losing her friends is becoming exponentially more likely. The more that feels real to her, the tougher she gets and the funnier her actions become. 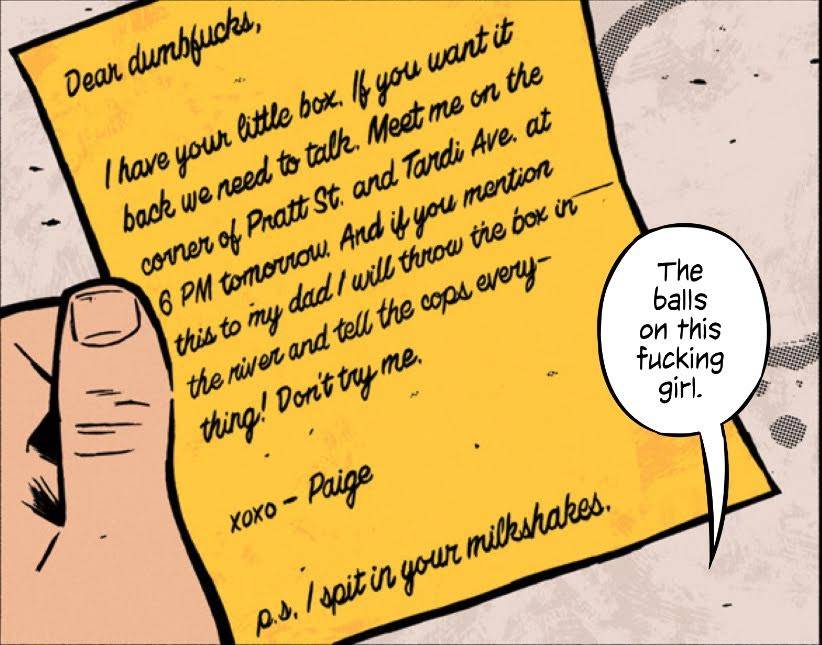 Rosenberg and co. go the extra mile in blending character building with visual humor by opening each issue placing these four friends in representational avatars. Issue one has them in the role of D&D characters for instance and subsequent issues put them in the bodies of video game fighters or remote-controlled cars or whatever toys are laying around. Having their voices come out of these stand-ins isn’t funny simply because they’re superimposed, but rather because each of these avatars are pitch-perfect delineations of who they are. Again, comedy is derived from and supports their individual traits and objectives. Of course Walter is a wobbly helicopter and of course Berger is troll who doesn’t even play by the world’s rules. Stretch is always trying to keep things together and in perspective, futile though that may be, as a dungeon master. Paige is always running forward headstrong with swords out or motors revved. Watching it all fall apart as real-world elements seep into these fantasy scenarios makes for laughs at the same time it reminds you that part of growing up is the creeping inability to stay in the fantasy at all.

Not only is the humor character-driven then, it’s also thematically driven. Growing up means things change and change is something most of us are pretty reluctant to give in to without a fight. Combine these themes of loss, friendship, and coming of age with the sharp irreverent dialogue by Rosenberg, paced beautifully by Mauer, and the fantastic sense of visual beats from Boss, and you have something that achieves a substantial balance of heart and humor. It’s not just a relentless barrage of jokes or gags, instead it becomes a structured comedy experience that leans more on who is saying or doing something funny. I won’t risk explaining a joke to the point of making it unfunny, but take a look at just how Boss manages to control time on this page with repeating images that differ only in the slightest from panel to panel: 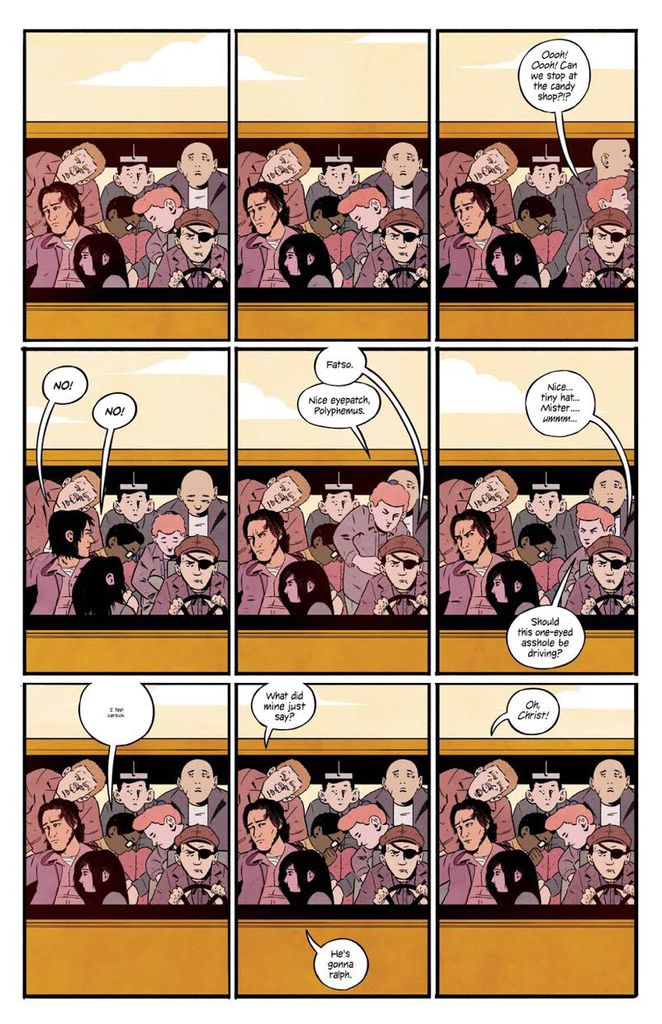 You get a little bit of everything here; Paige and the gang leader issuing the same order, Berger being, well, Berger, Walter’s meek warning of sudden stomach expulsion, and Stretch quietly eyeing everything in fearful assessment. It’s a funny enough situation on its own, but the manner in which that humor is reinforced and propelled by the character dynamics is what makes it really work.

4 Kids Walk Into A Bank strikes that much needed balance between comedy and emotional resonance that soothes my funny bone and soul alike. I care about these kids because I get these kids. I’ve felt like a weirdo. I’ve felt like things were changing too fast and turning my world upside down. Hell, I’ve definitely been a pain in the ass too. When I look back at some of the ridiculous things my friends and I did over the years, it’s hard not to laugh. You get by with a little help from your friends, and sometimes, that’s pretty damn funny.