Comic books are full of bad mothers, from the outright abusive to those who simply aren’t present. Want examples? Okay. Lady Shiva, assassin, sadist, and biological mother to Cassandra Cain. In the current run of Detective Comics, Shiva, while attempting to destroy Gotham, beat her daughter senseless and left her for dead. In the Marvel universe, Dorothy Walker’s exploitation of her daughter Patsy (aka Hellcat) through a series of “fictionalized” books is steeped in ickiness. Worst still, before her death Dorothy granted controlling rights to the character and image of her daughter to Patsy’s frenemy Hedy. Ugh. And finally, Barbara Kean Gordon, mother to Babs (you can call her Batgirl), has been retconned so many times it’s hard to keep track of what the actual circumstances  of her abandonment are. One thing remains consistent, whether she died in a car crash or simply left Gotham, she’s an absentee mother at best.

As someone lucky enough to have an awesome mom, (Hi Mom! Because of course she reads all my posts, I told you she was awesome.) I’ve always been really sad about the dearth of good mothers depicted in comics. So, perhaps a different set of criteria on who is awarded the title of “mom” is in order. Here are some of the best “moms” who aren’t mothers in the world of comic books. 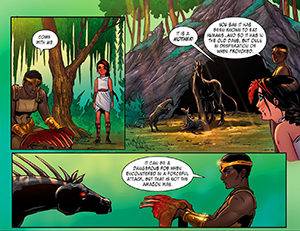 Not all mother figures are kind. Alcippe is the captain of the Queen’s guard as well as the “mightiest of brutes” within the training circle of Themyscira. She is Dianna’s mentor and teacher, and instills within the young princess an unwavering sense of honor. Her hesitancy to be a part of Dianna’s life is portrayed with realness and humanity, and all the more powerful for it’s delay.

Superhero, rockstar, propensity for violence – doesn’t exactly inspire confidence in maternal capacity. Frankly, at the beginning of Black Canary, Dinah is a mess. She grows. She’s always wanted to protect and keep her bandmates safe, but she learns how to trust them as well, and that’s when their relationship changes. Ditto especially brings out Dinah’s patience and protective mom vibes, but she really does mother the entire band by the end.

The Angela (Asgard’s Assassin, Queen of Hel, and 1602) books are among my favorite comics of all time. Most of that is about Sera. Kind, fierce, loving, and witty, Sera is the coolest Beyoncé quoting, lightening bolt throwing, sorceress you ever want to meet. While conquering Hel, Sera and her lady love Angela rescue Hela’s handmaiden, Leah. The three soon set up a home in New York, complete with Helhound Thori, and create a sweet little lesbian nuclear family. Seriously, it’s adorable.

Can you even imagine if She-Hulk was your mom? How do you argue with someone who can punt you to your room without dinner? If you’re Nico, Singularity, or Dazler, you don’t. Heck, even Captain Marvel shies away from Jennifer when she’s laying down the law (see what I did there). But for every time Jen loses her temper, she’s also the woman who is willing to sacrifice herself for the wellbeing of any of the women she’s accepted responsibility for. Her relationship with Singularity is particularly sweet, and reveals a playfulness that isn’t often associated with She-Hulk. 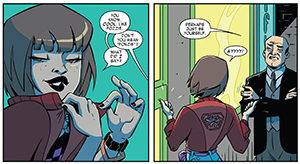 I love Jarvis in all forms. Edwin Jarvis, butler to Howard Stark and coconspirator of Peggy Carter. J.A.R.V.I.S., Tony Stark’s loyal and sarcastically dry AI. And I love Unstoppable Wasp‘s Jarvis, who in my mind is the love child of the two previous versions with a bit of Phil Coulson thrown in. Watching the unflappable butler try to help Nadia and her team of G.I.R.L. scientists is a bit like watching a cat herd squirrels. Most recently his insistence on the wearing of seat belts whilst trying to defuse a bomb was probably the most “mom” moment yet.