When I was a kid, the first season of the Pokémon anime regularly made me cry. I was the revered monarch of a Beanie Baby plush kingdom. My mother often fought with McDonald’s employees so I could get the “girl toy.”

When people invoked the phrase “boys will be boys,” they never meant me. The expression implies a certain male standard, one that usually means “rowdy” and “aggressive;” in a sense, patriarchal. Boys, and the men they’ll grow into, are expected to follow the heteronormative factory settings.

Intrinsic to these ideals of “male” traits is an image of strength. Boys are rowdy and aggressive because they’re just naturally dominant, so people suggest. Men teach boys to be “strong” by uncompromisingly taking whatever is deemed theirs, which is apparently anything not poisoned by the color pink. Any male person who falls from this ideal is the opposite of masculine and strong, they are feminine and weak. They are “gay.” (Even if all three of these things are totally irrelevant to one another.)

Boys and men can be clocked as gay (and feminine and weak, they’re all considered interchangeable at this point) for doing anything that deviates from the masculine norm. In my experience, this includes: wearing pink, purple, or shorts that don’t fully cover the knee; being European; befriending someone who’s gay; smiling; coming within five feet of something pastel; having pronounced eyelashes; hitting a dodgeball the “wrong” way; getting hit with a dodgeball; not liking Mountain Dew; touching glitter, looking at glitter, or even contemplating glitter; failing to grasp the nuanced comedy of Dane Cook; having the lowest score in Halo 2 multiplayer; and punching with too much hip. 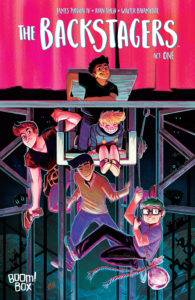 The Backstagers #1 cover by Veronica Fish

A man who is feminine or gay or both (gasp!) can have titanium strength forged from adversity just as a man with “broad-shouldered leadership” can be weak. But you’d never know that if you paid attention to mainstream media, particularly stories dealing in genre.

Take a look at the modern superhero film canon, which is not only overwhelmingly dominated by straight white men, but straight white men sitting on the closed range of Hyper-Masculine (Iron Man, Star-Lord, Wolverine, Batman) to Diet Masculine (Captain America, Superman).

Repeat with every mainstream action-adventure/fantasy/genre story across film, television, and comics. The few successful deviations of this male formula come in sexuality, but not trappings. Midnighter’s success as DC’s first gay male hero with a solo series is undoubtedly buoyed by him sharing the hyper-masculine aesthetic of his straight peers. His oft-damseled boyfriend Apollo, rendered “more feminine” more by narrative tropes than anything else, has not had such success.

At times, it feels as if you’d have better luck getting monkeys seated at a typewriter to randomly bang out works of Shakespeare than you would waiting on multiple male-dominated industries to write a leading male protagonist who blushes.

Luckily, there are exceptions, and one sparkling example is James Tynion IV and Rian Sygh’s The Backstagers, which concluded its run just last month.

The series opens with ostensible lead character Jory hiding in some bushes while talking on the phone to his mother. He’s terrified to his first day at the all-boys St. Genesius Preparatory High School.

“Mooooom, please,” Jory says to his mother. “Just come pick me up. I want to go home. There are boys out there.” 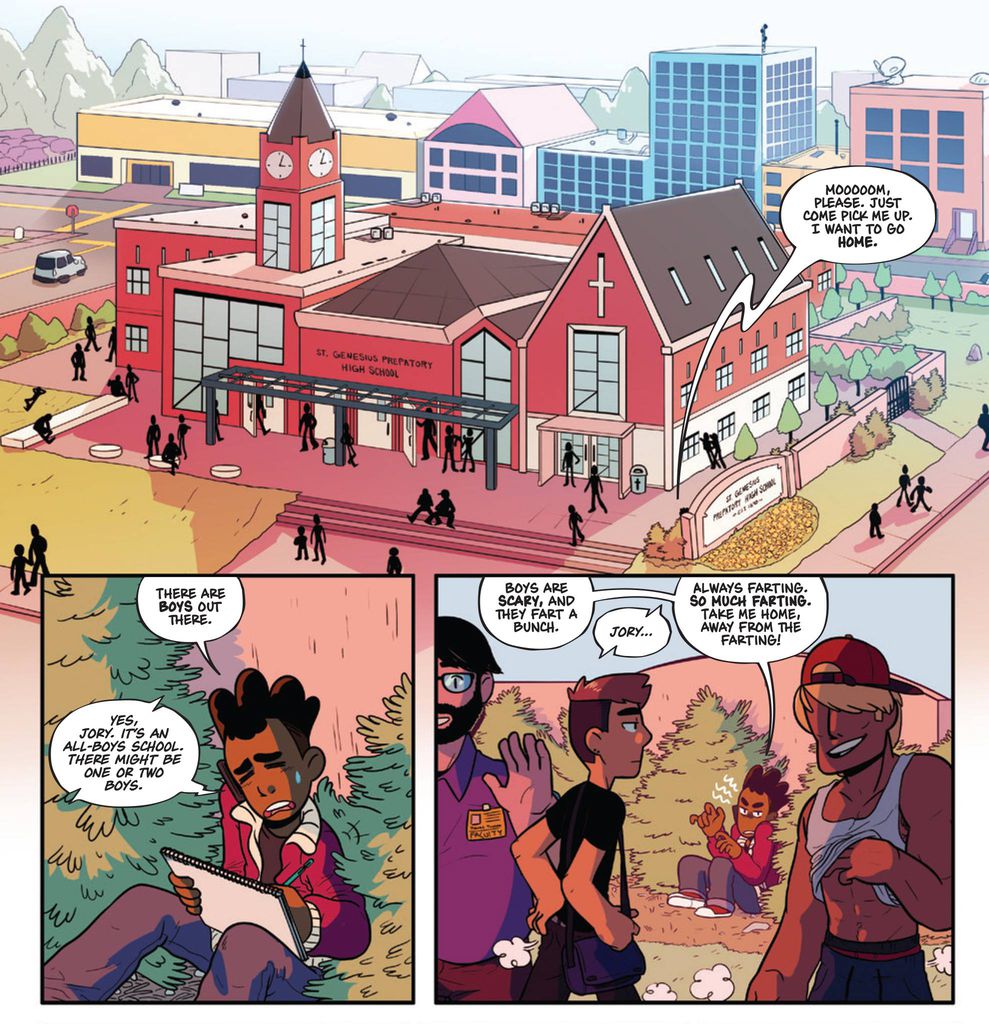 “Boys are scary, and they fart a bunch,” he says, with guys farting in the panel’s foreground. “Always farting. So much farting. Take me home, away from the farting!”

As a queer dude who’s spent much of his life dodging male-dominated spaces for the sake of his well-being, I feel this. You see, friends, the farts aren’t just farts, they’re patriarchy and male privilege, putrid products of the inability to care just whose space you’re clouding up.

Nary a page passes by in this series where one of the Backstagers boys isn’t overtly emoting. Jory’s probably panicking, Hunter’s definitely flirting, Sasha’s doing something that warrants anime sparkles, and even even-keeled Aziz finds a moment to cry — and none of this is later frowned upon or chastised, but embraced. Sygh’s shoujo sensibilities heighten the emotion without once mocking it, and Tynion’s script portrays the boys’ many feelings as strength — in their communication, compassion, teamwork, friendships, and heroism.

Other male-centered properties would paint these moments as a punchline or weakness. The only Patriarchy Approved™ male emotion is anger, because then it’s used to precipitate punching or vengeance (that often involves punching).

And there is anger in The Backstagers, but it’s not used a sexy precipitant for sexy violence; it’s portrayed as a messy, frustrating emotion that’s not superior to reason. An angry outburst by lights manager Beckett scares sensitive Sasha to flee backstage to somewhere unsafe. When Sasha’s best friend Aziz finds out, he’s furious, but he doesn’t use his anger to punish Beckett; he openly voices his pain, his friends acknowledge it, and they leave together to rescue their lost friend. 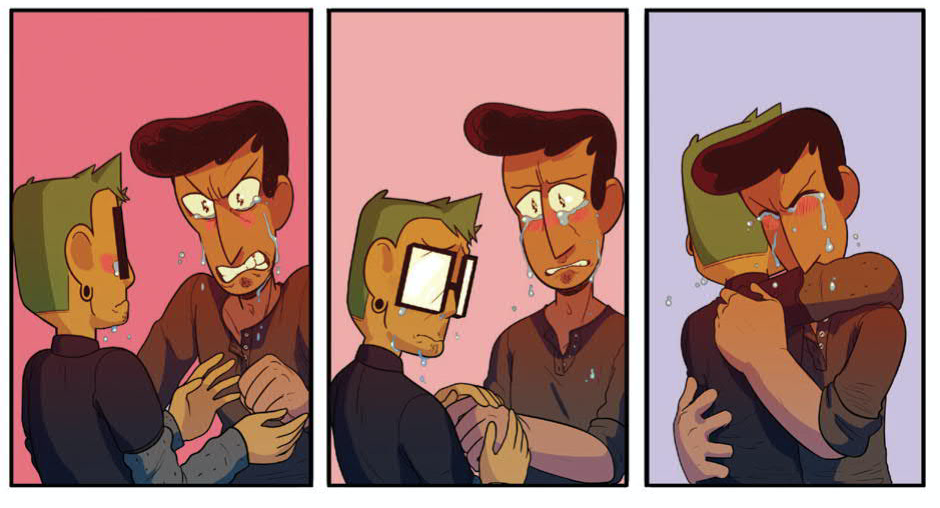 There are multiple queer characters in The Backstagers — Hunter and Jory are a couple, Beckett is a trans guy, Sasha is anime — and it’s never a point of contention, some hurdle for a straight peer to overcome or source of emotional angst. They all get to be strong and invulnerable, as complex people tend to be.

Like the boys in The Backstagers, I too attended a Catholic high school and found refuge in its theater program. I did not have to choke down my emotive, expressive personality like I did elsewhere, and when I eventually came out as gay, I found unequivocal support. For essentially the first time, I had a place where I could fully be me.

I rarely feel that sense of safety or congruency when I page through monthly publishers’ solicits and read their comics. Entire major line-wide events regularly rest on thinly-developed macho posturing that could’ve easily be handled by characters with any sense of emotional self-awareness. Creative stabs at Superman or Captain America, in both cinema and comics, seem bent on manning them up or punishing them for their emotional vulnerability. It’s asphyxiation by Axe body spray.

With the curtains now closed on The Backstagers’ run (and no immediate encore in sight), I’d like to see the industry, its innumerable male creators in particular, take up its legacy and do better by male emotional and queer representation. The show must go on somehow, and I think it’s time to cast male characters in new and better roles.