A couple of months ago, I stumbled on a post on tumblr about a book called Star-Crossed by Barbara Dee. The post was written by Barbara Dee’s daughter, and talked about how she had come out to her mom as a teenager and how supportive she had been. Years later, her mom told her about a book she was working on: a middle-grade novel about a girl in 8th grade who realizes she has a crush on the girl playing Juliet in their class production of Romeo and Juliet. 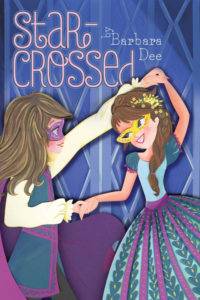 It sounded really cute, and the cover looked adorable! I was excited about the book, but I don’t usually post about unreleased titles, so I was waiting until closer to the release date to reblog it. Meanwhile, I kept seeing it on my dashboard–making its rounds even outside of book tumblr. A few months later, it had racked up more than 100,000 notes (likes or reblogs). That is more than I’ve ever seen on a post about a particular book, nevermind one that hadn’t even been released yet! People were over the moon about a sweet middle grade book with a girl who gets a crush on a girl! That’s rare enough. But a kids’ book about a bisexual character? It’s simply not heard of. I remembered the Bisexual Books tumblr relating at some point that as hard they had looked, they couldn’t find one (ONE) bisexual book for kids. (Since then, Trials of Apollo by Rick Riordan has come out, which is primarily a middle-grade novel, but it does have a bi teen protagonist.) Trans, lesbian, and gay books for kids are pretty rare, but you can find at least a few picture books that do include them.

So this is very exciting! Star-Crossed is coming out (ha), and it will be such a huge step for representation, both for bisexual girls and girls who like girls in general! Barbara Dee has begun making appearances at schools to promote her new books. Unfortunately, the only reason I know that is because Barbara Dee posted about an experience at one of the schools. The title is “Please Don’t Talk About Your Book”.

Two years ago, I wrote a post called Kids Need Queer Books: On the Challenging of LGBTQ Books In Schools. I wrote then that I was tired of stories like this, and I’m even more tired now. Barbara Dee was told not to talk about her book–a book that Scholastic will be carrying in school book fairs, that is recommended for ages 9-13, and is blurbed by big-time middle grade authors like Gail Carson Levine–because of fear of “parental backlash.” That same teacher later apologized to the students Barbara Dee had previously talked to about Star-Crossed.

I’m outraged for the principle of the thing, of course. LGBTQ people are not “adult” topics. LGBTQ children exist. In the crowds of hundreds of children that Barbara Dee talked to, there were bisexual kids listening. Some of them may even be out! It’s a whole new world. Some aren’t aware yet. But all of them would benefit from hearing that bi people exist. That bi children exist. That it’s not weird or wrong to have a crush on someone of the same gender. That you’re not alone. And the straight kids in that crowd would benefit from hearing it too, if only to be better to the gay and bisexual people they encounter in their lives.

And that’s what really makes me angry. Not the principle of the thing, but the material consequences. In that school, there were kids in the first talk who recognized themselves in the story. Kids who came up to Barbara Dee and talked how excited they were to read it. How they were going to ask for it as a birthday present. How many of those kids later felt ashamed when the teacher apologized for Barbara Dee mentioning the book to them? How many kids heard that speech and felt that relief of recognition drain away to be replaced with a knot in their stomach? How many kids in the second and third groups never even knew that they missed out on that recognition, missed out on feeling like they were normal and loved and going to be okay?

Kids need queer books. And keeping those books away from kids has real, devastating consequences. The reason that original post got so much attention? People were talking about how much reading that story as a kid would have improved their lives. Star-Crossed will help a lot of kids. But it has to get into their hands first.