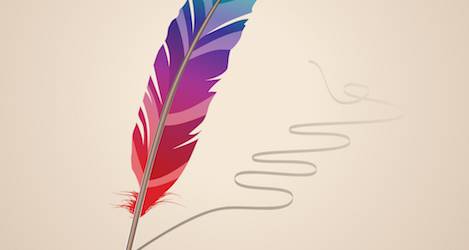 We could all use more poetry in our lives, and more poets.

Especially when the world seems—is—grim, poets do the hard work of seeing the world and imagining it back to us, so we can see it for ourselves, or try to. So read more poetry. Buy new books of poems. Subscribe to literary journals. And seek out authors doing new things with words and with worlds. Twitter can help you with that last one, at least, making it easy to get more poets and their poetry in your life.

So here are four of my favorites, to get you started:

Following Kaveh Akbar is the best deal around on poetry Twitter. First, you’re following an amazing writer who writes challenging, fascinating poems (“filthy with pride I am standing as ever before watch / me sing through the jaw of a mouse”). And then, on top of that, you also get exposure to poems by other amazing poets. Every day, Akbar tweets out poems by diverse poets writing in a wide variety of styles:

Akbar’s Twitter feed is like a daily digest of interesting work, a social media master class in poetry. And all for the low, low price of clicking “Follow.”

And while you’re at it, check out Portrait of the Alcoholic.

You know I love Morgan Parker’s poetry—her There Are More Beautiful Things Than Beyonce was my contribution to Book Riot’s most anticipated books of 2017 list. (Btw have you read it yet? Because you really should.) Parker is a Pushcart winner, an NEA fellow, and curator of a totally [praise hands emoji] Twitter account. It’s politically and artistically engaged:

so proud of how chill & patient my dog is traveling, tho he has no idea wtf is happening/ why he is in a bag. Is this how parents feel

Both of those things at the same damn time, which is both the beauty of Parker’s Twitter and, I suspect, one of its points.

Jayy Dodd is a vivid and beautiful writer on gender and blackness (“My gender is going to the corner store in oversized black thermal with jean booty shorts revealing a landscape of thick black thighs, my long slender hands punctuated with royal purple polish, & my lips a severe black matte & being called baby. Or sweetie. The next day, my gender is grungy sweatpants & tall white t-shirt with backward fitted cap, nails still royal, lips now bare & being called bro. Or buddy.”) and a stunning poet (“no longer can you call me a beast of this earth / this tender flesh is not satisfied by the harvest / in my mouth — now abundant — is milk & honey“). If you’re interested in either of those things, you should be following them on Twitter. (And, by the way, Teen Vogue agrees with me, in case that sways you at all.)

i’m an international woman but a domestic man & a transatlantic person.

Pico is author of the recent IRL and upcoming Nature Poem—the latter is incredible, people: just check out these excerpts—and co-host of the filthy, delightful new podcast, Food 4 Thot (“Like NPR, on poppers”). With that resume, it probably shouldn’t be shocking that Pico’s Twitter contains multitudes.

You love to act like what u did to us was in the past https://t.co/amm1dHXrkI

And filled with other amazing poets and creators:

And oh so real:

godamn i had such a crush on josh hartnett. had, yeah that's it TELL NO ONE

So there are four poet-tastic Twitter accounts to get more poetry into your life. Follow these ones, then follow the poets they retweet, and so on, and you’ll be well on your way to an enriched and poet-filled online life.