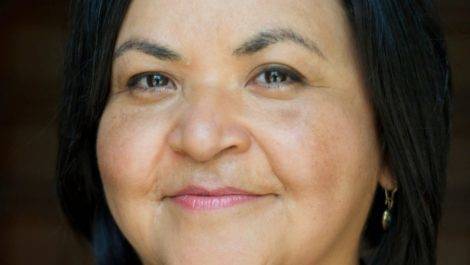 If you have any preconceptions at all about Canadian literature—and I realize most Americans will have never thought about this—you might be thinking about white guys writing nature poetry and colonialist fiction about conquering the land. I’d like to introduce the ultimate antidote to you: Eden Robinson. A member of the Haisla and Heiltsuk nations, Eden Robinson is an Indigenous and Canadian writer who was the first author I read who really made the place I grew up in—the Pacific Northwest—feel like somewhere mysterious and fascinating enough to be the setting for remarkable works of literature.

Robinson’s writing is darkly funny, poignant, brutally honest, and versatile. I’ve never read another writer who so flawlessly combines tenderness with toughness. She’ll have you laughing on one page, distraught a few pages later, and then marvelling at the wonders of the universe next. While her books are always firmly rooted in place—whether that’s Vancouver’s Downtown Eastside or the Northern Coast of British Columbia—there is also always something magical about them. Talking trickster crows, nighttime visits from visionary Leprechauns, cannibalistic half human river otters, and the darkness of the original Grimms fairy tales: you’ll find all this and more in her work.

She also writes some of the best dialogue I have ever read: it’s tight, achingly real, sometimes a punch in the gut, and often hilarious. Take this excerpt from her latest novel Son of a Trickster that takes place when the main character Jared is a little kid getting dropped off at his Grandma’s house:

“He’s a walking dick these days,” Nana Sophia said. “Thank you, Viagra. I hope his heart pops like the cancerous zit it is.”

“Fine. No cookies and no unpleasant truths. Dry toast and stern lecture for everyone.”

Probably surprisingly for readers new to Robinson, Son of a Trickster also contains passages like this:

Close your eyes. Concentrate on your breath. Remember that you were not always earthbound. Every living creature, every drop of water and every sombre mountain is the by-blow of some bloated, dying star. Deep down, we remember wriggling through the universe as beams of light.

Let me introduce her books to you, and then you can add them to your TBR asap. 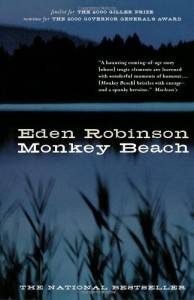 Monkey Beach is a kind of coming of age story about Lisa, a nineteen-year-old Haisla woman dealing with her brother Jimmy’s disappearance on a fishing boat and the nighttime visits she gets from a miniature red-headed man who tells her about catastrophic future events.  It’s real and gritty at the same time as it weaves Haisla mythology and Indigenous-inspired magic into Lisa’s life. It’s also a lot about her relationship with her grandmother, how easy it can be to slip into trouble, and the natural beauty of Haisla territory. Lisa eventually sets off alone in search of Jimmy, heading for Monkey Beach, a shore famous for its supposed Sasquatch sightings, to disastrous results. 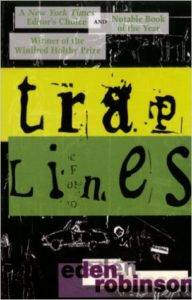 Traplines is Robinson’s first book and it’s a collection of four longish short stories, one of which is the seed for Monkey Beach and another which led to her second novel that I’ll talk about below. The stories often look at the underbelly to family life and are somehow both gripping like the very best thrillers but also very thoughtful and socially conscious, qualities that can be lacking in that genre. The characters in these stories are caught on the edges of society, dealing with violence, addiction, and despair, while Robinson somehow manages to take on depicting their lives with an unbelievably steady hand and surprising humour. 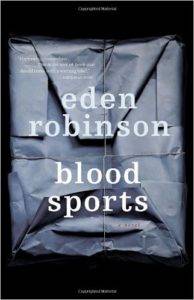 Blood Sports is a chilling and brilliant revised fairy tale about lower-class white folks in the Downtown Eastside neighbourhood in Vancouver, which was classed at the time Robinson was writing as the most dangerous place in Canada. This is definitely Robinson’s most disturbing work, one I wouldn’t hesitate to put in a horror/suspense category. In essence it’s about a couple trying to clean up their lives after getting off drugs but this is pretty hard to do when you live where they do and one of your cousins is a manipulative psychopathic drug-dealer who’s also one of the only people who’s ever cared about you. 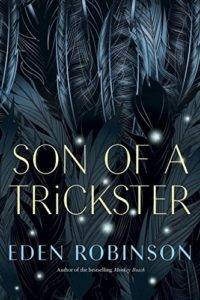 Son of a Trickster just came out after many years without any new fiction from Robinson. This novel is SO worth the wait. It’s about Jared, a sixteen-year-old burnout who drinks too much and smokes too much pot and lives on the rez with his mom, who he can’t trust to not bail on him and the bills or to not beat up guys who admittedly deserve it. But Jared is not a stereotype and not what an outsider would think: he’s also an incredibly compassionate person, to the point that others take advantage of him, and a person simply in search of not wanting to hurt or be hurt. All this coming-of-age story is incredible in and of itself, but the small magical touches that Robinson has sprinkled throughout the story suddenly burst to the forefront of the narrative in a totally unexpected way at the end, making you glad this book is the first in a new trickster trilogy.