Recently my fellow Rioter Charles Paul Hoffman wrote an excellent article about why Marvel needs to cool it with company-wide events. Although massive crossovers like Marvel’s upcoming Secret Empire may be a short-term marketing dream, the weird insistence on canonizing the changes across all books (at least until the next major event) can be a huge turnoff for readers like me who don’t have the time or disposable cash to keep up with every story thread.

Still, I have to admit that I do love watching my favorite characters from different books meddle in each other’s lives. So here’s what I’m proposing to any comics company looking for an “event” to drum up publicity: a single-issue (or limited series) non-canon crossover between two totally unconnected universes. The wackier, the better. Bonus points if it’s a crossover with a different publisher (DC and Marvel have made some glorious messes doing this in the past). And hey, I’ll even throw in a few examples (no need to thank me, Marvel!):

Doreen Green has defeated Dr. Doom, Thanos, Galactus, and dozens of other Big Bads from the Marvel Universe; Saitama has honed his superpowers to the point of defeating any enemy with just one punch. Heroics have lost all their fun for Saitama, who feels existentially threatened by the lack of challenge in his life; being an Avenger is all the irrepressible Doreen has ever wanted. Together, they fight crime! And discuss the absurdity of living in a universe where monsters knock over skyscrapers every couple of weeks or so.

Tokyo Ghoul and other books about eating people (There are… several.)

Stomach-turning scenes of the consumption of human flesh won’t be for everyone. But if you grinned maniacally at that last sentence, you’re the kind of weirdo books like Tokyo Ghoul and Chew are made for. Student Ken Kaneki and detective Tony Chu both, um, eat people, though it’s not like they want to – Kaneki’s been infected with the blood of a flesh-eating monster and Chu can learn what happened to murder victims by taking a bite out of their corpse. I’d love a crossover set early in both series, while Kaneki is struggling to find an ethical way to keep himself alive. Maybe Amelia, the food critic who can make her readers taste the food she’s writing about, could help Ken just as she helps Tony?

If you’re not in the mood for a hopeful ending and/or food-based superpowers, we could cross over Tokyo Ghoul with that other not-really-about-zombies book, Cannibal. The urban ghouls might find it a bit harder to hide from the locals in Cannibal’s rural setting. Plus, given America’s politics lately, a clever writer could assemble some stinging metaphors from the grisly city-country conflict. 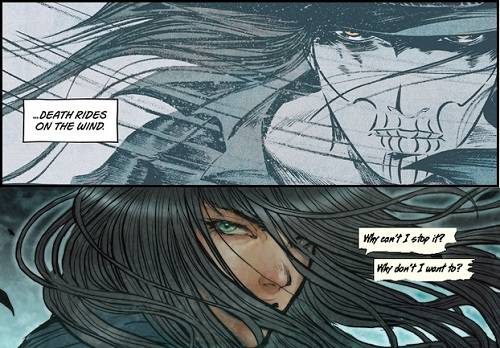 Coherency fails me when I think of just how badass this would be. Preternaturally powerful women fighting hostile factions, old gods, and the loneliness in their own hearts? Majority-female creative team? Stunning artwork? Be still, my heart.

Yu-Gi-Oh! and Hikaru no Go 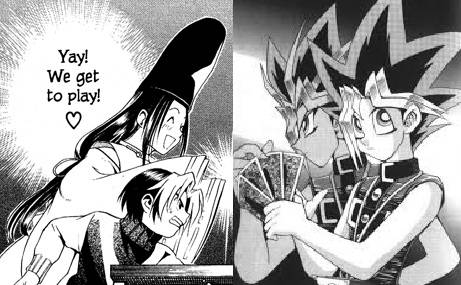 Left: Hikaru and his ghost-pal Sai drawn by Takeshi Obata; right: Yugi and HIS ghost-pal, the Pharaoh, drawn by Kazuki Takahashi

“Popular late-‘90s YA manga about a teen boy possessed by an ancient ghost who is really, really good at winning games” seems specific enough to lead you to a single title, doesn’t it? What tickles me most about this crossover is that these two series are vastly different in tone. Yu-Gi-Oh! pits its characters against ancient evil in (sometimes literally) cutthroat gaming challenges. Hikaru no Go, on the other hand, is a gentle coming-of-age story about a boy who finds his purpose playing the chess-like game of go. But both protagonists ostensibly live in the “real” world, where it’s not normal for kids to talk to spirits, and both of them struggle with whether and how to reveal this to their friends. Imagine how they’d feel if they met someone who understood.

Neil Gaiman’s Sandman and BASICALLY ANYTHING