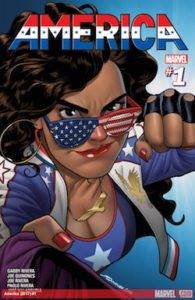 1. America #1 might be the queerest comic I’ve ever read. That, my friend, is saying something. I expected some aspects of LGBTQ awesomeness – it’s America Chavez after all – but we’re talking literal rainbow flags and make-outs, two moms and more snapbacks than you can shake a stick at. It is glorious. I practically expected someone from the USWNT to make a cameo.

2. Guest appearances by Kate Bishop, Prodigy, Monica Rambeau, and Miles Morales, just to name a few. The friendship between America and Kate is one of my favorite aspects of both their stories, and this is no exception. There’s a sweet moment of honest affection here that made me smile. Also, the art in America #1 is seriously good. I’m particularly digging Jose Villarrubia’s colors.

3. People of color on the creative team of a book about a PoC. Amazing concept, right? I know there are plenty of people who think this doesn’t matter, especially in a comic book, but they are WRONG. Full stop. America wants to be the best version of herself. “I want to be better, you know? Smarter. Stronger. Just better.” I can’t help but agree with Kate that this America is “already one of the best,” thanks to an awesome team of creators. 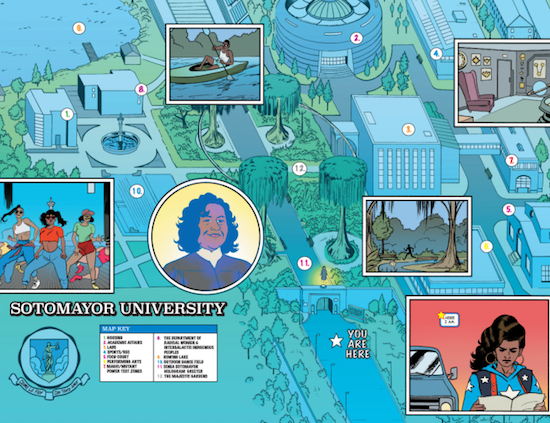 4. America chooses to go to college. It’s very clear that she realizes that she can’t punch her way out of every problem in her life, and that leaving her current life is a mile outside her comfort zone. The college she chooses is Sotomayor University. As in Associate Justice of the Supreme Court, the honorable Sonia Sotomayor. I love this.

5. Actual, honest to goodness, Hitler punching. Nazi’s should always be punched, and hey if Cap is falling down on the job… Seriously, the last panel leaves readers with no question as to the political leanings of this particular team. Not that the rainbows and general Latinx badassery left a whole lot of doubt.