Antisemitism, it seems, didn’t disappear with the dawn of the 21st century.

It is easy to say that these events are random. They don’t mean anything. They are simply pranks. They weren’t intended to be antisemitic. But in the 1930’s, people didn’t think that the mass murder of European Jewry would occur either. So as we try to combat modern antisemitism, we face several questions. How did the Holocaust happen? How did seemingly good men and women do evil? And how can we prevent an atrocity like that from happening again? Several books have tried to answer these questions, and I want to share a few of them here.

A word of warning: these are not pleasant reads. They involve stories of torture, murder, and human suffering. There are often pictures. Books like these help us understand the past, but they won’t make you feel better about human history. 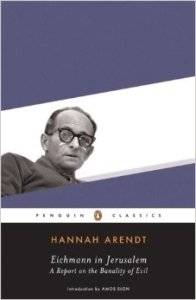 Eichmann in Jerusalem: A Report on the Banality of Evil by Hannah Arendt, 1963

Hannah Arendt, a political theorist who fled Germany when Adolf Hitler came to power, wrote in her book The Life of the Mind that “the sad truth is that most evil is done by people who never make up their minds to be good or evil.” Eichmann in Jerusalem allowed to Arendt to first give form to this idea. The book looks at the trial of Otto Adolf Eichmann, a Nazi SS officer who was one of the primary organizers of the Holocaust. Arendt finds that Eichmann was not a fanatic but merely someone who saw himself as doing his duty, obeying orders, and following the law. His actions were simply “the banality of evil.” It was that very banality that allowed the Holocaust to occur.

The Good Old Days: The Holocaust as Seen by Its Perpetrators and Bystanders, edited by Ernst Klee, Willi Dressen, and Volker Riess, 1988

This edited volume contains items written by the people who made the Holocaust happen. It features diary entries, photographs, letters, interviews, and other documents from German eyewitness and members of the SS. The book reveals that these people were perfectly aware of the systematic murder of innocents. As the forward says, “This is a horrible book to read, and yet one that should be read.”

This book follows Police Battalion 101, a unit of middle-aged Germans, who participated in the murder of thousands of Jews. These German draftees were not acting in some uniquely evil way but instead were typical men. They were at turns, cowardly, indoctrinated, nationalistic, loyal, and dutiful. Before the war, no one would have expected them to participate in mass slaughter. The horrifying implication of this book is that what happened in Germany could happen elsewhere. Other “ordinary men” could cause other genocides.

Full disclosure: Browning was once one of my professors. Ordinary Men is still a groundbreaking look at the psychology of Holocaust participants regardless of my connection to its author.

The Killing Compartments: The Mentality of Mass Murder by Abram de Swaan, 2015

The Killing Compartments asks how mass murders happen. De Swaan argues that mass murders like the Holocaust and Rwandan genocide are different than other types of violence. They occur with the full support of the authorities. The social structure of society encourages them. And the participants work in large teams that allow for little dissent.

These books paint a dark picture of humanity. They also indicate that struggling against evil involves understanding why events like the Holocaust occur. Though we like to imagine that we can recognize the people who would commit atrocities, those same people may be our friends, neighbors, and coworkers. They are, as Christopher Browning would say, ordinary men and women.

So what do we do now? What do we do when genocides occur? How do we prevent them from happening again?

The answers to those questions may be found in these last books. The first describes how culture and knowledge can survive in the most terrible of circumstances. The second provides a path for stopping other atrocities. 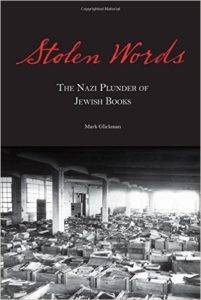 Stolen Words explores the ways that Nazis stole Jewish books and culture. Instead of burning all of these books, the Nazis stored many of them in warehouses, abandoned castles, mines, and other places across Europe. After the war, Jewish scholars, including Hannah Arendt, worked to redistribute these books and connect Holocaust survivors to their past. Despite the devastation of the time, the Jewish community and their knowledge survived.

“Preventing mass atrocity is an achievable goal, but only if we have the collective will to do so,” Waller asserts. Global citizens have a responsibility to prevent these crimes from happening. They can do this by acknowledging crimes when they occur, interfering when necessary, and making sure that they do not forget genocides that have happened in the past.

Silence is dangerous. If, however, we speak up when it looks like a mass murder will occur, we might stop it in its tracks. So allow yourself to have a voice. It does make a difference.