Three books with women main characters who are allergic to marriage:

“Don’t you want to marry, Portia?”

“Not particularly, but if I do, he’ll have to be an exceptional fellow who loves me for my intelligence and business acumen, not for how I perform on my knees. ” 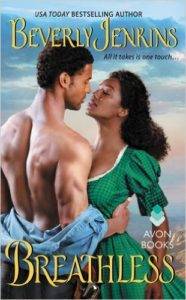 In Breathless, the second book in Jenkins’ Old West series, Portia Carmichael is a hotel manager who has worked hard to gain a position of respect in her town near Tucson in the Arizona Territory. After a tough childhood, security is more important to Portia than love, dashing the hopes of her many potential suitors. But when old family friend and reformed playboy Kent Randolph comes to town looking for work, all bets are off. Jenkins’ signature attention to historical detail and rich worldbuilding support, but don’t overwhelm, the romance. Best for patient readers who like a rich tapestry of a book. A very sweet opposites attract romance with some darker themes.

“Not every girl who attends a ball wants to be Cinderella.” 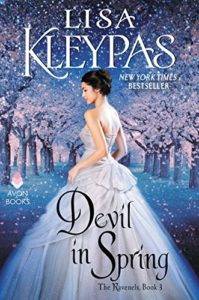 You know that feeling, when a book is so hyped that you are actually kind of skeptical of it, even though you love the author? That was me and Devil in Spring (book three in The Ravenels series), which features the son of the rakish hero one of Kleypas’ most beloved books, The Devil in Winter. Kleypas was inspired by the story of Lizzie Magie, the uncredited woman inventor of Monopoly, in creating Lady Pandora Ravenel, a board game designer with ADHD and no plans to marry. Enter England’s most eligible bachelor, Gabriel, and let the witty dialogue commence. Pandora is kind of a love her or hate her character, but either way she’s memorably unusual. Despite my initially wary attitude, I really liked this one. If you’re in the mood for a cynical rake meets frowsy nerd Victorian-set romance, go for it.

“I told him I did not think the institution of marriage would suit me very well. I said I wished to look into other means of livelihood.” 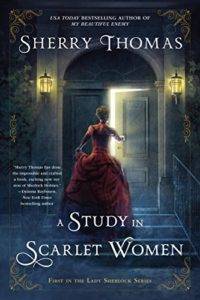 The hook in A Study in Scarlet Women will be obvious to any fans of Sir Arthur Conan Doyle, even without a glance at the series title. Thomas, best known for her Victorian-set romance novels, branches out into historical detective fiction in this first installment of The Lady Sherlock Series. When I first read this one, I felt a bit mixed about Charlotte Holmes, who refuses to marry and so does some things in the first chapter that defy not only deductive reasoning but plain old common sense. But she grew on me, as did her mysterious — and married — love interest, her supportive sister, and a gender bent Watson. I loved the way this book made me reflect on the Sherlock stories I’ve read, and I find myself very excited to return.