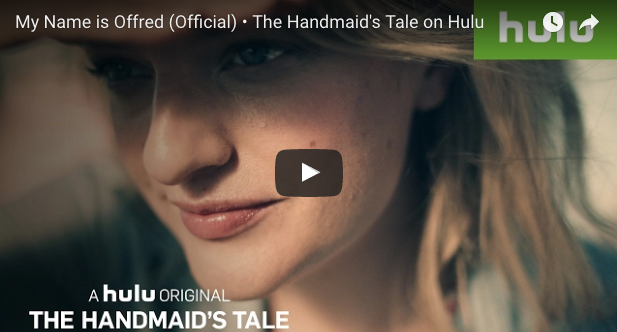 “My name is Offred and I intend to survive.”

Judging by the trailer, Hulu’s adaptation of Margaret Atwood’s The Handmaid’s Tale has brought the disturbing totalitarian world of Gilead to life.

It looks like Elisabeth Moss gives a stunning performance as Offred, who as member of the class of the only remaining fertile women in the dystopian society, is forced into sexual servitude in the home of a Commander. She navigates a world in which everyone is a potential spy and her movements are rigidly controlled in an attempt to break out and reunite with her husband and daughter.

There will be a Super Bowl feature for the trailer, which hopefully generate interest in not only the show (which looks amazing), but the classic book and other dystopian fiction that is looking more and more like our political reality every day. We’re already seeing a surge in popularity for these classics, but if you haven’t read it, try the audio version of The Handmaid’s Tale narrated by Claire Danes. If you’re looking for something else to read next, we have a helpful post of suggestions.