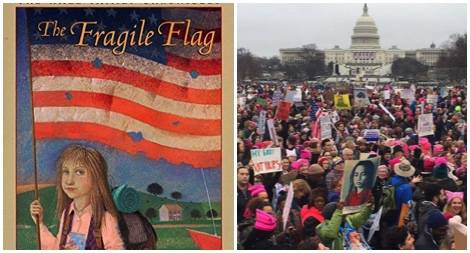 This is a guest post from Leila Sales. Leila is an editor at Penguin Young Readers Group and the author of a number of children’s and young adult novels, most recently Once Was a Time. She lives in Brooklyn, New York. Follow her at @LeilaSalesBooks, and learn more at www.leilasales.com. 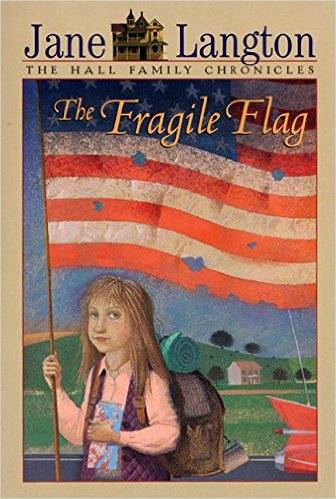 I don’t usually bother mentioning this, but when I was eleven years old, my favorite book was The Fragile Flag, by Jane Langton. I don’t say it because it doesn’t mean much to anyone: it’s a middle-grade novel that’s long out of print, and even back in the day, not many people were familiar with it.

I’m bringing it up now because of last weekend’s Women’s March. On Saturday, three dozen of my fellow children’s book publishing colleagues and I chartered a bus from our office in Soho down to D.C. We left before dawn and made the long journey together to our nation’s capital, so that we could get as close as possible to a President we do not agree with and ask him to value people and ideas that, at present, he does not. It’s a heroic quest. And the first time I ever heard of anyone embarking on such a quest was in The Fragile Flag.

This book was quite clearly published during the Cold War (1984, to be exact). The premise is that the President is about to launch a Peace Missile, which, in classic Orwellian doublespeak, is the ultimate weapon of mutually assured destruction: if the President presses the red button, the Peace Missile will blow up the entire world.

People all over the country protest, of course, but he pays them no mind. Children write him letters, which are thrown in the trash by the assistants to his assistants. But then along comes our heroine, spindly nine-year-old Georgie, who starts walking the 450 miles from her home in Concord, Massachusetts, down to the White House, where she intends to look the President in the eye and ask him to change his mind. And along the way, she is joined by 16,000 other children.

The moment when the children march down the Mall, approaching the White House after so many weeks on the road, Georgie in front, her raggedy American flag strapped to the handle of a mop, is a triumphant scene that stays forever in my mind. It convinced me, before it had even occurred to me to think otherwise, that I could make a difference. Not me alone, of course. The book is very clear that it’s not any one of the characters alone who changes the world—not Georgie, not her cousins Eleanor or Eddy. It is only when they’re taken as a whole that the kids matter.

Here’s the moment in the book:

The President sank his head into his hands. For the first time during his term in office, he was afraid.

If only the marching columns approaching the White House were a throng of grown men and women, a million strong, then he would know what to do. He would simply ignore them, and sooner or later they would go away.

And if it were an assaulting army of tanks and guns, that, too, would be easy to handle. The Air Force would destroy them with strafing planes and fighter bombers. The Army would bombard them with artillery. The Navy would send in the Marines.

But it wasn’t grown men and women. It wasn’t an army of guns and tanks. It was children, a thousand children. And they were the most dangerous army of all.

Can you imagine anything more empowering then reading that as a kid? “Children, a thousand children.”

In the book, of course, these children change the President’s mind. (It would not be my favorite book had they failed.) All his complicated political rationales cannot stand up to the “one simple tremendous truth” that the kids know: that the world should continue to live and flourish, that people should care about one another as equals, that children everywhere should be allowed to grow into their full selves, whoever those selves may be.

I re-read the book for the first time in many years on our bus ride down to D.C. And with my adult, editorial brain, I poked all sorts of holes in the narrative. The very idea is preposterous: children marching on their own, no adults allowed, not even teenagers (with the exception of Georgie’s 14-year-old cousin Eleanor, who is somehow supposed to be the responsible one). Why on Earth would their parents accept this? And of course this was before children had cell phones or debit cards. Logistically, how does any of this work? If we got this as a manuscript submission today, we’d likely say it required too much suspension of disbelief, and it would encourage kids to do something dangerous like start marching down Route 1 themselves, so unfortunately, this is going to be a pass for us, etc.

(Having an adult brain can really hold you back sometimes.)

Still, I found myself wishing that every kid in America could read The Fragile Flag, or something like it. I want every child to know that participatory democracy is not about just “getting over it” and accepting whatever government is handing to you. Democracy does not mean voting every four years (if you can) and otherwise holding your tongue and falling in line.

Rather, democracy means fighting for what you believe in, every day. It means constantly demanding that your representatives work to remain worthy of serving you. In a democracy, you will not always get your way, you will not always win. But that doesn’t mean you can ever stop applying whatever weight you have to try to push the world closer to where you believe it should be.

I first learned that truth from The Fragile Flag, and that is why it was my favorite book, despite the logic holes, despite the fact that it was never popular or award-winning and it quietly faded out of print. Editors and authors have to remind ourselves of this a lot: that even when a book seems “unimportant” in terms of sales numbers or critical reviews, it may be of the utmost importance to one reader out there. It may be the book that, years after it’s been removed from bookstore and library shelves, still shapes how someone views the world. That’s what The Fragile Flag did for me.

After many hours of standing in the crowd on the Mall on Saturday, I started wading through the human traffic to get back to our bus, to begin the six-hour drive home. My feet hurt and my back hurt; I was exhausted; I hadn’t sat down or eaten all day. I came upon a church with its doors wide open. They had bathrooms, tea, snacks, and chairs for the marchers. The church staff members were scurrying around, replenishing toilet paper and trays of Oreos. I met two sisters who had driven to the march from Dallas, wearing pink pussyhats sewn by their mother. And I was glad I was there. Because in an America of so much animosity and fear, that was goodness. It was right there in front of me. And I thought again of The Fragile Flag:

The country was worth preserving after all, dreamed Eleanor, and she was glad. It was something she had today begun to doubt.