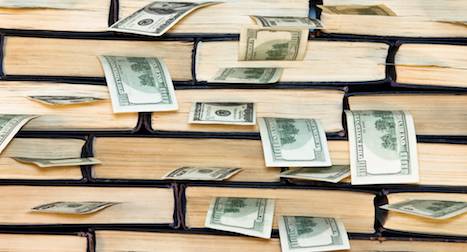 “I just love books; I don’t understand why you have to make it political.”

This refrain, which we heard again and again last week, sent me spiraling more than once, left me submerged in desperation over its utter absurdity. I saw it written just moments after I’d learned that the new occupant of the White House plans to defund the National Endowment for the Arts; the juxtaposition felt Orwellian.

You love books? Than you damn well better get prepared to be political.

Like book festivals? They won’t be nearly as exciting without NEA sponsorship to bring lauded artists to their stages for readings and discussions—or without its support of their poetry programs.

Love read-a-thons like the Big Read? That’s an NEA program, too.

None of this is to say that great literature, and great literary events, would not happen without the NEA; readers and writers plug on, even through intellectually precarious times, and undoubtedly some light would seep through the enforced dark. But the NEA was founded to help let the light in—with strategically granted funds given to writers in need, to ferry great literature onto the page; with funds given to sponsoring community events that foster a love of reading, writing, and the arts. And this is just the literature part of what the NEA does; it’s also tied up in the visual and performative arts. Its interests are broad, but they all come back to cultural enrichment.

Those of us who love to read MUST get political in environments such as these, where those who never learned to love reading, or who have no appreciation for the intellectual stimulation that comes from consuming pages, threaten to snuff out the light. We’re organizing for so much right now–from the safety of our neighbors to the educational system to the environment; the arts should be regarded as an essential cause for that organizing. They tie into everything.

When they come for the NEA, I can’t help but get cynical—particularly when their efforts are accompanied by dark challenges on so many other fronts. Those who would crush the NEA, I think, know how powerful it is.

Great literature makes us empathetic; sometimes it’s the first introduction we have to another perspective. It forces nuance, it inspires compassion, it motivates action. Those who don’t prioritize the arts—those who, worse, would shut them out—know that our artists are often the vehicles of our hope. To pull funding from them is to stifle this; it inhibits the cultural richness, and shutters places of dialogue and expression, that we need to thrive as a diverse community, now more than ever.

If you love books, then you likely know how the early chapters of dystopias read. It doesn’t sound like much, at first—just a little bit of pulling funds from an organization, even one that costs less annually than an (underattended) inauguration.

But imagine where you’d be without the artists that organization has aided and the spaces its opened. Wonder why they’d want that. Be wary.

And if you love books—really, truly love them—be prepared to get political on their behalf.

You can sign a petition against defunding the NEA HERE.

You can donate to the National Endowment for the Arts HERE.