Sorry, let me rephrase that.

Why aren’t you playing Avengers Academy???

If your answer is the arguably reasonable “I don’t know what that is,” allow me to explain! Avengers Academy is a free mobile game by TinyCo, available via iOS, Google Play, Kindle, and probably a few other platforms I don’t know about. It’s a time and resource management game that features dozens of Marvel characters, from A-listers to serious deep cuts, as students at a charmingly bizarre school that caters to their various explodey skill sets. There, the students flirt, fight, and dance (oh, so much dancing…) while Nick Fury tries to hone them into presentable superheroes…and keep them from uncovering the big secret he’s been hiding.

Now, I am the furthest possible thing from a gamer. I have no attention span for them; the minute it gets the slightest bit difficult I lose all patience and give up. But I have been glued to this game for five months with no sign of slowing down. 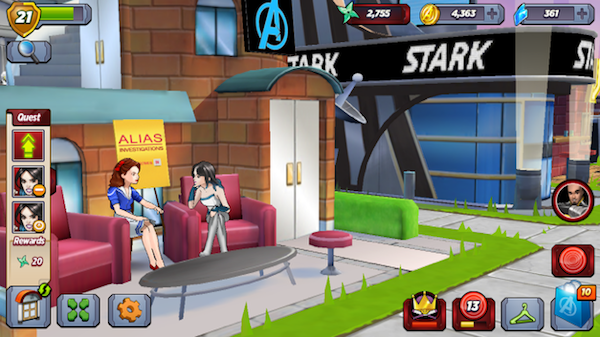 Where else can you see Peggy Carter and Jessica Jones hanging out?

Well, sort of glued to it. Like I said above, Avengers Academy is a time management game, so the gameplay consists of sending your characters on missions to collect coins and objects to unlock additional characters and buildings and to level up, but since the missions unfold in real time there’s a lot of downtime. A “day” of playing Avengers Academy is really a handful of ten minute sessions every four hours or so – perfect for those of us with desk jobs who like to reward ourselves with breaks!

The charm of Avengers Academy (or AvAc, as the cool kids call it) isn’t the mechanics or strategy, but the design and characterization. The developers have boiled each character down to their essentials so that they ring true no matter what canon you know them from: comics, movies, live action TV, cartoons. The students arrive dressed in perfectly in character street clothes that evoke their costumes, and each one is a lovingly goofy take on their persona, from the endlessly attention-seeking Iron Man and Wasp to a skulking Black Widow in a Russian spy outfit complete with fur hat to straight-laced, Charleston-dancing Captain America. 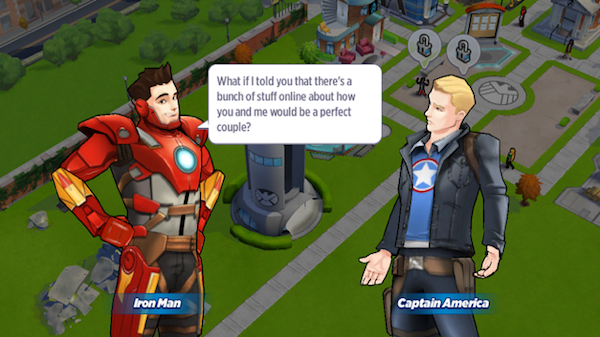 Yes, I said Charleston-dancing. A huge part of the glee the game provides is the ridiculous things you get to make the characters do, whether that’s putting Falcon in a penguin costume for the Halloween event or watching Loki challenge every new student to a furious dance contest. (I told you there was a lot of dancing!) 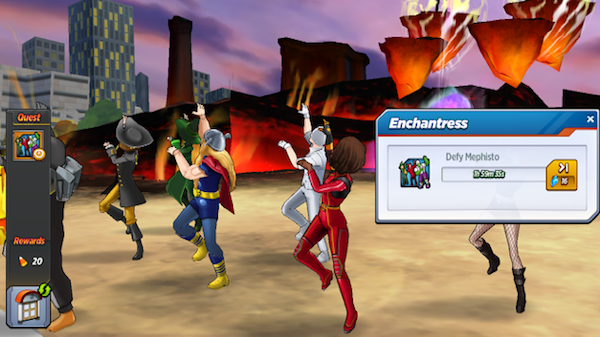 The kids do the Thriller dance to defeat the devil. I love this game so much.

The other compelling thing about the game is the mystery, which unfolds in little cut scenes as you complete quests. Why is everyone a teenager? What is Nick Fury hiding? Why is the school shrouded in a mysterious “time fog,” and why is it full of strange objects like Captain America’s shield, an Iron Man helmet Tony has designed but hasn’t actually built yet, and, uh, the Hulk? Though I don’t expect answers any time soon, I’m a total sucker for each additional mystery the game piles on. 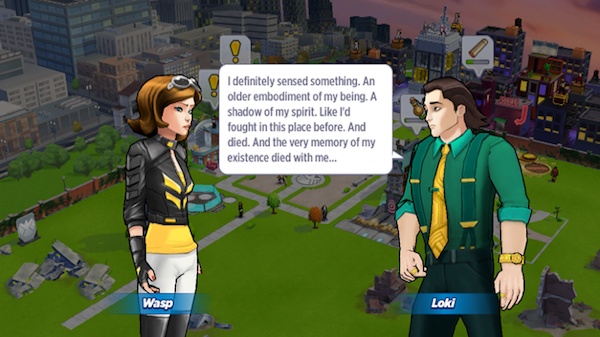 Avengers Academy is free, so if you have a mobile device, you have no excuse for not downloading it right now. (Um. It’s technically free. You can pay for premium characters and outfits and to expedite your progress. Let’s never discuss how much money I’ve dropped on this game.) And they’ve just launched a mini-event that will allow you to collect a bunch of characters you may have missed during 2016 events, so there’s never been a better time! Please go get it and then come back here and tell me all your thoughts and feelings about how great Wasp is. I’ll wait. I’ve got a bunch of eight hour missions left to complete anyway.