If I’m being completely honest, I believe that any day of the year is a good day to get excited about Christmas and its accoutrements. But out of respect for those people in my life who aren’t as enthusiastic about the holiday as I am, and with a sense of self-preservation in regards to those people’s violent tendencies at any premature Christmas discussion, I do my best to keep my explosions of Christmas cheer to the last quarter of the year. All that really means is that I still consume all Christmas-related media year-round, but from October to December I really let my inner Buddy the Elf loose, and fuel him with plenty of maple syrup and peppermint bark and arbitrary (but vital!) traditions. 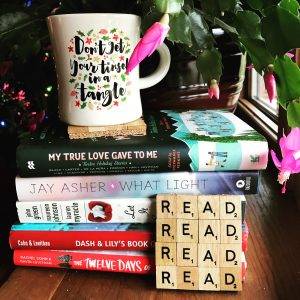 Naturally, one of those traditions includes re-reading all of my favorite YA Christmas-y books. There are some solid classics, like Let It Snow by John Green, Maureen Johnson, and Lauren Myracle and Dash & Lily’s Book of Dares by David Levithan and Rachel Cohn. Both have romance, humorous hijinks, and a degree of self-awareness for how ridiculous the holiday is along with a dose of Christmas magic. I was so pleased to add My True Love Gave to Me: Twelve Holiday Romances edited by Stephanie Perkins to my reading list a couple of years ago for some quick shots of romantic holiday cheer, and this year I have two new reads to look forward to: the sequel The Twelve Days of Dash & Lily, and What Light by Jay Asher.

Aside from this core list, Christmas/holiday centered YA books aren’t too plentiful. Top Ten Clues You’re Clueless by Liz Czukas is set at a grocery store on Christmas Eve, so it has some fun holiday flavor, but it’s more of a “The Breakfast Club” during the holidays than “A Christmas Story.” You can find a smattering of less-than-great, straight-to-paperback teen holiday romances that are about a decade old, but those are the Hallmark Channel version of Christmas YA books—fun for a quick read during December, but not consume-every-year-classics.

So, the pickings are slim. It usually doesn’t bother me tooooo much. Except, this year I noticed something that does bother me: The authors of my favorites are predominantly white. In fact, the authors of most of the available YA holiday reads are white. The only exception I could find was in the anthology My True Love Gave to Me, where two contributors are authors of color.

I don’t have any especially insightful answers other than the obvious issues of diversity in publishing that are already well-known and documented, but I really, really hope that this changes because that lack of representation inaccurately distorts our reality. I don’t think it’s much of a stretch to say that Christmas is one of the most inclusive holidays on the calendar. Sure, it started out as a Christian celebration…but according to a Pew Research Center study, only 46% of Christians in the U.S. are white. Beyond that, the Christmas celebration has transcended religious beliefs to become a cultural holiday, at least in North America. The cynics among us may call it a consumer holiday and there is no doubting that the holiday has grown into a trillion dollar industry that is essential to the global economy, so the pressure on the materialistic aspects of the season is totally on, and it’s something we all feel. But I’ve never believed that Christmas is just about the gifts and inclusivity has become one of the most important tenets of the holiday.

When I was writing my own Christmas-infused YA novel about a teen girl who is seriously skeptical about the whole point of Christmas, I had to think long and hard about the holiday. The why’s and how’s of the celebrations, the expectations we hold, the traditions we adhere to, and the lengths we go to celebrate one day on the calendar. At times, it all seems pretty ludicrous—and exploring those crazy moments makes for some pretty good comedy, rich storytelling opportunities, and yes, social commentary. But what I ultimately understood during the research, writing, and revising process is that the traditions we hold are all incredibly diverse and endlessly fascinating and very much worth talking about. This extends beyond Christianity and beyond Christmas, too. I want to read about how people other than myself (white and cisgendered and Christian-raised) celebrate the winter holidays, Christmas and otherwise, and I want to read about those celebrations in well-crafted YA novels by own voices. To be fair, My True Love Gave to Me does take a slightly wider view, but we need more than just one anthology.

As a holiday glutton, it’s true that I’ll read anything with a Christmas whiff to it at least once. But it’s my Christmas wish that YA publishing will seek out more diverse stories about the holidays for all to enjoy and learn from, books that we’ll want to return to year after year. I promise you that there are readers for those books, and not just in December.

Sign up for What's Up In YA? to receive all things young adult literature.
Thank you for signing up! Keep an eye on your inbox.
By signing up you agree to our Terms of Service
#Young Adult Literature#Christmas#holiday#we need diverse books#young adult