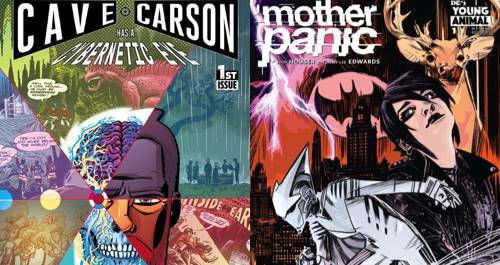 With DC’s launch of the new Young Animal line, curated by Gerard Way of My Chemical Romance fame, Thomas Maluck and I have been reading of the four initial series as they have come out, and sharing our thoughts with you. Today we bring you Part Two, in which we discuss Cave Carson Has a Cybernetic Eye and Mother Panic, as well as our thoughts about the line as a whole. (In Part One, we discussed Doom Patrol and Shade the Changing Girl.) 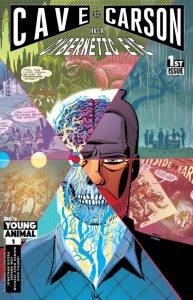 TM: This feels like The Venture Bros. without the pop culture humor. Former science adventurer Cave Carson, now a widower, maintains a tenuous connection with his daughter Chloe and deals with hallucinations from his mysterious cybernetic eye. Shadows and routines dress up themes of grief, family, and former glory.

Those cameos, though! Doc Magnus and the Metal Men! Nostalgia for an old Superman adventure! The Life Aquatic-esque family films! Far from shoehorning for longtime DC readers, they felt like facets of a larger, stranger history for the Carsons. Then there are Tom Scioli’s fantastically surreal short stories in the back featuring Batgirl and the Wonder Twins. I have no clue as to Cave Carson’s previous existence within the DC universe, and right now I don’t care in the midst of this magical cocktail.

Are you as much of a sucker for this debut as I am, Charles? 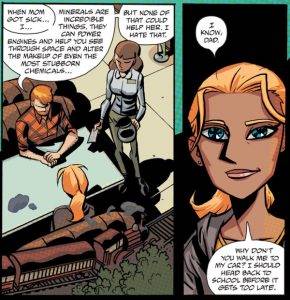 CPH: I went into CCHACE having absolutely no idea who Cave Carson was, but I’m really enjoying this book. It’s had some genuinely gripping family drama between Cave and his daughter Chloe, who are both mourning the loss of his wife/her mother. While I felt totally lost in Doom Patrol, I don’t have that feeling at all with CCHACE, which I think has done a fantastic job of balancing references to decades old comics and making it accessible to new readers (probably necessary, given Cave Carson isn’t really a household name). This books feels like it has a deep history behind it, but not one I need to know to get what’s happening now.

I’m also really digging the art by Michael Avon Oeming and Nick Filardi. Oeming has a great cartoony style that almost reminds me of Bruce Timm, and Filardi is doing some incredible work with the colors. Not just the palate—which is a perfect fit for Oeming’s art—but also the expert use of screentone. This is a beautiful book to look at. 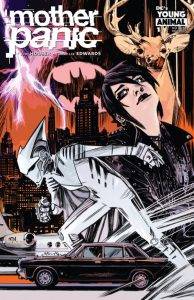 TM:I hope calling this the most “standard” of the Young Animal releases isn’t held against the title as a negative label. However, its rich girl with a sour attitude turned vigilante in Gotham City makes for a gritty Batman side story. So far! Violet Page’s tragic parental situation -passed father, mother in throes of dementia or something like it – has depths to plumb, and the art-obsessed villain should provide plenty of fodder for Page (Mother Panic? Is that her masked name?) to inflict inspired violence. I wonder how many cutaways to animal attacks Tommy Lee Edwards will draw over the course of this series. 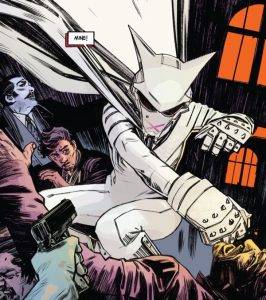 “Two flavors of costumes in this city, psychos who hurt and psychos who help,” one character claims. Which do you think Jody Houser is writing? I’ve enjoyed her work for Valiant, particularly Faith and the Shadowman tie-in to 4001 A.D.

Also, as with CCHACE, the backup story adds great value, making me want to follow the serial issue to issue. What did you think?

CPH: I also enjoyed Mother Panic, though when I was reading it I realized one of the problems I’ve had with the Young Animal books so far: they have all used very complicated narrative structures that can be difficult for new readers. Mother Panic, for instance, switched back and forth between the present and flashbacks to the past, which I’m normally fine with, but I didn’t think quite worked here. The big culprit was the art style and colors stayed constant, so there wasn’t an easy way to distinguish the now from the then, but I think switching between two present stories and flashbacks may have been just too much for 22 pages. 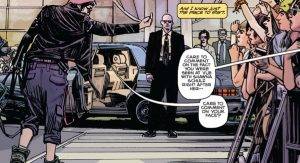 BUT! I still really enjoyed this book. Mother Panic (and I do think that’s her name, going by the Who’s Who-style character guide at the end of the issue) is different enough from Batman for there to be room for her in Gotham City, and there’s huge potential for stories that explore how it’s much easier to be a billionaire playboy than a billionaire heiress. I’m really looking forward to reading more of this book.

TM: Doom Patrol and Shade The Changing Girl’s new issues since our last Young Animal article have held up.

CPH: Yeah, my original assessments also still stand. Doom Patrol just keeps getting more incomprehensible—I guess Casey’s ambulance is also a sentient street or something? It sort of feels like Way is modeling his run on the tone of what came before—presumably Morrison—but, again, this is my first dance with Doom Patrol, so I can’t say for sure.

I’m still really enjoying Shade the Changing Girl, and I think that’s the one Young Animal book really helped by the complicated narrative structure. The book is about madness, how we deal with it, and how it enlightens us, so it doesn’t actually hurt the book if it doesn’t always make sense.

If I were to rank the Young Animal books, I’d go 1) Shade the Changing Girl, 2) Cave Carson Has a Cybernetic Eye, 3) Mother Panic, and 4) Doom Patrol. I suspect that ranking is a lot different than what many others would say, though. I think Doom Patrol is just not for me.

TM: My list has a couple of swaps compared to yours, but we mostly agree. 1) Cave Carson Has a Cybernetic Eye, 2) Shade the Changing Girl, 3) Doom Patrol, and 4) Mother Panic would be my order for the moment. However, with only one issue out as of this writing, Mother Panic could scoop the entire line.

CPH: Agree. We don’t have a lot to go on with Mother Panic yet, and it could definitely end up being the best of this initial batch.