I’ve been a fan of Gilmore Girls since the show began airing in October of 2000. Approximately six years ago, I began a blog where I documented my personal challenge to read all of the books referenced in all seven seasons of the series (full disclosure: I’m still only on season two). I flew to Austin, Texas to attend the Gilmore Girls cast reunion at the ATX Festival. I began a podcast that is simply used as a vehicle to gush about how much my cohost Rob and I love the show. In October, I spent a weekend in Washington Depot, Connecticut (it helps that I live in Connecticut) with my friends as the town recreated a Stars Hollow experience.

And did I mention that I named my daughter Lorelai?

So it probably comes as no shock that the minute I heard about Netflix doing a revival consisting of four 90-minute “movies”, I immediately went out and purchased all of the Pop-Tarts, coffee, Mallomars, and pizza that a girl can physically eat without starting to resemble a Mallomar herself (but oh, that marshmallow-y filling)!

Given the fact that I write for Book Riot, I knew that one of my self-appointed goals as I sat down to watch Gilmore Girls: A Year in the Life (besides trying not to cry too loudly at the scenes referencing Richard Gilmore’s death) would be to compile all of the literary references.

So go visit Andrew at Stars Hollow Books and get to reading! 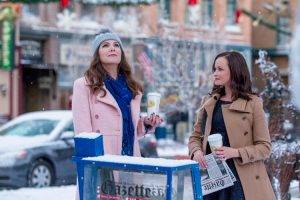 Lorelai: I thought there’d be something fun in there. You know, like a treasure map. Or the prequel to Huckleberry Finn where Huck is a Klan leader and terrified of water

Lorelai: Yeah, but for now she’s Jack Kerouac. She’s On the Road-ing it. Pass the Peyote!

[Fun fact: On the Road is actually the very first literary reference made in the original series.]

Emily explains that she has read The Life-Changing Magic of Tidying Up and is going through all of her possessions.

Emily: They don’t bring me joy. 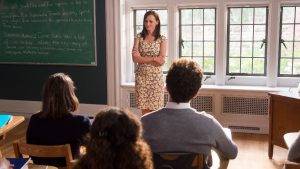 Naomi Shropshire: Come April, it’s like my face is one of Shakespeare’s first folios.

Rory: And she kept coming back to it. Comparing the archetypes to characters in some play by Aeschylus. Oh, and you haven’t lived until you’ve heard a tipsy Brit try to pronounce Aeschylus.

Logan: Hey, Aeschylus is hard even when you’re not tipsy.

Death of a Salesman by Arthur Miller

Rory: And trying to convince her that Willy Loman is not one of the characters in Aeschylus. That was a hoot.

Paris: I cannot remember the books I’ve read any more than the meals I have eaten. Even so, they have made me.

Written on the board in the literature class at Chilton:  Motifs of Jane Eyre

The Art of War by Sun Tzu

Paris: It’s killed or be killed. I’m not talking The Art of War. Oh no, that’s a tiptoe through the tulips compared with what you’re going to find beyond these walls.

Consider the Lobster and Other Essays by David Foster Wallace

Denise: Consider the Lobster? It’s a serious subject but funny and truthful.

Jim: Yeah, that’s the camp I’d put you in. I mean, no one’s David Foster Wallace. But there’s an erudition to your stuff and some whimsy which I like.

Robert Castellanos: And Miss Shropshire would like you to sign a letter waiving all rights to the Whale and Mouse idea.

Lorelai: Well, mom at 16 for starters. Hot in Outlander. But elsewhere… 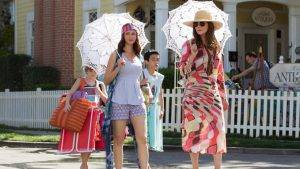 The book Lorelai is reading poolside

The book Rory is reading poolside

April: I took some great linguistic courses too. I mean, it’s MIT. Noam Chomsky walks the halls. I met him. Chatted with him. Laughed with him. He’s my idol.

Lorelai: Well, to Noam is to love him.

Taylor:  That’s Nat sitting at the end of the first row. He’ll be directing as well. Let’s give him a nice hand.

Rory: Whoa. Give him a crystal sword… he’s a white walker.

[later scene in the same episode]

Taylor: The opening scene is an excerpt from a play I wrote in college that happened to be blessed by my mentor, the great Edward Albee. You may know him as the author of a little something called Who’s Afraid of Virginia Woolf.

Rory: So you got Dave Eggers shaking in his boots?

Jess: If Dave Eggers even knows we exist, I’d be happy.

Rory: I don’t want to say you’ve been filing that piece of paper for a long time, but when you started, Nora Ephron felt good about her neck.

Ode: Intimations of Immortality from Recollections of Early Childhood by William Wordsworth*

On Richard Gilmore’s gravestone:  “That there hath pass’d away a glory from the earth.”

*This quote was incorrectly attributed throughout the episodes to Longfellow on the gravestone and as it’s being discussed.  The correct author is Wordsworth. 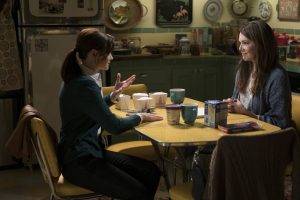 Hiker: I almost did Eat, Pray, Love but my miles were blacked out. So here I am!

Life & Death Brigade member: By the pricking of my thumb, something this way comes.

Call of the Wild by Jack London

Lorelai taping items to her pack: I have your call of the wild right here, pal

The Portrait of Dorian Gray by Oscar Wilde

Lorelai: You don’t move or change ever.  There’s a picture of you in the attic that Dorian Gray is consulting copyright lawyers about.

Sookie: Yeah, he’s been reading Little House in the Big Woods to Martha and he got to the part where Ma goes outside to check on…

Lorelai: Oh, the horses! Because she thought the cow….

Sookie: had gotten out of the…

Lorelai: barn. But it’s not and she smacks him on the nose and…

My Struggle by Karl Ove Knausgaard

The book Jess is reading as he waits in Luke and Lorelai’s living room.