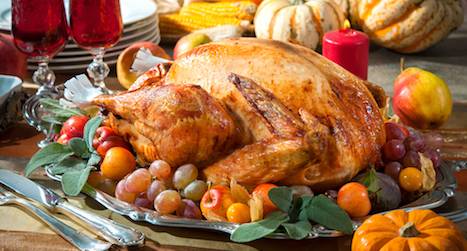 Some of the best parts of books are the feasts and food that are described. I’ve often thought that about the Famous Five novels by Enid Blyton, and the Harry Potter books. Even Orwell’s Down and Out in Paris and London gave me a hankering for bread and butter. No feast really compares, though, to Thanksgiving.

Last week, I celebrated my first American Thanksgiving. What I knew about the holiday was gleaned from popular culture: TV, movies, and most importantly, The Baby-Sitters Club books. I’ve written about the impact of that series on my American education elsewhere, and this year I was curious to see how my real-life Thanksgiving compared with the fictional BSC ones.

The book culminates in the Pike family’s Thanksgiving celebration, where they all dress up, the silverware is brought out, and they watch the Macy’s parade on TV. The menu consists of stuffed mushrooms, cheese logs, vegetable dip, green leaf salad with cherry tomatoes, roast turkey, wild rice and chestnut stuffing, mashed potatoes, buttered green peas, pearled onions in cream sauce, cranberry sauce, and the dessert is pumpkin pie with vanilla ice cream.

In Claudia and the First Thanksgiving, Claudia and her short-takes class is working with some of the kids at Stoneybrook Elementary to put on a play that depicts what the first thanksgiving would have been like. Some of the parents protest, arguing that the play’s portrayal of women, gender roles, and the European settlers were un-American. From page 90:

“What kind of nonsense is this?” said someone else. “The Pilgrims were heroes. They came to a savage, uncivilized country and made something of it.”

“Oh, yeah?” Abby shouted. “Tell that to the Native Americans! And then ask the Pilgrims what they believed about the Jews. Europe wasn’t civilized, it was bigoted and prejudiced. Just because you believe a bunch of lies and propaganda doesn’t mean we have to!”

Some of the parents want the play to be cancelled, and in the end they put on a sanitised version of the play and write ‘CENSORED’ across the playbill and posters. Students from the middle school put on the original play with protesting parents in the audience. This book is really about as political as the BSC got, and it taught me a great deal about Thanksgiving. If not the details of Thanksgiving, I at least learnt names like the Mayflower, Squanto, and Miles Standish.

The subplot of the book is the Thanksgiving feast for all the members of the BSC and their families, a dinner with 36 people in attendance. There are Thanksgiving cookies, two huge turkeys, pecan, pumpkin, and apple-cranberry pies, cranberry sauce, mashed potatoes, sweet potato casserole with little marshmallows on top, string beans, carrots, mashed potatoes, and rolls.

So these were my expectations of a proper American Thanksgiving: lots of family, epic feasts, and perhaps a history lesson about the Mayflower and the Pilgrims. I expected turkey, mashed potatoes, and pumpkin pie, and for it all to be spectacularly delicious. And how did the Sherman family Thanksgiving measure up to my expectations and compare with the Pike family or BSC feast? Pretty close!

There were no history lessons, and I don’t think the world ‘Pilgrim’ was said once. We didn’t watch the Macy’s parade. There were no peas, or pearled onions, or stuffed mushrooms. There were no marshmallows on the sweet potato casserole. The stuffing wasn’t wild rice and chestnut (it was made with challah bread, celery, onion and seasoning).

But we did have a dinner with 31 people. There were two turkeys, cooked to perfection. And 22 pounds of tri-tip. There was mashed potato casserole and sweet potato casserole and carrots and green salad. There were four apple pies, one pumpkin pie, and ice cream sandwiches. There was enough food for us to still be eating Thanksgiving leftovers five days later. I did learn, however, that I don’t like pumpkin pie. To be perfectly honest, if Thanksgiving was just the tri-tip and apple pie, I’d be content.

The fact that real life is often not how it is depicted in books was a harsh truth I learnt some time ago. But when it comes to Thanksgiving, at least with my new family, it comes pretty close. The warmth, family and food that made me wish I was at those Thanksgiving feasts with the BSC when I read the books all those years ago was there in spades at my first American Thanksgiving. I am finally in Stoneybrook.