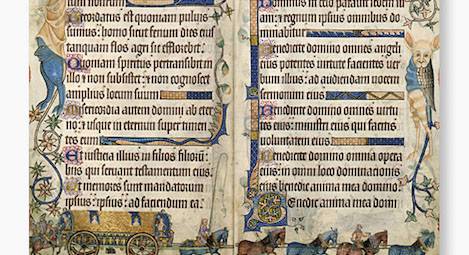 The Luttrell Psalter is one of the most famous manuscripts from medieval England because of the images that decorate the margins of its pages. Some of these images have been interpreted as the most accurate portrayals of medieval rural life while others seem to make no sense at all.

However, if we dig deeper into the layout of the images on the page, the Luttrell Psalter reveals itself to be a magnificent example of political satire and wordplay of the highest level.

Here are ten things you need to know about the Luttrell Psalter and its images.

1) The Luttrell Psalter gets its name from the man who commissioned it, Sir Geoffrey Luttrell (1276-1345).

2) The Luttrell Psalter is 14 ½ inches tall and 10 ½ inches wide. It contains 309 vellum leaves of the highest quality with flyleaves of paper. The text is in Latin.

3) The British Library dates the Luttrell Psalter to sometime between 1325 and 1335, although this date is not certain.

4) The Luttrell Psalter was created by one scribe and at least five artists, all of them anonymous. Because the identities of the artists are unknown, they are referred to in reference to their style, e.g., the Decorator, the Illustrator, and the Luttrell Master.

Sir Geoffrey Luttrell with his wife Agnes Sutton, and Beatrice Scrope, his daughter-in-law.

5) The Luttrell Master is the artist responsible for the Psalter’s portrait of Sir Geoffrey. Sir Geoffrey is portrayed dressed in full armor and mounted on his warhorse. With him in this picture are his wife Agnes Sutton and his daughter-in-law Beatrice Scrope. The portrait presents Sir Geoffrey in the prime of his youth while Agnes is depicted as his supportive wife, and Beatrice as the future of the Luttrell lineage.

6) The Luttrell Psalter has been considered the one manuscript that accurately portrays life in medieval rural England. However, the Psalter was commissioned by and created for Sir Geoffrey. Therefore it is more likely that the images of farmers at work are idealized portrayals meant to please the lord of the manor, rather than demonstrate everyday life.

Sheep and shepherds in the Luttrell Psalter.

7) The Luttrell Psalter is also famous for its surreal images. To be able to interpret these images you need to be aware of the symbolism of visual political satire in the Middle Ages.

Monkey driving a cart in the Luttrell Psalter.

8) The surreal images are closely linked to the text they are placed next to. And even though the text is in Latin, the image itself can be a visual representation of a play on words in either French or English. Consequently, to fully understand why an image appears where it does in the Psalter, you need to know these three languages very well.

9) The Luttrell Psalter was sold by the Luttrell family soon after Sir Geoffrey’s death. Throughout the centuries it has had several owners. In spite of this, the Psalter is still intact.

If you would like to flip through the pages of the Luttrell Psalter, please click here. The Psalter is available in its entirety in color images including commentary to each spread.

If you would like to read more about the Luttrell Psalter, Michael Camille’s Mirror in Parchment is considered the definitive work on the subject.