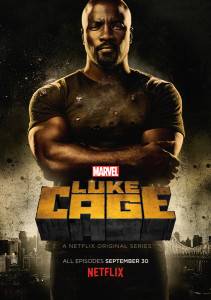 There is no better time than now for a forward-thinking, courageous portrayal of a bulletproof black superhero on television. Real talk, I’ve been over the moon hype for the Luke Cage series since out first glimpse of the character in Marvel’s Jessica Jones. When I saw him in the trailer sitting in a barber’s chair reading a copy of Walter Mosley’s Little Green I may have shed a tear. How black is that? That’s some next level black right there.

Cheo Hodari Coker and company have promised us nothing less than deep space levels of blackness with Marvel’s Luke Cage, though. Think about it: The crucial nods to legendary hip-hop cuts and cultural icons in promos, trailers, and advertising. The willingness to tackle public conversations that have become crucial to the lives of black people, comic fans and non-fans alike. The show’s very open nod to both black literary, cinematic, and cultural tradition, complete with barbershops and kingpins in three-piece sharkskin suits. This show feels like New Jack City meets Heroes, all wrapped up in black packaging, tied with a black bow, and hand delivered by a very different Luke Cage than the one created by two white men in the early 1970’s.

To really get my excitement for this show, you have to understand where I’m coming from as a fan. The Marvel Cinematic Universe doesn’t really want for black male characters, but if you review their catalog, you’ll see that most of the black male superheroes in their film and television properties are sidekicks. At best. The tally is even more woeful for black women. Black Panther is cool, but he’s always had the cold distance of monarchy about him. Luke Cage in his best depictions, though, has helped me make sense of the world. He’s a reflection of many of the hard working blue collar dudes in my life, dudes that were more readily identifiable when I thought of myself and my own potential as a teenager. My father and my uncles were Luke, only the bullets flying around in my neighborhood wouldn’t bounce off their chests. They had history with police and the courts, and when they emerged from those systems they came out different men, with different mindsets. My own personal moral code–hustle hard, protect everything that you love–is influenced in large part by reading Luke’s stories and taking notes on how he handled his business. Detractors of “identity politics” in comics miss one crucial fact in their bellyaching: for lots of us, comics are invaluable tools in helping us form our identities. Superheroes aren’t just splotches of color on a page. If representative heroes like Luke Cage didn’t exist for me to use as a lens to view my complicated identity and surroundings, my self-image might be drastically different. 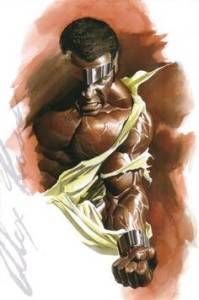 One of the things that I’m most excited about as this series looms is the ostensible cultural weight of Luke’s story in this American moment. The image of Luke stepping out of that tank post-experiment, wearing the armbands, newly hardened skin steaming? That kind of wink and nod to a character’s classic depiction comes standard in Marvel’s cinematic offerings, but it is in Luke Cage that I’m thinking we’ll get a smartly reimagined hero for an updated world. We’re going to see more than a simple transition of Luke’s character out of the chrome tiara phase of the 70’s and into the gritty hoodie hip-hop phase. We’re going to see Luke navigating a world with complex modern problems like gentrification and crime, and he’ll be moving as a black man who happens to function as a superhero–and not one that operates on a macro, world-level scale. Luke, like so many change agents, is working on the ground in his neighborhood, in a space that he knows and can control to some degree. That has always been the strength of the character, and that strength is, again, representative of people I’ve known in my life, people who can and do fight every single day to make their neighborhoods and cities better for everyone.

I find myself wondering whether the show, and its characters, will achieve some sort of critical success. I’m guessing that it will be very popular with the segment of its audience that appreciates great television. Television is no longer the idiot box of old, and even in the trailers I can see that this is the tube’s unique brand of serial storytelling at its finest. But I’m wondering about its success with comics fans, fans whose relationship to–and enjoyment of–a character is tied to their personal experiences with them. Will comic fans be able to separate their ideas of how Luke and his story should be depicted from how Luke is actually depicted in the show? For fans who are not black, will the show’s addressing of important political matters create a disconnect? Will black fans of Luke Cage spend lots of their critical space discussing how the show doesn’t correctly depict their idea of blackness? I fear that, as is typical with television, the stories and experiences of black women, of black queer people will be omitted. I hope that my fears will not be realized.

For me, critical reception doesn’t matter. I’ve consumed every bit of promotional media for Marvel’s Luke Cage, and I’ve already made up my mind that it’s going to be beyond fantastic. And timely to boot. I’m finding it more and more difficult to separate my personal politics from the media that I consume, and with Luke Cage on the horizon, I’m ready to see experiences like mine put front and center in the Marvel Cinematic Universe.