A recent New York Times profile of Ursula Le Guin suggests that nearly as good as getting the October phone call from Sweden is “enshrinement in the Library of America, the closest thing to immortality between hardcovers.”

While the October call is still a ways off, the Library of America distinction is being conferred on Le Guin, who will sit alongside writers like Melville, Twain, Hawthorne, and Welty.

The library intended to begin publishing some of Le Guin’s “classic” speculative work, according to the NYT, but what’s coming out next month is the 700-page tome The Complete Orsinia, which includes Le Guin’s lesser-known 1979 novel Malafrena.

Le Guin’s ouevre is sprawling and it can be difficult to know where to step in. Although not if you’re six months old: In that case, you really should begin with Cat Dreams. 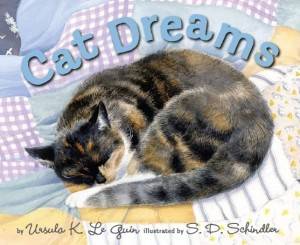 No one is too young for Le Guin, and every budding reader deserves richly solid, well-crafted sentences like the ones Le Guin offers.

For babies and toddlers: Cat Dreams 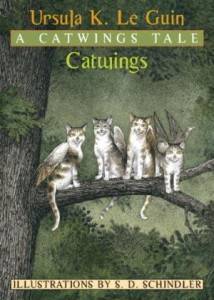 There are many contemporary books for brand-new readers that are fast, flashy, and extremely loud. There are characters are mean to one another for laughs.

These books are not those: Le Guin’s four Catwings books make a gentle, warm space to stretch one’s literary wings, with an eye to injustice, written in her sonorous sentences. The four books focus on four cats who are born with wings. It opens:

“Mrs. Jane Tabby could not explain why all four of her children had wings.”

The books are a charm to read aloud, and you can listen to an excerpt read by the author. Five-year-old reviewer Rafael, who devoured the series, says: “I love the books. I don’t really like how they get lost from home. But then they find each other again.”

For the newly literate: 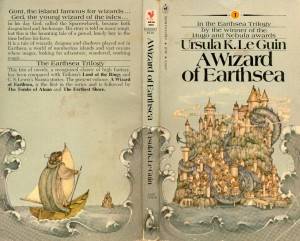 A pre-teen is at a fantastic age for the Wizard of Earthsea books.

I recently re-read the lot of them, aloud, trading chapters, with my eldest son. To be honest, I wanted to read most of it, as they are great sentences to hold in your mouth. Some of it is a bit grim for young readers, but we took great joy in spending the time with each of Le Guin’s scenes, and in submerging ourselves for weeks on end in the universe of Ged, Ogion, Vetch, Tenar, Lebannen, and Kalessin. Every page offers a solid new reality, gut-dropping and exciting twists, and new ways of seeing human behavior. Always, Le Guin’s eye on how humans can be better.

Why age 9-14? Read them young and you can re-read them often.

For pre- or young teens:

For this age, the Annals of the Western Shore trilogy.

It takes a moment to sink yourself into the world of Orrec and Gry, “a blind boy and a grim girl, sixteen years old, stuck in the superstition and squalor of the desolate hill farms and that we so grandly called our domain,” but one is quickly absorbed. There is a good deal of magic, but there is also how to think about one’s parents, and cruelty, and lineage.

“To see that your life is a story while you’re in the middle of living it may be a help to living it well.” 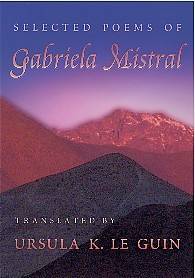 There is nothing like poetry for getting through the occasionally dark nights of young adulthood. Le Guin wrote — and still writes — some of her own poetry, but she also translates, including work by the first (and only) Latin American woman to win the aforementioned Nobel Prize for literature.

These translations are among Le Guin’s many gifts.

Life of my life, what you loved I sing.
If you’re near, if you’re listening,
think of me now in the evening:
shadow in shadows, hear me sing.

Life of my life, I can’t be still.
What is a story we never tell?
How can you find me unless I call?

For the thick of your early twenties: Selected Poems of Gabriela Mistral 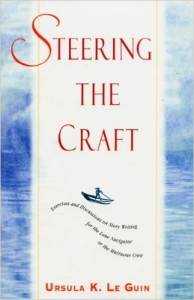 Le Guin has wonderful observations about the nature of fiction, particularly fantasy and science fiction, but all of storycraft. These have been compiled into a number of collections, some more directed at helping an author, such as Steering the Craft, and others as observations on the nature of the story and its reception.

For the emerging writer or writologist:

>The Language of the Night: Essays on Fantasy and Science Fiction
>Dancing at the Edge of the World
>Cheek by Jowl
>Steering the Craft: Exercises and Discussions on Story Writing for the Lone Mariner and the Mutinous Crew 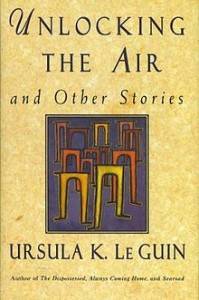 A finalist for the 1997 Pulitzer Prize for fiction, Unlocking the Air and Other Stories is collection of beautifully spun short stories from the fabulist to the firmly realist, with a particular focus on disability and difference.

As Le Guin herself has noted, it’s a hard collection to describe, as “Buz [Wyeth] remarked that he was having some problem describing the book because there was such a variety of stories in it. I said yes, indeed, there were stories of eighteen different genres, and I wrote him this TOC to prove it. He thought it was funny, but he wouldn’t let me put it in the book.”

For the emerging non-writer: Unlocking the Air and Other Stories 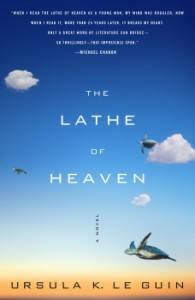 The Lathe of Heaven

Novelist Michael Chabon has written about reading The Lathe of Heaven at different ages:

“When I read The Lathe of Heaven as a young man, my mind was boggled. When I read it, more than 25 years later, it breaks my heart. Only a great work of literature can bridge — so thrillingly — that impossible span.”

You can read an excerpt at Le Guin’s website.

For the emerged: The Lathe of Heaven. 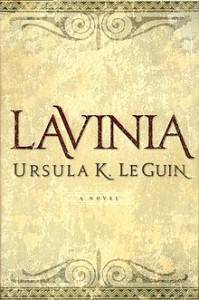 In Lavinia, a time-traveling Virgil meets the young wife he’d given just a few lines in The Aeneid.

From an interview with Kirkus:

“The first time I really read the Aeneid was in my seventies, when I got enough Latin into my head at last to read it in Latin. Vergil is truly untranslatable; his poetry is the music of his language, and it gets lost in any other. Reading it at last, hearing that incredible voice, was a tremendous joy. And Lavinia’s voice and her story came to me out of that joy. A gift from a great giver.”

Particularly for readers in their seventies: Lavinia 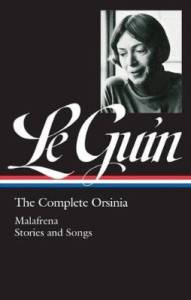 Readers in their eighties have made it to LeGuin’s decade; this is what she’s chosen for her first Library of America publication: The Complete Orsinia.

Malafrena (written in the 1950s, published in 1979) is set in the 1820s Habsburg Empire, riven by revolution and nationalism.

The bulk of the stories were originally published in Orsinian Tales (1976), but additional work brings the history of Orsinia up to 1989. According to the Library, included is “‘Folksong from the Montayna Province,’ Le Guin’s first published work, and two never before published songs in the Orisinian language.”

For the discerning octogenarian: The Complete Orsinia.