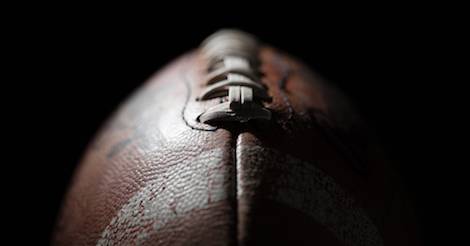 The world is focused on the Olympic Games these days, and what has filtered down to us non-sporty peeps can be summed up nicely: Americans aghast at the steady stream of sexism from the NBC commentators, which would be funny if, say, it were funny, and the seemingly endless speculation about the octopus hickies on the backs of the swim team.

Meanwhile, the NFL has just begun their pre-season games.

I managed to avoid everything to do with sportsing generally, and football particularly, until 2013, when the hometown team, the Seahawks, won the Super Bowl.

On the day of the big game, we had a matinee concert scheduled in the little venue I manage. This gig had been on the calendar ages before the football season even began. Ten minutes before the recital, there was not a soul in the audience. Thankfully, at the last minute, a couple dozen brave souls show up.

After the show—solo cello, delightful and delightfully brief—my son and I bicycled over to a friend’s house for my first ever Super Bowl party. It was a dark, overcast day, and the streets were utterly abandoned. Riding along, I remembered that eerie scene in On the Beach where whatshisname returns to his hometown after the nuclear holocaust, and everything is still and silent. Every few minutes we would hear shouts and cheers or loud moans erupting from nearby houses. In unison.

It was so unsettling. The thought crossed my mind that perhaps sports, not religion, might be the opiate of the masses.

But the party house was warm and inviting. There were a couple professors at this shindig, their spouses, one infant, and the stars of the party, Greta and Benjamin, both five years old. I don’t know if he’d seen his father in action, or if little Benjamin just by osmosis knows the moves, but after I asked about the score a second or third time, he stood next to the TV screen, pointing and explaining. Patiently.

Benjamin: “See these numbers here? If you want to know who is winning, you look at the little picture here to tell you which team is which. And then you look at their score, the number here, to see which number is bigger. The bigger number is the winning team’s score.”

“Ah. Thank you. And how do we know how much time is left? Is it intermission yet?”

Benjamin: “In football, we call it halftime, Nicole.”

Greta, gravely: “This is not a concert.”

Can you think of a more delightful introduction to football? I can’t.

In the last three years, since that fateful Super Bowl, I’ve come to realize a few things about the game, the main thing being: it’s complicated.

Football, bookishly, (and perhaps, actually), is either about glory and inspiration or money, misogyny, privilege, and racism.

I asked around for some recommendations. Not to be a Debbie Downer or anything, but the dark side is pretty dark. Let’s start there so we can end on a happier note.

I happened to hear an interview with Steve Almond, about his book Against Football: One Fan’s Reluctant Manifesto. I learned from this review, which aired about the same time, that there’s some question about who the intended audience might be, and perhaps some other issues, but he does approach the subject thoughtfully.

Scandal and abuse at the college level is also well documented. Unsportsmanlike Conduct: College Football and the Politics of Rape, by Jessica Luther, will be coming out this fall.

Last summer, after dropping off my son at college, I organized my return trip around bookshop visits. When I stopped in Missoula, at least one small store there was donating a portion of the proceeds from the sales of Missoula: Rape and the Justice System in a College Town, by Jon Krakauer.

Again, college football is the topic of The System: The Glory and Scandal of Big-Time College Football, by Armen Keteyian. I don’t know about you, but when I see a description of a book written in ALL CAPS, ALL BOLD, I hear a booming sports announce voice in my head. Appropriate? I suppose so. 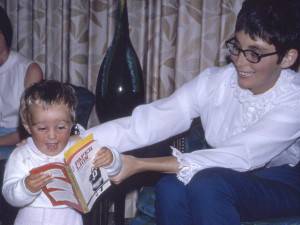 Fashions and home decor may have changed since the 60s, but a good book is timeless.

I will confess that the idea that football might be the topic of any book at all was utterly foreign to me. But then, recently, I embiggened an old family photo and found myself enthused with a copy of Paper Lion, by George Plimpton.

Turns out, that book was the first of what is now known as participatory sports journalism. The new edition celebrates fifty years since the publication of this classic.

A Few Seconds of Panic, by Stefan Fatsis, was recommended to me by a friend. Fatsis reports on his experiences with the Denver Broncos—this one is more recent, published in the oughts.

I heard Buzz Bissinger give a lecture in my concert hall a few years ago. At the time, I didn’t know anything about Friday Night Lights, book or TV show. Curiously, I remember two things about the talk, neither to do with the book—that he was one of our more affable speakers, and that he shared some alarming statistics concerning salary increases, in the last twenty-five years, for college professors, presidents, and football coaches—30%, 100%, and 500% respectively.

And then, of course, there’s The Blind Side, by Michael Lewis.

Growing up in the US, it would be impossible to entirely avoid football your whole life. In fact, my dad watched football on TV sometimes, but he couldn’t stand Howard Cosell’s voice, so he turned off the volume. For me, the game was my dad sitting in silence with his beer, occasionally yelling.

Later, in high school, I remember going to a game with my friend Christine, mainly because I had a crush on a player named Curtis. I was trying to understand. Really, I was.

“Why do they keep throwing those flags down? This is going to go on forever if they keep doing that.”

A grandmotherly-looking gal whirled around in the stands in front of us and said to Christine, “You have got to explain this to her. And start from the beginning.”

She did. Even though what was clearly important that night was the cute boy. I naturally forgot everything she said.

Well, until Greta and Benjamin schooled me. Those kids are big eight-year-olds, so they might not be so adorably patient with my slow learning curve anymore. But I sure wouldn’t mind watching another game with them. Yes, there is so much that is ugly about the business, and I have very mixed feelings, but the community—that part is good.

Editor’s Note: We’ve taken out the word “queer” from this article and apologize for its use.