Did you think that English literature began with Beowulf?

The book that is considered the beginning of English literature is a medieval manuscript known as the Exeter Book. The Exeter Book contains religious and secular poems, placed side by side with riddles written in double entendres that will make you blush.

Here are ten things you should know about the Exeter Book.

1) The Exeter Book is the largest still-existing collection of Old English poetry and riddles. The Exeter Book has been dated to c. 975, but several of the poems included in the book are much older. Some of them have been dated as far back as the 7th century.

2) The Exeter Book is believed to have originally consisted of 131 pages. The original first eight pages of the book have gone missing and were replaced by other pages at a later date.

3) Only four poetic manuscripts written in Old English exist today. Of these four, the Exeter Book is the oldest, the most varied, and the best preserved. 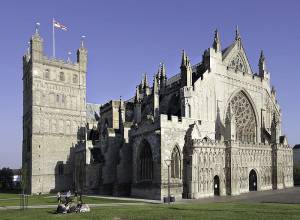 Exeter Cathedral. The current structure was completed c. 1400 and was partially destroyed during World War II.

4) The Exeter Book gets its name from the Exeter Cathedral. The book was donated to the cathedral’s library in 1072 by the first bishop of Exeter, Leofric. The Exeter Book has been in the possession of the cathedral ever since. It is not known how Leofric got his hands on the book.

5) The Exeter Book contains poems that deal with purely religious themes, as well as religious allegories and topics of everyday life in Anglo-Saxon England. The Exeter Book also contains ninety-five riddles. Several of these poems and riddles can only be found in the Exeter Book.

7) Ezra Pound’s poem “The Seafarer” is an interpretation of the first ninety-nine lines of the Exeter Book’s poem by the same name. The poem tells the story of an aging seafarer who looks back on his life as death draws near. 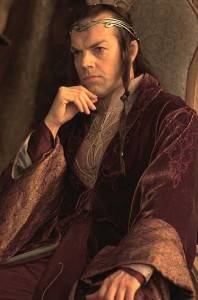 Elrond, son of Eärendil, played by Hugo Weaving in Peter Jackson’s movie adaptation of Tolkien’s Lord of the Rings.

8) Most famous of all is perhaps the inspiration that J.R.R. Tolkien drew from the Exeter Book’s poem “Christ I” where the following lines can be found: “Hail Earandel brightest of angels/ over Middle Earth sent to men.” These lines are considered to be the origins of Tolkien’s creation of Middle Earth and his character Eärendil, father of Elrond.

10) On June 21, 2016, UNESCO added the Exeter Book to its Memory of the World register. Other works included on this list are Anne Frank’s diary, the Book of Kells, and the Bayeux Tapestry.

Oh, about those double-entendre riddles. Here is one. The answer will be provided below.

A curiosity hangs by the thigh of a man, under its master’s cloak. It is pierced through in the front; it is stiff and hard and it has a good standing-place. When the man pulls up his own robe above his knee, he means to poke with the head of his hanging thing the familiar hole of matching length which he has often filled before. 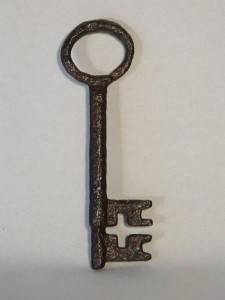 The Exeter Book is on public display at Exeter Cathedral.