A recent Book Riot post described a number of literary genres (Fiction 101: Literary Genres, Defined), with a summary of tropes you would typically expect in the genre, how the experts define it, and some examples of titles from those particular categories. It was a thoroughly enjoyable read, but as the author, S. Zainab Williams, pointed out, categorising books can be messy affair with potential to offend. I’m not offended by the list, but I would like to add a genre that is often neglected in literary discussions or conflated with romance: chick lit.

Following S. Zainab’s template, I offer a field guide for spotting chick lit: The protagonist is a woman, typically in her 20s or 30s. She has good friends, and family relationships can be fine and healthy or a bit strained, and the love interest and happily ever after is a key component of the story. She has a career, interests, and dreams of a future. The protagonist and her love interest are likely to have sex, but unlike in erotica or romance, the author does not take you into the bedroom. There are no throbbing members here, just a passionate kiss at the door. Usually. Oh, and the cover is probably pastel.

The Undomestic Goddess and Can You Keep a Secret? By Sophie Kinsella

The Time of Our Lives by Jane Costello

My purpose here is not just to define the genre, but to draw attention to its position as a legitimate genre and type of reading, despite how it tends to be ignored in academic and literary discussions. This neglect of chick lit is most visible in its shelving in public libraries.

Libraries are spaces that purport to encourage all forms of reading and judgements about taste are withheld, but even here, chick lit is often cast aside. In many public libraries, certain genres in adult fiction are separated: crime, mystery, science fiction, fantasy, romance. Depending on the demographics of the library users and the physical size of the library, westerns and urban fiction might also be pulled out.

In the eighty-plus libraries I’ve been to in the past four years, I’ve seen chick lit pulled out at two libraries. One was a branch library in LA, that had a small label stating ‘chick lit’ on some spinner shelves, and included titles that were arguably more romance than chick lit. The shelves were right at the end of the library, and not very close to the adult fiction section. 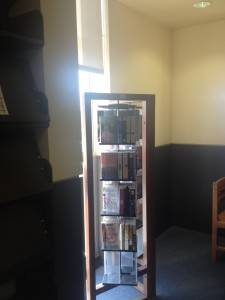 The chick lit section in an LA public library, tucked away in a corner.

The other library that I’ve seen separating out chick lit is Narellan Library, in NSW, Australia. They separate chick lit out with clear displays, near the entrance of the library and next to romance. The books are shelved amongst the main adult fiction section, clearly signposted and with a pink stiletto sticker. They are also noticeably distinct from the romance collection, which are marked with red heart stickers. 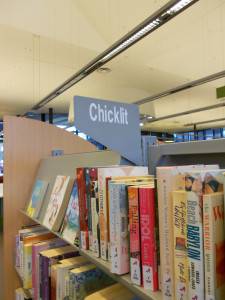 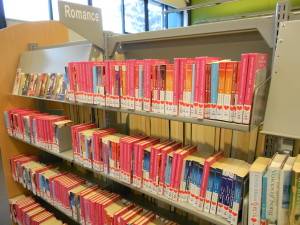 It is telling that there has only been one library out of over eighty that I’ve visited in recent years to shelve chick lit separately and distinctly. Despite the best-selling authors and numbers of sales and readers, it is still a genre not often considered ‘proper’ reading. Which is a shame, because there are some excellent books in that genre, with interesting stories, well-developed characters, and good writing. There is, of course, a range in quality within the genre, but there is some great stuff out there as well.