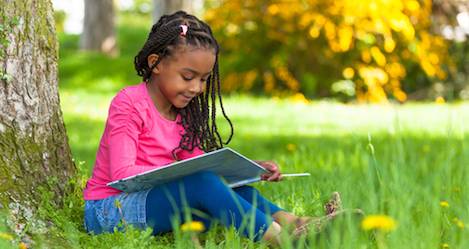 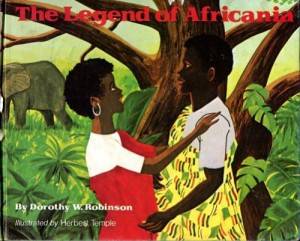 About twenty-nine years ago, on my eighth birthday, I received a picture book from my aunt which would affect how I viewed myself, my place in the world, and others for the rest of my life. The book was The Legend of Africania by Dorothy W. Robinson. The Legend of Africania is described as “An allegorical tale of Africa’s struggle against the ravishment of its people and country,” but I found it to be so much more.

The story: An evil spirit arrives in Africa and abducts Africania, the beautiful daughter of the Sun and the Earth. He forces her into slavery for hundreds of years, making her turn natural resources into gold for him. She is finally saved by Prince Uhuru and she and all the slaves, who were abducted from all parts of the world, are freed.

It was not the heroic prince or the freeing of the slaves which stuck with me for these past almost 30 years, it was this: The evil spirit was willing to let Africania roam about freely, but only if she looked and acted like him. He had stark white skin, limp straight hair, and was full of greed. So she made a paste that a covered her rich, brown skin and made it deathly white. She straightened her hair and left no trace of her natural curls. She learned the ways of the evil spirit, suppressing her gifts of song and laughter. She came to a point where she did not recognize herself any more. She found that all the other slaves had also done this to themselves, so that they may roam freely and without punishment.

That part always made me cry.

To me, one of the worst possible things was to not be able to be your true self. On top of that, I thought it was absolutely horrible for everyone to be the same. Being the child of a white & Filipino mother and an African-American father and living in the San Francisco Bay Area, I came into the world knowing nothing but diversity. I could not imagine life without it.

Each time I read The Legend of Africania, I vowed to never allow someone to force me to change myself to fit in, even through junior high where the verbal bullying aimed at me was centered around my hair. My wild, curly, natural hair. I was never judgmental of other people if they decided to straighten their hair, perm their hair, crimp their hair, or whatever. I fully support others in expressing themselves in whatever ways make them feel fulfilled and comfortable. But to this day I can count on two hands the number of times I’ve straightened my own hair, each time with The Legend of Africania lurking in the back of my mind.

The Legend of Africania instilled in me the idea that my skin color, my natural hair, and my happiness were powerful. That they are gifts and sources of pride and strength. This is a very radical thought for someone who looks like me, not only 30 years ago, but today: women of color loving themselves is a radical act.

My copy of The Legend of Africania sits on my shelf next to my copies of Jumanji, Go Dog. Go!, and The Giving Tree. It’s the only picture book I have from my childhood with characters who look like me. I don’t believe it was ever a very popular book and I don’t even think it’s in print any more, but it holds a special place in my life and I’m deeply grateful for its existence.