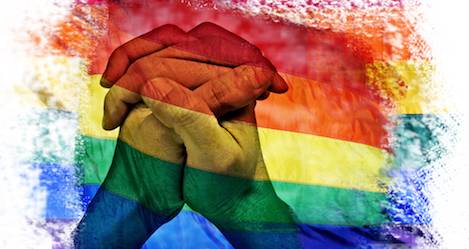 It’s been over a month since my city, formerly a synonym for family vacations, became a synonym for tragedy. Few people outside of our town realize that Orlando is also home to a thriving and growing literary community, one I’m so proud to be a part of every day both as an author and as an Event Planner for the Orange County Library System.

In times like this, we all turn to the things that give us comfort and hope for the future. For most of our readers here at Book Riot, these things include literature, libraries, poetry, and anything dealing with the written word. That’s why I wanted to share the Orlando book & literary community’s response to the shooting at Pulse nightclub.

My employer, the Orange County Library System, has made me so proud in their response to the events that broke our collective hearts. As early as June 12th, our librarians did what librarians do best: gather and share information. They started a Resource Guide that has evolved as events unfolded, including both internal and external resources.

Overdrive assisted our efforts by quietly donating a collection of ebooks chosen to help our community in the grieving and recovery process.

The library designed and made t-shirts available for staff to purchase at cost and many of us wore them to the ALA (American Library Association) Annual Conference. 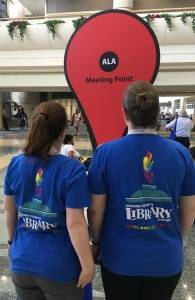 While LGBT displays were already up at many of our branches to celebrate LGBT Pride month, many of these displays were given and remain in prominent places. 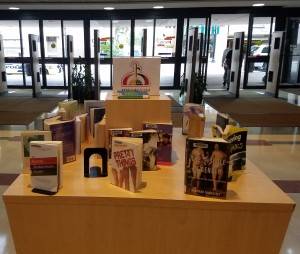 Display in the lobby of the Orlando Public Library 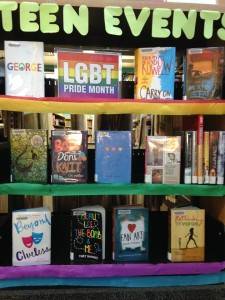 OCLS staff participated in the kickoff video for #KeepDancingOrlando, an effort to keep the spirits alive of the 49 souls we lost in the early hours of June 12th. They followed up by being one of the first organizations to film their own Keep Dancing Orlando video:

Teens who attended the New York Public Library’s Anti-Prom (let’s just pause for a second to appreciate how awesome the NYPL is for hosting this event) wrote “love letters” to the Orlando Public Library’s Teen Central. OCLS scanned these letters to share online and will display them for the public.

Orlando Memory is a community-based digital archive of the Orlando community developed by OCLS. They have created a special page to document the displays of love and support throughout the city. If you have pictures of vigils, memorials, etc, please consider contributing to this collection.

The thing that brought me to tears countless times in the past month was the constant visual show of support for our LGBT community. It’s worth noting here that our Orlando Public Library location in downtown Orlando is in a high-traffic area between Lake Eola and the Dr. Phillips Center for the Performing Arts, two locations that became the epicenter for memorials in Orlando. 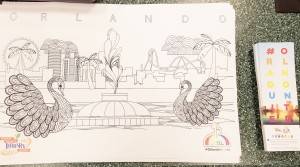 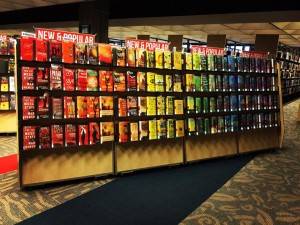 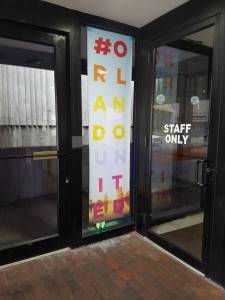 The Winter Park Library is in Orange County, but separate from the Orange County Library System. They hosted free grief counseling services and therapy dogs immediately following the tragedy. They also hosted a “Wall of Comfort,” inviting members of their community to write messages of comfort and caring.

“The ABA children’s institute quickly organized a book drive during their Orlando conference. Over 10 cases of books dealing with LGBT and grief /healing topics were donated to both Orlando Public Library System and Winter Park Public Library. Plus a case of primarily YA level books was donated to The Center on Mill’s library.” Kim Britt from Bookmark It, who helped deliver the donated books.

The ALA Annual Conference is in a different city every year, but 2016’s conference was held at the Orange County Convention Center. Before June 12th, the ALA Task Force on Equity, Diversity, and Inclusion was a driving force behind the events of the conference, but many of the planned events took on an added weight and still more events were added in response to the shooting. 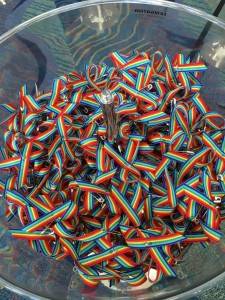 Rainbow ribbons were available for all ALA attendees at the registration desk. Photo courtesy of Melanie Higgins.

ALA President Sari Feldman issued a statement on June 13th, saying “Our nation’s libraries serve communities with equity, dignity and respect. ALA will carry this legacy to Orlando. In defiance of fear, ignorance and intolerance, the library community will continue its profound commitment to transforming communities by lending its support.”

ALA supported Orlando with a memorial event, a blood drive, and many other activities for the librarians visiting our city from all over the globe.

Several vendors also offered tributes and support at the conference. 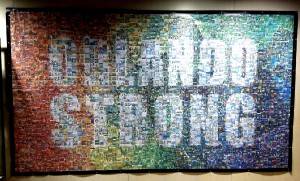 Gale (of Cengage Learning) collected over 3,000 images representing libraries, librarians, and their communities to create this mosaic, which they donated to the Orange County Library System 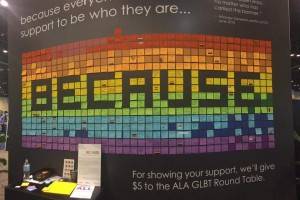 Bibliotheca/3M invited attendees to share thoughts on why diversity matters and donated $5 for each Post-it added to the GLBTRT. Photo courtesy of Christina Martins

In addition to the personal messages I received from author friends all over the world, authors in the Central Florida community came out in a big way to share their thoughts and their efforts in support of our city.

“We Love Orlando” was a benefit party featuring artists, authors, and musicians at The Geek Easy. One of the organizers, Whitney Hamrick, said, “I campaigned for the importance of having a consistent message of love and hope for the LGBTQ, Latino, and Orlando community. I felt that having a fundraiser for a community hurting and not giving them a chance to speak was half-hearted. Orlando needed a voice and 14 local writers volunteered their time and their words.” The event raised $5,000 for the Pulse Tragedy Community Fund.

Local author, editor, and University of Central Florida Professor Nathan Holic created a heartwrenching comic exploring his feelings following the shooting. He has also compiled a list of local writers’ responses to the tragedy:

All of this is on top of members of our community individually contributing to relief efforts in non-bookish ways. I saw book bloggers standing in line for 7 hours to donate blood, a library staff member volunteering to be an “angel” at victims’ funerals, and authors dropping by relief efforts to offer donations of time, money, food, and water.

I know I merely scratched the surface here, so please feel free to leave links in the comments. I chose to focus on the response from those inside the Orlando community, but responses from the global literature community are more than welcome below.