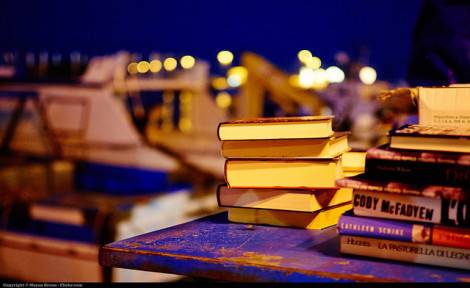 The Roman philosopher, politician, and lawyer Marcus Tullius Cicero is credited with the oft-repeated quote, “A room without books is like a body without a soul.” Despite the continuous advancements of technology and the easy-access of media provided by the internet, books and their loyal readers have refused to concede their literary consumption to flickering computer screens. When it comes to dating, reading can make someone appear more attractive. In a recent study conducted by the dating app My Bae and shared on GalleyCat, “Across the site 21 percent of matches made had reading tags in common versus 15 percent for music, films, or TV tags.” For the majority of dedicated readers, these results are not surprising. Despite the yearly pessimistic projections about the declining state of print publishing, books are sustaining their place in culture at large. Or, at the very least, they are nowhere near the point of irrevocable extinction.

I choose to believe that books will never die because the act of reading forms a sacred bond between audience and writer, reader and protagonist. The act of reading involves a different, much more urgent connection that cannot be found in the passivity of watching a TV show or film. In regards to fiction, the act of reading demands a commitment to self-analysis as much as it requires the deconstruction of the characters. For me, the matter of whether a character is “likable” is irrelevant. The books that stick with me, burrow deep into my consciousness, are the ones that not only reveal larger truths about the world, but challenge my perspective. The characters break free of the page and manifest into flesh and blood reflections of inner struggles, fears, worries, and/or joys. I’m more apt to find someone who reads much more attractive than someone who scorns literature, simply because it indicates that they are exercising their emotional and social intelligence.

In a study published in Science, David Comer Kidd and Emanuele Castano revealed the benefits of reading literary fiction. They found that reading literary fiction can help with deciphering emotions. “Understanding others’ mental states is a crucial skill that enables the complex social relationships that characterize human societies,” they said. As an introvert, I am much more comfortable around people who are able to utilize their emotional intelligence to aid our interactions and thus encourage my trust. Additionally, the benefits of reading extend beyond emotional intelligence. According to the National Reading Campaign, “readers have better physical health, empathy, and mental health.”

Don’t get me wrong: I’m not saying that I would never date or have a relationship with someone who doesn’t read or doesn’t like to read. Opposites do attract, to an extent, and one of my longest, committed relationships was with a man who didn’t particularly like to read. His bookshelves were sparse, filled with DIY manuals rather than novels. On the other hand, I find it difficult to have a romantic attraction to someone who can’t understand or dismisses such an essential piece of my being. For me, reading is like breathing.

Recently, I went on a first date with a guy who unabashedly admitted that he didn’t read much because fiction “bored” him. He said that he’d rather have someone explain the plot of a book to him, than actually sit down and read. I was dumbfounded. How could using your imagination be such a bore, such a chore? Why would anyone prefer to have someone explain an entire book to you? The experience wouldn’t fully be yours; the book would be filtered through the biases of the messenger. It was the difference between being in the stadium and witnessing a historic home-run versus having someone recount the play long after it happened.

There were a few reasons why I declined that second date, but I’d be lying if I said our reading habits didn’t present a clash in personalities. Although my date was savvy in subjects that required technical precision, he seemed disconnected from cultural discussions. I found that I had to police my vocabulary. He frequently didn’t follow what I was saying, mixing up the meaning of words or missing them altogether. Unable to get a read on my behavior, he misinterpreted my reactions as aloof or cold or disengaged. In reality, I was wondering how I was supposed to communicate with someone who apparently needed a dictionary any time I opened my mouth.

I’m sure some men find my love of books to be silly and a waste of time. But I’m not concerned with those men. As John Waters so bluntly said, “We need to make books cool again. If you go home with somebody and they don’t have books, don’t fuck them.”