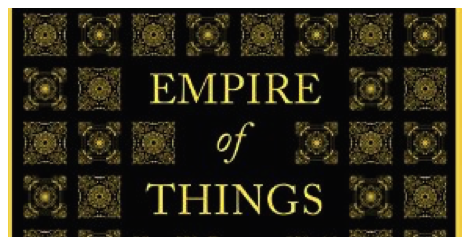 I’m confused about all my stuff, that is, not my emotional baggage, but my possessions. We all are. We’re having a zeitgeist moment about Things.

Marie Kondo’s quasi-religious Kondo Method in The Life Changing Art of Tidying Up was a runaway success. My friends and I gathered to whisper about our wayward shirt-folding styles. We resolved to do better, to go and sin no more, and bless our chests of drawers.

I’m reading Frank Trentmann’s incredible doorstopper Empire of Things: How We Became a World of Consumers, from the Fifteenth Century to the Twenty-First.  Turns out that this moment — where we’re all peering into our sock drawers — has been happening for a thousand years, and people and cultures across the globe like me, like us, have waffled between conspicuous consumption of goods, and a more reigned-in, sumptuary-law, austerity mode where you can’t wear ermine, honey, for instance.

Trentmann’s book “is the result of a lifelong study of man and his need to acquire.” Don’t be daunted by the “dense, detailed narrative.” It’s a terrific read. It is a jungle in the marketplace of our hearts because why we buy the things that we buy is complicated, emotional, and socially-conscious. We want to have that ephemeral thing called “taste” and we also want to keep up with our neighbors, whether they were 12th century Venetians or modern day ex-urbanites.

I see parallels between my desire to acquire wabi-sabi, locally-fired artisanal coffee mugs and the early modern European women who hosted tea parties and Kaffekranzchen, a social style which “marked out women as arch-consumers, simultaneously guardians of domestic sensibility and potential spendthrifts,” as Trentmann writes. I batted my eyelashes. Who? Me?

But these raku mugs represent who I am and that is, a person of discerning tastes, and they make a real impression on my guests: the impression that I am the shizzz.  Like it’s 1598 and I  have “tasteful objectivity” (as Trentmann calls it). It’s like I’m squee-ing over my first shipment of “shells and nutmeg” from the Dutch West Indies. “Goods and goodness advance hand in hand.”

I’m totally guilty. After I threw out loads, courtesy of the KonMarie  method — it was a virtual book burning, the blaze of my abandonment of the albatrosses of all my superfluous things —  I bought new things. Isn’t that totally normal? I think a lot of people did judging from the new streamlined bamboo serving-ware I noticed in my friends’ homes, and the rise in the class of people called organizing consultants.

Instead of European rococo, I went minimalist, Japanese aesthetic, tatami mats, and single bud vases in which to display single buds and the well displayed book of the poetry of Basho, and yes, new, weighty Korean-clay mugs for my morning joe. [Read more about Korean pottery, specifically celadon, in A Single Shard, the Newbury-award winning Y.A. book by Linda Sue Park.]

See how I care about my nest, and feather it with layers of minimalism shade-grown, humanely-raised, fair-traded luxe items that are decorative and softly show off my class, taste and educational background! And damn, if I’m not partying like it’s 1724. I’m behaving exactly like a Dutch woman from back then. It’s astonishing, actually, how similar we are.