Maria Dahvana Headley will be appearing at Book Riot Live 2016, November 12 and 13 in New York City.

Maria Dahvana Headley is best known for her NYT bestselling YA novel Magonia and her collaboration with Neil Gaiman on editing the short story collection Unnatural Creatures, but that’s just scratching the surface. Her style and subject matter range far and wide, and her imagination is frequently a matter of amazement to me. So where to start? I have thoughts! 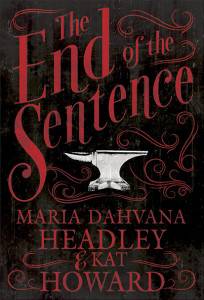 My own introduction to her work is where I recommend you start, since clearly it worked on me, and that’s her e-book novella The End of the Sentence, co-written with author (and former Book Riot contributor) Kat Howard. Malcolm Mays is trying to rebuild his life in an old house in rural Oregon when he starts receiving letters from someone named Dusha Chuchonnyhoof (craziest name ever or craziest name ever??), who claims to be more than 100 years old and the rightful owner of the house. Chuchonnyhoof says he is coming back to claim his property — and that’s just the tip of the iceberg of weirdness this story unleashes in its pages. This is a haunted house story, but not the kind of haunted house story you’re thinking of from all those movies with haunted houses. (For a start, the people involved have actual motivations for the bad choices they’re making.) It’s creepy, but the elements that make it creepy shift from one chapter to the next. At times it reminded me of The Shining; at other times, it reminded me of the weirdest Grimm’s fairytales; and at the end, it’s a creepy all of its own making. If you’re interested in being kept up late at night, on the edge of your seat, avoiding looking at mirrors for fear of what might be looking back, this is the book for you.

Then, there are two directions you can go. Want something with ships that float in the sky, bird people, and magic? Head straight for Magonia, which we’ll talk about in a minute. Want something that continues the horror of The End of the Sentence and adds a whole lot of gore, plus Shakespearean references? Proceed to Queen of Kings, more on which below! 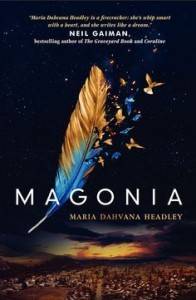 Magonia is Headley’s most recent book, and the first in a two-book series (the sequel Aerie comes out in October). It follows the adventures of Aza Ray, who has been chronically ill from birth and is struggling through her teenage years. She can hardly breathe, ever, she might be in love with her best friend, and now she’s starting to have hallucinations. Ships are flying through the sky, strange birds are appearing out of nowhere, and someone somewhere is calling her name. Then Aza finds herself above the clouds, in a new body, with an entirely new life if she wants it. But what does this new world want from her, and what is she willing to give? Headley’s fascination with folklore continues here, and the world she builds is convincing enough that you might find yourself watching the clouds a little more closely. And if you’ve ever wondered what a YA novel might look like that took literally Emily Dickinson’s ‘“Hope” is the thing with feathers’, here you go. 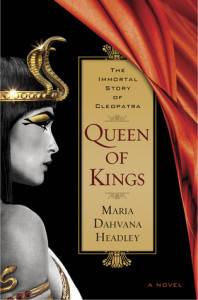 Ready to get real dark? Let’s talk about Queen of Kings, Headley’s retelling of Cleopatra’s last days, which is both gory as hell (literally, in this case) and a hugely fun read. As Octavian’s forces surround Alexandria and Mark Antony prepares to go into battle, Cleopatra is making her own plans to summon a goddess. She’s not ready to lose a war or the love of her life, and makes a terrible bargain with Sekhmet, goddess of death and destruction. Possessed of horrible new cravings and shifting new powers, Cleopatra travels from Egypt to Rome looking for vengeance. For an incredibly action-packed novel it gets off to a bit of a slow start, but the reader’s patience is rewarded and then some. The closer Cleopatra gets to Rome, the crazier things get, and the more hard turns the plot takes. Shakespeare, Virgil, and recorded history all contribute to the world of the novel, and Headley pulls monsters from many dark corners of mythology to populate it. 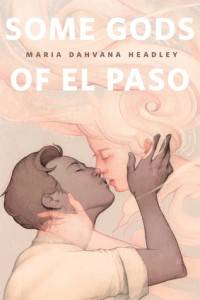 Whew! After all that, how about a gem of a short story to end on? “Some Gods of El Paso“, available in full on Tor.com, ponders what Prohibition might have been like if emotions truly were drugs. Our couple, Lorna Grant and Vix Beller, are on the run from the law Bonnie-and-Clyde style, but they haven’t killed anyone. In point of fact, they’ve been healing them — they’re sex-workers with a talent for taking on the burdens of those they sleep with. But they took a little too much, and from the wrong folks, and now half of Texas is after them. Here, Headley’s ability to tell a quiet, sly story that still packs a punch is on full display, and Ashley Mackenzie’s illustration beautifully sets the tone.