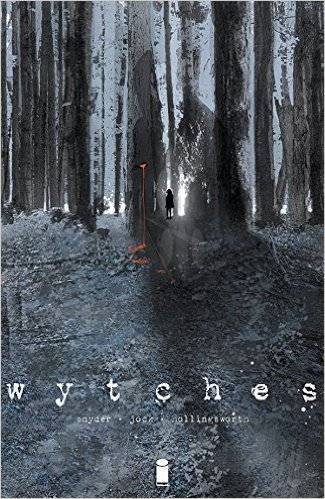 I recently read the deeply unnerving and awesome graphic novel Wytches by Scott Snyder. I can’t remember the last time a comic actually frightened me, probably when I was ten and my bedroom floor was littered with copies of Punisher War Journal.

It’s weird how fear can trigger memories that get tucked away in the folds of your brain. I remember when I first became a librarian in Canada, I was working in the public library and had visited a local school to speak to a grade eight class about responsible research and safe internet skills.

Yes, reading a terrifying comic book made me think of having to visit a school.

I was petrified, I hadn’t spoken in front of a group in a long time, let alone thirty 12-year-olds. I also had zero teaching experience.

I decided to start with a simple task and asked them to Google Charles Darwin. My goal was to show them the millions of hits that would be produced, many of which may contain faulty information.

As I was getting them to search for Mr. Darwin, I asked the class if anyone could tell me who Charles Darwin was. A boy put up his hand with more confidence than I’ve ever possessed in my entire life.

“He invented money,” the boy said, without missing a beat.

After he spoke he looked around the room proudly as if to say to his classmates, “How’s it feel to be slapped in the face by knowledge?”

I’m from a small, rural town. The people there are hardworking and generous and will do anything to help someone in need. However, my school was so tiny that they had to take pictures of inanimate objects in order to fill up the yearbook. The pictures would go: “student, student, student, pencil sharpener” and so on.

I still can’t believe I lost out to that mop for “Most Likely to Succeed.”

I remember once that we went on a class trip to Pizza Hut. It wasn’t a reward or somewhere we went after the trip was over. Pizza Hut was the trip. There just happened to be a new Pizza Hut that opened 15 miles down the road and that was where we went. I learned a lot that day, mainly about crusts and the various cheeses that they can be filled with.

I went to high school pre-internet and I sometimes feel we’d go on class trips to other towns just to make sure everyone was okay.

Needless to say my school experience was fun but not as heavy on the learning as some other schools in the heavier populated areas.

Why am I telling you this? As I mentioned, I love my hometown and I had a great childhood but when a 12-year-old tells me with that much confidence that Charles Darwin invented money, I won’t lie, my brain paused for a millisecond. Maybe Charles Darwin did have something to do with the creation of our current monetary system. I had no idea, when I was in school supposed to be learning that stuff I was investing every ounce of free time trying to figure out all of the fatal moves in Mortal Kombat.

Sweat began to form on the ridge of my brow and, like the poor woman trapped in the tree in the first pages of Wytches, I felt the sharp edge of desperation crawl up the ridges in my spine.

I decided to roll the dice and inform the student that Charles Darwin had not, in fact, invented money. I waited with my breath held to see if the teacher was going to correct me. Then I realised that the teacher was no longer in the room, she had seen a chance to escape for a few minutes and took it. I was suddenly in charge, it no longer mattered if I was wrong about Charles Darwin’s involvement in coin-making.

I breathed out. I was going to be okay.

If Wytches can stir up memories as disturbing as this, then it’s worth checking out.