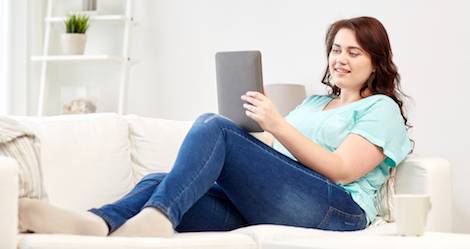 This is a guest post from Alison Doherty. Alison lives in Brooklyn and recently graduated from The New School with an MFA in writing for children. She blogs about young adult books atHardcovers and Heroines and is working on her first novel. Follow her on Twitter @alisoncdoherty.

I’ve equated being thin with being sexual for most of my life. In kindergarten, a baby sitter once called me fat (her exact words were “soccer ball stomach”). I remember thinking that it didn’t matter what my body looked like. I was six years old. I wasn’t trying to get a boyfriend. Later, in ballet class, I examined my leotard-clad body in the mirrored walls. I was taller, more broad shouldered, and, yes, thicker waisted than the other miniature ballerinas doing plies next to me at the barre. However, I didn’t feel upset or ashamed at the time. That would be something to worry about later.

I’ve always felt fine with my body as long as it remained my own. Seeking approval, attraction, and even romantic connection with others is where my self-esteem wavers.

These thoughts continued into high school and college. I’d go on extreme diets and turn into a girl who wore low cut tops and tossed my hair and giggled at boys’ jokes. Then I’d gain the weight back and retreat into a studious persona. Looking at pictures of me at both fifteen and five I can see now that I wasn’t really overweight, at least not in a medical sense. Not at my highest jean size. Not after a summer of eating little more than string cheese and Special K cereal. But my body was different from most of the girls in my class. It was a topic of concern and conversation at home and, at times, an object of scorn on the playground or at school dances. I couldn’t imagine anyone loving or being attracted to it, and by extension, me.

Reading essays by Gloria Steinem and Simone de Beauvoir did little to change this thought pattern. Instead, it was fat girls in romance novels that shifted my point of view. I’m not saying they entirely saved the day (or my sanity) all at once. But a few overweight romance heroines helped me move into a more body positive zone. They started to break down the link between body size and sexuality I’d held since before I even knew what the word sexuality meant.

It started with Good in Bed, by Jennifer Weiner, where the overweight heroine is, as the title suggests, good in bed. However it’s not her appearance that earns her this title. Instead, it’s because of her ability to give and receive pleasure. Honestly, at sixteen I’d never thought sexy meant anything other than looking sexy. This book began to change that, even though she does lose a lot of weight near the end of the book before finding true love (an unfortunate trope in an a complex and nuanced story).

Bet Me by Jennifer Crusie built on these lessons. The specifics of main character Min’s size are never fully revealed, but she’s described as “chubby,” “fat,” and “voluptuous” throughout the book. She’s also described as beautiful several times by Calvin Morrisey, the reputed ladies man who ends up falling for her. Again, she is sexy primarily not because of her appearance, but because of her experiences with Cal in the bedroom. She doesn’t just get to have her cake and eat it, too. She gets orgasms and Krispy Kremes to boot. As with Jennifer Weiner’s book, with Min I saw a romantic role model that looked more like me than anyone on television or in movies.

I found the real plus size heroine of my heart in Lady Calpurnia Hartwell, from Sarah MacLean’s Nine Rules to Break When Romancing a Rake. In this regency romance, Callie has spent her life wearing unfortunate dresses and sitting in spinster-seating at balls. But, of her own volition, she decides to change that with a list of adventures to undertake. The Marquess of Ralston begins accompanying her on these adventures and, not-so-surprising spoiler alert, falls in love with her. But it isn’t his love or attraction that makes Callie feel beautiful and sexy. Instead, it’s her journey of rediscovering her personality and learning to assert it. While her size is made clear, there are no mentions of food, dieting, or losing weight. This is what makes Callie’s story my favorite. Also its one of the hottest books I’ve ever read, which doesn’t hurt.

Romance novels are safe places for girls to try out and fantasize about romantic and sexual relationships before they’re ready to undertake them in real life. I think this is especially important for overweight or curvy or whatever-you-want-to-call-it girls, because too often the world asserts that they don’t deserve these experiences or that kind of attention.

I know this was true for me, and am beyond grateful to these three authors, and the others who write full, rich, sexy romantic lives for characters with bigger than average body types.

Now if only I could find a guy like Calvin Morrisey or Lord Ralston on Tinder I’d be all set.