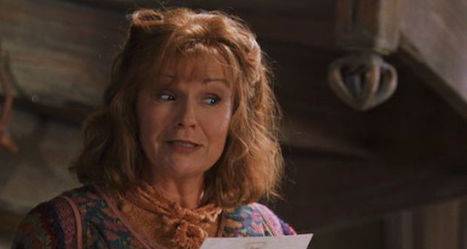 Here’s the singular image that that my brain conjures when I think about badass moms from literature:

We at the Riot decided to round up some more badass mothers:

Joe Hill has not one but two badass moms: Vic McQueen in NOS4A2 and Harper Grayson who is the pregnant heroine in The Fireman. At this point I’m certain I can count on Hill for strong, kick-ass (figuratively and literally), smart, courageous ladies.
— Jamie Canaves

Ginnie and Gran Hempstock from Neil Gaiman’s The Ocean at the End of the Lane: Gaiman’s novella has an excellent matriarchal, magical family with some excellently badass dialogue. I mean…


Category ID: 476
Category ID: 4284
Check Your Shelf Newsletter
Sign up to receive Check Your Shelf, the Librarian's One-Stop Shop For News, Book Lists, And More.
Thank you for signing up! Keep an eye on your inbox.
By signing up you agree to our terms of use
“You’re scavengers. Eaters of offal, of rubbish, of garbage. You’re cleaners. Do you think you can harm my family?” Gran Hempstock pretty much goes the Molly Weasley way here.

Mariam from A Flight of Pigeons: Ruskin Bond’s novella A Flight of Pigeons is set during India’s first revolution against the Britishers’ colonial rule. Mariam Labadoor, the mother of the narrator, flees along with her daughter when her husband is killed in an act of rebellion. The story follows the narrator, as her vehemently courageous mother convinces the local Pathan leader not to kill them, and later vehemently opposes his marriage to her daughter. Badass.

So many of George R. R. Martin’s mothers are badasses (let’s be honest, in his books, they kind of have to be), but let’s talk about Catelyn Stark and Cersei Lannister, two of the women who probably identify with motherhood most. This does not mean they are good moms, or even good people, but almost everything they do is done for their children. Catelyn rides out with her son’s army. Cersei does everything she can to protect her children — in fact, she often over-protects them, to their detriments. We can also look at Daenerys Targaryen, an example of a woman who is unable to have biological children, but who is fiercely maternal when it comes to those she’s adopted.

Essun from N.K. Jemisin’s The Fifth Season starts the book by suffering a crushing loss: she loses her young son, and the boy was most likely killed by his own father, her husband, during a natural disaster. Her husband has also kidnapped her daughter. Essun, a schoolteacher, leaves the relative safety of her community to walk across the country during what is essentially an apocalypse to find her daugher. There’s nothing more badass than that.
— A.J. O’Connell

Fran Goldsmith from The Stand by Stephen King: Frannie starts off as a college student from coastal Maine, unexpectedly pregnant, at odds with her parents and boyfriend, and generally trying to figure life out. Within a week, she has buried her father and 99% of the population has been wiped out by a superflu. Fran is sensible, down to earth, insightful, smart, and kind. She’s stoic, stubborn, and often an emotional barometer for the group. She’s also a dedicated chronicler, finding way to keep a journal throughout her ordeal to one day share with her child. Fran’s not kickass in the twenty-first century way. In fact, she’s an archetype of a certain kind of traditional caring, maternal femininity, but no less heroic for that.
— Jessica Tripler

Janice from The Awesome by Eva Darrows: The Awesome is ostensibly about a teenage hunter of the supernatural who needs to lose her virginity in order to get her vampire hunting license, but at it’s heart it’s a book about the relationship between Maggie and her mother, Janice. Theirs is an nontraditional life, but the issues that they work through during the course of the story are the same ones that mothers and daughters have navigated for all of history- just sandwiched between explosive fights with otherworldly creatures. The best is Darrows’ admiration for her own mother in the dedication and acknowledgements. Matriarchs forever.
— Ashlie Swicker

Do you have any recommendations about your favorite moms that kick ass in literature? Hit us with ’em!