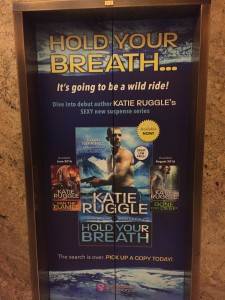 Advertising on the elevator doors at the Rio was a huge hit with RT attendees. And very confusing for hotel guests who were not with the convention.

What happens in Vegas was particularly romantic last week. April 12-17, Sin City played host to an estimated 3,100 people (including 900 authors) at the 2016 Romantic Times Booklovers Convention. This year’s RT was the biggest convention ever hosted by the romance review magazine/website, and based on the readers, writers, and librarians I talked with, that had a lot to do with the draw of the bright lights of the Las Vegas Strip.

But it wasn’t all slot machines, poolside beverage service, and deciding whether to go to the Chippendale’s show or Penn & Teller. A book convention is an opportunity for education, and I learned all kinds of things. I now know that Harlequin makes pretty decent wine, that you can spot a cover model at least 50 yards away, and that you should never bring a credit card to a casino floor.

But there were a few slightly more bookish takeaways as well:

Much like the romance genre, RT offers something for everyone. It’s hard to imagine another convention where you could go from a panel with writers of inspirational romance (books with Christian themes) talking about the opportunities of writing stories without alcohol, swearing, or sex to a panel where an acclaimed author explains why her orgy-throwing billionaire heroine is the one who most connects with her readers. Romance is an awfully big tent. There’s room for duchesses, scientists, Navy Seals and even vampire child care providers.

The issue of a lack of diversity in romance is ongoing. The call for broader support and wider exposure for romance writers of color has gotten louder and clearer in the last year, and RT featured a handful of panels focused on writing and supporting multicultural romance. Topics of inclusion came up in other panels as well, but it was hard not to notice that most of the panels focused on issues other than diversity were comprised of white women. If I could recommend one priority for RT in 2017, it would be to recruit more presenters – across the board – who are not white, heterosexual, cis, women. More perspectives make things more interesting. I’d also recommend more panels that cross genres (honestly, how fascinating would it be to have the erotica authors in discussion with the inspirational authors?), but I don’t want to be greedy.

Believe it or not, there is such a thing as too much sex. I heard a couple of discussions about how the (possibly 50 Shades of Grey-fueled) rise of erotica has led to an increase in sex in mainstream romance, and there’s a contingent of readers who may have hit a limit. Keep an eye out for a rise in the inspirational subgenre as well as more “sweet” and “clean” sex-free titles outside of it.

RT is chock full of aspiring authors. The sample of people willing to travel to an romance convention might have suggested this one, but I was still a little surprised by the number of people I talked with in sessions or at parties or while waiting in the very long line for the ladies room who had plans to write their own romance novels. From the “hopefully someday” writers to those ready with a manuscript, RT offered an opportunity not just to meet authors, but to learn the craft from those who’ve been there. I know I’m kind of a sucker for people following their dreams, but I think there’s something pretty cool about a place where a 70-something aspiring writer can spend a couple of days in a writer’s boot camp so that she can do justice to her characters. Or where a young, hopeful paranormal YA author can get coaching and tips to help her perfect her 30-second presentation for a potential editor at “Pitch-a-Palooza.”

A few other quick tips from those in the know:
•    As is true across the book world, audiobooks are big in romance and will probably get bigger.
•    According to insiders, the demise of both e-books and the paranormal subgenre have been greatly exaggerated.
•    As far as heroes go, Vikings are big business right now. Same with MMA fighters.
•    Facebook and Twitter are still solid ways for authors and fans to connect on social media.
•    That said, Pinterest, Tumbler, and Instagram have room for growth and could be the wave of the future, particularly if the genre is able to draw more millennial fans.

The next RT Booklover’s Convention will be in downtown Atlanta, May 2-7, 2017. Any predictions for how romance will change in the meantime? Or reasons romance fans should be excited to go hang in Atlanta?