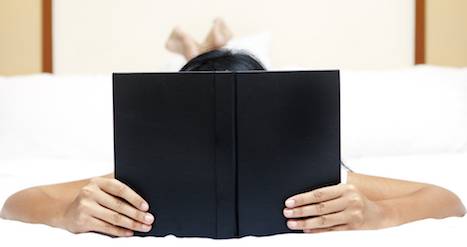 I’ve been involved on the GLBTQ book internet for many years now, and what I’ve enjoyed most about watching it mature over that time is seeing the growing presence of the latter letters of the acronym. I started The Lesbrary (and later Fuck Yeah Lesbian Literature on tumblr) because the “GLBT/LGBT” or “Gay and Lesbian” book blogs I found at the time were almost entirely M/M books, with the occasional F/F content, and no bi or trans stories to be found.

Luckily, this has begun to change, and one of the blogs that’s been leading the charge is Bisexual Books on tumblr. Before following Bisexual Books, I had included bi content on my blogs and read bi women books, but I hadn’t been very familiar with bisexual politics, or bisexual books as their own category. I was happy to absorb knowledge about bisexual lit and politics, as well to learn about stereotypes to avoid. One of the things that I became more aware of was the phenomenon of bisexual characters in media (books, TV, and movies) not being named as bisexual. Unlike gay or lesbian characters, they often talk about not wanting to label themselves, or they don’t discuss identity at all, or they spend the entire book agonizing over whether they are straight or gay as if these are the only options available.

As is often the case, once I learned about this, I began to see it more often. Bi characters did seem to not be named in the books I was reading. I could sympathize with how disappointing it would be to have even the stories that claim to represent you dare not speak your name.

Recently, though, this issue has become a lot more personal. When the label I had proudly donned for almost a decade began to look like a locked door, I felt lost like I haven’t been since I was a teenager. “Queer” was something I could take with me, but it didn’t offer the specificity I was used to, the legibility of saying “I am ___” and being seen and understood. As I was wandering in that unnamed space, the word “bisexual” looked like a beacon. Here was a label that I knew I could adopt without (internal) criticism. I knew the bisexual community wouldn’t ask me to prove my bisexuality, wouldn’t claim you could lose it by behaving incorrectly, wouldn’t gatekeep the term. It took me a little while to use it, but even before I did, just being able to see a door that was freely open to me was a relief I can’t describe.

Being named is important. Having a label means that you can find your people. You can find your stories. You can google it, search for it in the index, write it in chalk on the sidewalk, add it to your name tag, feel it organize and legitimate those tangled, raw feelings beating in your chest. “Bisexual” felt like open arms, like accessing support, like a family. It felt like being offered a spot at the table. It felt like being able to let out that choked-back breath.

But the only reason I could see that open door was through avenues like Bisexual Books. The only reason I knew that that word could apply to me was through the advocacy of bisexual activists who kept unrelentingly sending out the signal “you belong, you belong, you belong.” It wasn’t through the TV shows that flippantly remarked “Hello, gay now” without ever mentioning the big bad b word. It wasn’t through characters who claimed to be above labels, or that their love transcended labels. The way through that murky place was the solid weight of the word.

I could find the word “bisexual” because I was looking for it, and because I was already involved in the LGBTQ community, but not everyone in that lost, muddled place is so lucky. We need bisexual characters in books to name themselves. We need that outstretched hand for all people searching for that label, regardless of age–though especially in YA.