If you’ve been reading comics for a while, you may have seen people praising Uncle Scrooge or Donald Duck comics, or heard names like Carl Barks or Don Rosa tossed around. If you’re an American reader, you may be a little confused – where are all these duck comics coming from? Is Scrooge McDuck really that popular of a character? Are these stories even worth picking up?

The answers are: everywhere, yes, and holy haggis yes.

Disney’s been publishing comic books since the early 1940s, and Donald and his miserly, fantabulously wealthy uncle quickly became their biggest stars in that medium. Though their heydey of popularity in American comics was in the 50s, the Disney Ducks are global stars, and you’ll find them in newsstands all over the world, especially Italy, Brazil, and the Netherlands – sort of how we have Archie digests at supermarket checkout counters here.

This means that there are literally thousands upon thousands of duck comics out there, and between that and the fact that the American license tends to bounce around from publisher to publisher, it can be tricky to track down what to read and how to read it. It’s worth the effort, though, because there are gems for kids and grown-up kids alike out there! Here’s a few suggestions to get you started: 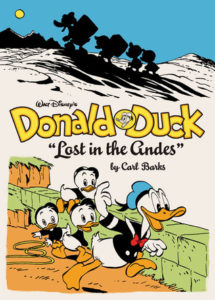 Known to fans for decades as “the good duck artist” back when Disney didn’t credit its creators, Carl Barks is the undisputed granddaddy of the Disney duckverse. Over the course of about 500 comics in his career, Barks developed Donald and his nephews Huey, Dewey, and Louie into more nuanced characters than they were on the screen at the time, and created a vast world for them to inhabit, as well as characters and concepts such as Duckburg, Gyro Gearloose, Gladstone Gander, Magica de Spell, Flintheart Glomgold, the Beagle Boys, the Junior Woodchucks, and, of course, Scrooge McDuck, who quickly outpaced his hot-tempered nephew in popularity. It was Barks who first sent Scrooge and company on high-flying adventures to the farthest reaches of the world in search of treasure. (Fun fact: the iconic rolling boulder in Raiders of the Lost Ark was lifted from a Barks comic.) If you loved DuckTales as a kid, thank Barks.

Barks’s stories have been reprinted rather unsystematically in the past, but for the past few years Fantagraphics has been publishing absolutely gorgeous collections of his work in a series of hardcover volumes called The Complete Carl Barks Disney Library. (Note: the volumes are numbered chronologically but published out of order to get the greatest hits out first, hence starting with Volume 6: Lost in the Andes.) These collections are beautifully restored with forewords and commentary by historians and comics scholars, and a delight to have on your shelf; sometimes I just look at my collection and coo. They’re admittedly a bit pricey if you’re looking to share with kids, but durable enough to stand up to repeated reading at bedtime, and each book is packed with a substantial amount of material.

Be warned, though: Barks’s work is funny and thrilling by turns – but it’s also a product of its time, and contains a fair amount of the sort of racism typical of pulp stories from the 30s-50s, mostly involving depictions of “exotic” or “savage” cultures. Brace yourself for dated stereotypes, and, if you’re reading with kids, some careful conversations. 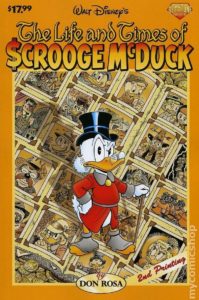 To many, Rosa is the successor to the Barks legacy. A devout Barks fan himself, Rosa has deliberately crafted all of his stories to fit within the continuity Barks laid out, and though he’s less skilled of a draftsman, he digs deeper into the characters’ psyches and relationships in an immensely satisfying way. Plus, he’s hilarious.

Start with his Eisner Award-winning masterpiece (and one of my personal all-time favorite comics), The Life and Times of Scrooge McDuck, which tells the tale of Scrooge’s rise from a poor shoeshine boy in Glasgow to the richest duck in the world. Then read it again. Then read the companion volume, fittingly named The Life and Times of Scrooge McDuck Companion. Once you’ve gotten your fill of those, it’s back to Fantagraphics for The Don Rosa Library, a series of chronological hardback reprints in the same beautiful style as the Barks ones. Then buy me all of them as presents. Thanks! 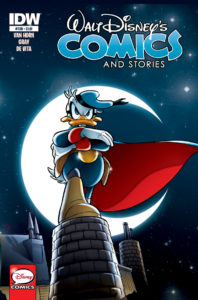 Maybe you’ve already read some Barks and The Life and Times, or maybe you just want to pick up some floppies with your own little ducklings on your next trip to the comics shop. IDW’s got you covered! They’re the current holder of the license for Disney’s classic characters titles: Donald Duck, Mickey Mouse, Uncle Scrooge, and Walt Disney’s Comics and Stories, the last of which holds the distinction of being the third-longest running American monthly after Action Comics and Detective Comics. These are translated reprints of stories originally published in other countries, usually Italy, so the jokes occasionally land a little oddly when something gets lost in translation, but they’re fun little stories that give American readers a chance to see the work of international superstar artists like Romano Scarpa or Daan Jippes, and characters and concepts that never gained much traction here, like Donald’s zany cousin Fethry Duck, or his superheroic alterego the Duck Avenger (best known in Italy as Paperinik). Plus each issue has a lengthy installment of a multi-chapter adventure, a short story, and a couple of gag pages, so you get a lot of bang for your buck. 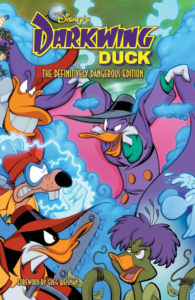 Modern Nostalgia (Is that a thing?)

Looking to mix some superheroes in with your ducks, or just nostalgic for the nineties? Then check out Darkwing Duck: The Definitively Dangerous Edition from Joe Books. This trade collects 16 of the 18-issue 2010 run from Boom! Comics, streamlined a tiny bit for republication. The best elements of the beloved Disney Afternoon cartoon are brought back to madcap life by writers Aaron Sparrow and Ian Brill and especially James Silvani’s elastic, appealing pencils, which fill every page with action and Easter eggs. It’s everything you miss from the show but in a format new readers can enjoy too – and best of all, Sparrow and Silvani are gearing up for a new ongoing, also from Joe Books and launching in April. Let’s get dangerous!