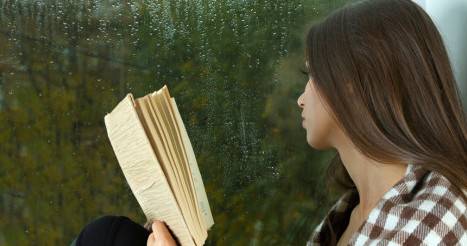 That feeling that sweeps or creeps over you as you read the last line in a long series of books is a bittersweet one. There’s a sense of accomplishment, for both the characters and yourself, at having made it to the end; a soothing understanding that it’s not truly the end for any of you—after all, the best books build a world that continues spinning whether it’s being written or read. And then there’s the loss, the realization that you’ll never read new adventures, that these characters—though still reachable—will not being moving forwards in any tangible way.

This mess of emotions recently struck me hard. Cat Valente’s five book Fairyland series (which, if you’ve read other articles of mine, you know I’m obsessed with) has come to an end. As I neared the last page of the fifth book, my heart rate accelerated and tears (yup, not even joking) welled in my eyes.

After all, this series was my first love when I became a bookseller. As a recent college-graduate, faced with the “real world,” September taught me to be composed, confident, and strong in the face of that oh-so-terrifying monster, Change. And even when one book was finished, another was always on the horizon.

But I turned to the last page, read that last sentence, shut the book, and poured myself a nice glass of red wine. On my favorite reading chair, I cuddled my book and sipped my wine and savored the series I’d spent my past two and half years in. I tried to ignore the Fairyland-less abyss that lay in my near future. But I couldn’t stop myself from wondering… now what? What’s a reader to do when the next book is never coming?

First, I say savor these warring feelings—the delight, the weepiness. It’s not every book that gives you all the feels, much less a series of books.

Ok, but life needs to move forward, right? The future may seem bleak, but there will be other books, series even, that make you feel this good.

If you’re not quite ready to move on, start the series over! After I finished that glass of wine and poured myself a second, I immediately picked up book one and re-read that first chapter. And I plan to re-read all the books very, very soon. A great series will always reveal something missed or forgotten in those earlier readings.

As fellow Rioter Susie Rodarme suggests to readers waiting for the next book in a series (lucky jerks), you can also write fan fiction. Just because the series’ author is ready to move on, doesn’t mean you need to be. You could also read fan fiction; if you love these books, I guarantee there’s someone writing fan fic on the internet who feels the same. You could form a support group!

Are there any books written by the series’ author you haven’t read yet? Lucky for me, Valente is prolific and I haven’t nearly covered her entire oeuvre. If you’ve already ripped through their collected works, there may still be unread interviews, articles, or short fiction/essays on the internet—Google that shit.

Ok, so you’ve read everything that this author has written, spoken, collaborated on. But have you read the books they love and have been inspired by? I often find the writers I love recommend the best books. They might have mentioned a title/author in one of those interviews, maybe they have a Goodreads account you can (not creepily) stalk, or maybe they’re on Twitter and wouldn’t mind recommending you something.

Failing that, I guarantee there is a friend/librarian/bookseller/Twitter acquaintance who has read that series and can recommend something similar, but not so similar that you wish it were the same. (To Fairyland fans looking for a similarly strong female protagonist or other-worldly adventures, I recommend S.E. Grove’s The Glass Sentence. For the older set, you may enjoy the language and magic of Uprooted by Naomi Novik.)

Finally, if you’re certain that nothing can assuage the hole in your heart that the end of this series has created, I recommend reading something completely different. Perhaps right now no other book will measure up, and that’s ok. You need time, not replacements. And maybe a hug.

So what have you read recently that left you desperate for more, and how did you cope? … Any Fairyland fans out there looking to join my support group? We’ll get through this, together.