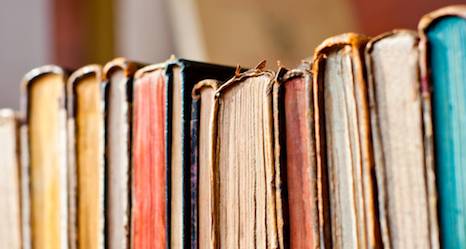 This is a guest post from Ashley Holstrom. Ashley is a newspaper lady, book fiend, nap queen, and cat lady. She lives near Chicago with her cat named after Hemingway and her bookshelves organized by color. She sometimes writes at her blog, Crooked Prose, and always tweets at @alholstrom.

The best kind of surprise in a used book is when a secret message is hidden inside, right?

I’d never realized it was a thing people did until I saw Definitely, Maybe. The heroine has a special shrine of copies of Jane Eyre with inscriptions, forever looking for the one her father wrote to her when she was small, right before he died. Talk about a swoon-inducing plot point.

Now it’s one of my favorite parts of used bookstores.

My copy of Lynne Truss’s Eats, Shoots & Leaves has a mildly indecipherable note on the inside cover from a fellow stickler named Vince. All I know for sure is this line of gold: “Remember: A good proofreader takes nothing for granite!” Aces grammar joke, Vince.

The copy of William Styron’s Darkness Visible I found on the $1 rack has a note to Marilyn, who “will enjoy this wise man.” He claims Styron and his wife are indirectly responsible for his survival and release from… Prison? Who knows! What we do know is “We are forever linked by this bond of brother-sisterhood.” Except that Marilyn got rid of the book. Later, sibling bond.

I’ve gotten rid of a few books with inscriptions dedicated to me, so I can’t be too upset with the notion of getting rid of something so precious. Merely seeing the book on my shelves and remembering the loving message inside, which was no longer loving, made my shelves gloomy. It poisoned the nearby books. It simply had to go.

What about you? Do you hunt down books with inscriptions?