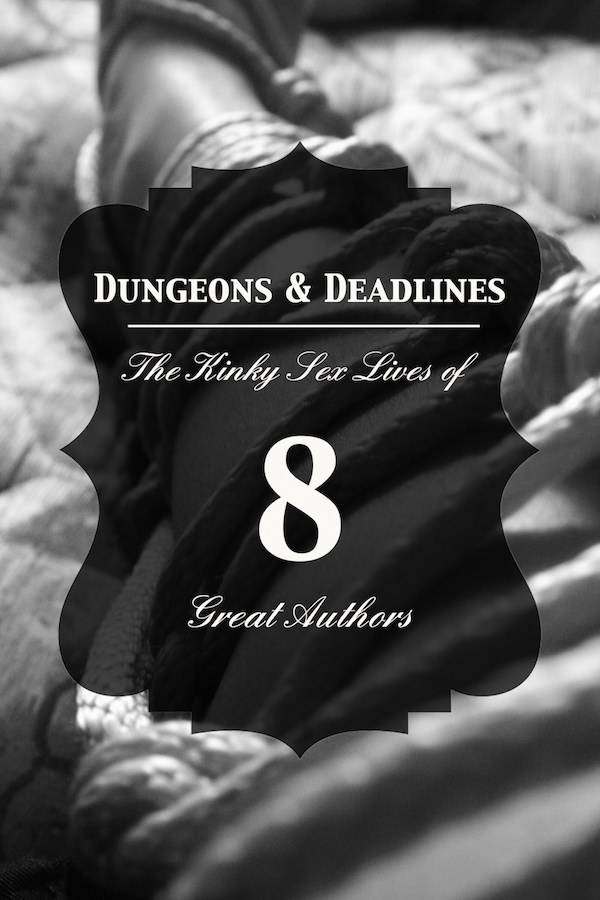 Studies have shown that creative people have more sex partners,1 and it’s no surprise that many of the world’s gifted writers, artists, and musicians have used that creative spark to light a fire in the bedroom. Here are some of the kinks, fetishes, and sexual predilections of eight great authors, illustrated with giphys.

Long before C.S. Lewis became one of the most popular Christian apologists of the twentieth century, he was into S&M. During his late teens Lewis became fascinated with sadomasochism and explored this interest by reading the Marquis de Sade. In a letter to his close friend Arthur Greeves dated January 1917 (when he was nineteen years old) Lewis writes,

“Across my knee” of course makes one think of positions for Whipping: or rather not for whipping (you couldn’t get any swing) but for that torture with brushes. This position, with its childish, nursery associations wd. Have something beautifully intimate and also very humiliating for the victim.2

Lewis signed three letters to Greeves around this time as “Philomastix,” which translates from Greek as “lover of the whip.”

Pushkin was a bona fide foot fetishist. In fact, he even wrote five stanzas of iambic tetrameter celebrating the beauty of the female foot in Eugene Onegin.

Alas, on every stray amusement


I’ve wasted far too many hours,
Yet were they wholly innocent
I’d still wander those bright bowers.
I love youth’s frantic energy,
The crush, the lights, the gaiety,
The girls in fashionable dress,
I love their little feet, confess
That, search all Russia though,
You’ll not find three lovely pair.
Ah, they made me long despair
Two slender feet…Now sad and cold
I still remember, and it seems
They yet can thrill me in my dreams.3

There are a number of other classic authors who allegedly had foot fetishes, among them, Victor Hugo4 and Johann Wolfgang von Goethe5. Contrary to Internet lore, it is highly unlikely that F. Scott Fitzgerald had a foot fetish.6

Venturing into squick territory, James Joyce had a love of flatulence. In 1909 he wrote a rather graphic love letter to his wife, Nora Barnacle, detailing all the ways he wanted to enjoy the…er…fragrant breeze of her derrière.

I think I would know Nora’s fart anywhere. I think I could pick hers out in a roomful of farting women…I hope Nora will let off no end of her farts in my face so that I may know their smell also.7

I guess it’s nice that farting was the opposite of an issue in their relationship?

Jean-Jacques Rousseau’s reputation as a masochist is well known. In his book, Confessions, he wrote about the sexual awakening he had at the age of eleven when he was beaten by an attractive nanny.

Who would believe this childish discipline, received at eight years old, from the hands of a woman of thirty, should influence my propensities, my desires, my passions, for the rest of my life, and that in quite a contrary sense from what might naturally have been expected? The very incident inflamed my senses…8

Some scholars believe his masochistic tendencies heavily influenced his philosophy and aesthetic sense.9

As a youth, Descartes held a special fondness for cross-eyed women. He wrote of how this passion developed and eventually deserted him.

As a child I was in love with a girl of my own age, who was slightly cross-eyed. The imprint made on my brain by the wayward eyes became so mingled with whatever else had aroused in me the feeling of love that for years afterwards, when I saw a cross-eyed woman, I was more prone to love her than any other, simply for that flaw–all the while not knowing this was the reason. But then I reflected and realized it was a flaw: I am smitten no longer.10

Much could be said about Byron’s love life, not least of which is the fact that he was probably a sex addict.11 What most people don’t know is that one of his many mistresses, Lady Caroline Lamb, sent him a gift of bloody pubic hair with a letter saying, “I cut the hair too close & bled much more than you need,” asking for a reciprocal gift of hair.12 Byron placed the bloody clump in a rose-gold locket and kept it for the rest of his life. Another of his lovers, a Mrs. Wherry, kept a ringlet of Byron’s pubic hair as a memento from their one-night stand.13 Ah, the days before waxing.

Good ol’ Benny had a thing for mature ladies. He even penned a treatise on why he believed older women made better lovers. “In all your Amours you should prefer old Women to young ones.” Some of the reasons he gave are that “when Women cease to be handsome, they study to be good,” “Because there is no hazard of Children,” and because “they are more prudent and discreet in conducting an Intrigue to prevent Suspicion.” 14 All this to put in rational terms the fact that older women got him hot.

I do not want to be the leader. I refuse to be the leader. I want to live darkly and richly in my femaleness. I want a man lying over me, always over me. His will, his pleasure, his desire, his life, his work, his sexuality the touchstone, the command, my pivot. I don’t mind working, holding my ground intellectually, artistically; but as a woman, oh, God as a woman I want to be dominated.

Lest anyone mistakenly confuse D/s with antifeminism, she also said, “I hate men who are afraid of women’s strength.”15