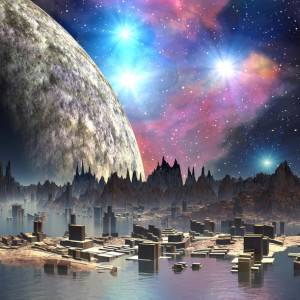 So, the other day while reading at lunch I had the Conversation with a coworker. Folks who read genre fiction know the Conversation: the one where someone asks you what you’re reading and in the middle of describing it for them they wrinkle up their nose and state “Oh, no. I only read realistic fiction.”

First of all, the phrase realistic fiction is ridiculous. What folks really want to say is they only read contemporary fiction, but that doesn’t have quite the same dismissive tone as realistic fiction. Even so, contemporary fiction is still fiction, just like science fiction, yet a thriller in which a middle-aged housewife fakes her own death in a super elaborate plot to get back at her cheating husband and hijinks ensue is somehow considered more real than a near future in which there is no clean drinking water. And yet, a quick glance at the news coming out of Flint, Michigan would indicate otherwise.

The bigger issue here is the way in which readers limit their thinking when they refuse to engage with certain texts by dismissing them out of hand for reasons of taste. I’m a firm believer that readers should not be forced to read portrayals or subject matter that is emotionally upsetting or psychologically damaging, but there is a difference between texts that cause pain and texts that make us a little uncomfortable. In this case, dismissing science fiction as not being realistic fiction is often just a way of avoiding thinking about difficult topics.

At its heart, science fiction is an exploration of possible futures. Whether the story is exploring a world in which dinosaurs have been cloned to populate an amusement park or the space travels of a group of marines, science fiction is a window into what the world could be based on how the world is now. Ignoring the realism in science fiction means that, as a reader, you are ignoring the reality of the world around you. By not engaging with the ideas presented in books like 1984, The Hunger Games, or Ancillary Justice what you are really doing is refusing to engage with larger ideas around imperialism, personal privacy, and the impact of the media on daily life.

There’s also a saying that’s made its way through the bookish internet “dystopian fiction is just a story about the stuff that happens to black people happening to white people.” And to a certain degree, this is true. When Hunger Games was first released much of the negative criticism surrounded the likelihood of people watching children die for entertainment. And yet, the video of 12 year old Tamir Rice’s last moments has circled through the internet with little consideration for propriety and zero outcry from the mainstream media.

Many of the storylines within present day science fiction are exploring problems within society, but especially within marginalized communities. By refusing to absorb those ideas, by considering them unrealistic, readers are refusing to even contemplate the reality of others. Instead, they are focusing on a reality that is comfortable to them, one in which it is easier to analyze the motivations of familiar characters than to consider the broader truths of the world. And while that is an okay way to live it isn’t really anything anyone should be proud of.

So next time someone decides to have the Conversation with you, the next time someone loudly proclaims that sci-fi isn’t realistic, give them a small smile and tell them “maybe you just aren’t paying attention.”