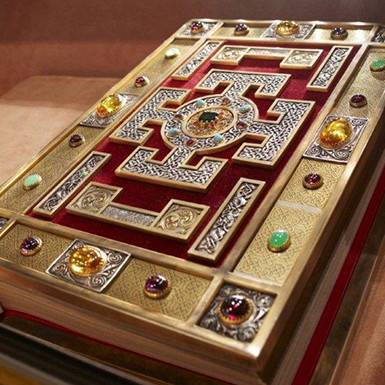 The time period between the years 500 and 900 is sometimes referred to as the Dark Ages. The idea behind this name is that after the collapse of the Roman Empire in Europe, people were left to fend for themselves in an unsophisticated and savage society.

This view is, however, inaccurate. Rather, the period referred to as the Dark Ages was a period of cross-cultural encounters which gave rise to incredible works of art, the finest of which were created in monasteries at remote locations in the British Isles.

Here are ten things you should know about the Lindisfarne Gospels.

1) The Lindisfarne Gospels is an illuminated manuscript consisting of 258 leaves of calfskin vellum, created in the late seventh to the early eighth century. Apart from its original binding which is believed to have been lost in a Viking raid, the Lindisfarne Gospels has survived intact throughout the centuries. 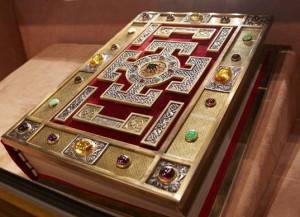 2) The current binding of the Lindisfarne Gospels is from 1852 and was paid for by Edward Maltby, Bishop of Durham.

3) The Lindisfarne Gospels consists of the four gospels–Matthew, Luke, Mark, and John. The text is copied from St. Jerome’s Latin translation of the Christian Bible, also known as the Vulgate. 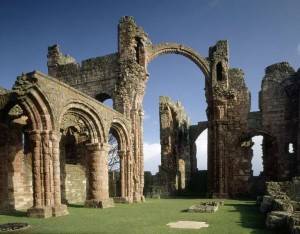 The ruins of Lindisfarne Priory are from the reestablishment period in the 12th century.

6) The Lindisfarne Priory was founded by Irish monks from the monastery of Iona, Scotland, in 635. The priory was built on an island known as the Holy Island of Lindisfarne, which is a tidal island off the coast of Northumbria in northeast England. The priory was abandoned in 875 following several Viking raids and was not reestablished until three hundred years later. The priory was finally dissolved in 1537 when Henry VIII ordered all monasteries closed as part of the English Reformation.

7) The Viking raid on Lindisfarne in 793 is the earliest known written account of a Viking raid. In traditional history writing this event marks the beginning of the Viking Age in the British Isles.

8) The artwork of the Lindisfarne Gospels is of the so-called Insular or Hiberno-Saxon style. This style contains influences from the Anglo-Saxons, the Celts, the Romans, the Byzantines, and the Copts, demonstrating the multicultural society that was Britain in the seventh century. 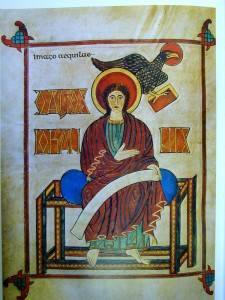 Portrait of John the Evangelist showing the Byzantine influence on the Lindisfarne Gospels.

9) Each of the four gospels included in the manuscript begins with a so-called carpet page, displaying an intricate and colorful pattern, followed by a so-called incipit page where the first letters of the gospel are beautifully drawn. 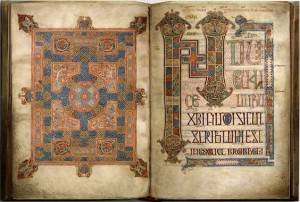 Carpet and incipit pages of the Gospel of Matthew.