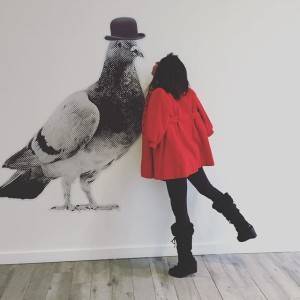 A round-up of recaps and articles on Book Riot Live 2015. Thanks so much to everyone who came out for our first year!

Jemisin likes the freedom that world building allows, letting her set up unique un-Earthly axioms, as in her latest book The Fifth Season. On the other hand, Atwood was quick to add that she doesn’t make anything up, per se.

The Guardian wrote up our Writing What You Don’t Know panel with N.K. Jemisin and Margaret Atwood!

“If there is one way to describe the Peanuts movie, it’s fucking dope”–@runwithskizzers at the live recording of Oh, Comics!

A sweet moment from this weekend’s Book Riot Live: Guest speaker Margaret Atwood got to see The Handmaid’s Tale tattoo chain, a collaboration among Book Riot, Litographs, and Random House.

Tor.com got a great shot of Atwood checking out the tattoo chain photos.

But in the end, the best part of my weekend at Book Riot Live… Getting to be with my people.

Bear Allen on finding her people.

At the conference, Anderson referred to herself and a handful of other writers like David Levithan and John Green, as resilience writers. Their books often cover heavy hitting topics like date rape, eating disorders, homosexuality, romantic relationships, and more. Rather than shielding our kids from the scary parts of life, it’s important to let them know they’re not alone.

There were two Happy Hours at the famous Strand Book Store and there was also a book crawl that was put together by some of the attendants. Let’s just say I spent too much money on that book crawl.

Kenya wrote up her whole trip, plus pictures. (She’s not the only one who spent too much at the Strand.)

That was what made the panel so amazing. It was so practical. If we want people reading more diverse books, we have to share what’s out there. Put diverse books in libraries, recommend them to friends and share your own copies. It’s such a simple concept, but I found it so empowering.

Dani learned a few things, found a new life goal, and got a picture with Reginald.

Reginald the pigeon (yes, we named him) was the most popular fellow at Book Riot Live.

Our own Rebecca made a Storify of everyone’s Reginald selfies!

Pegasus was lucky enough to have an exhibition table at the inaugural Book Riot Live convention this past weekend, and I spent the better parts of both Saturday and Sunday either manning the table (a.k.a. chatting with cool people and coloring) or attending just a few of the amazing panels they had on the docket.

“I had a dark phase when I was into painting and things like that. I started writing again at sixteen.”