When it comes to contemplating what constitutes romantic love, I turned to books instead of the fractured family dynamics silently festering in the houses of some of my friends, and even between my own parents, who had begun to drift apart before either was ready to acknowledge it, until the tension and teeth-grinding resentment blew apart that marriage with fiery inevitability like that scene in Coppola’s Apocalypse Now where the troops are gleefully dropping bombs in a swarm of helicopters, Wagner’s “Ride of the Valkyries” acting as the rallying cry for men flirting with madness and the grandiosity of ego-stroking patriotism.

When I think about the progression of my stance regarding romantic love and romantic relationships, certain books function as cohesive and colorful renditions of emotionally-compromised logic. Snapshots collected over the years by my mother cannot ever fully tell the entire truth about those ages frozen in my mother’s camera eye, not in the same manner as select books. 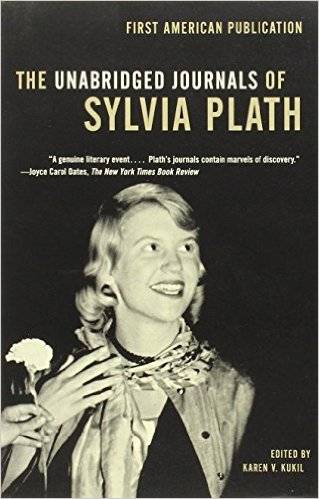 When I think of The Unabridged Journals of Sylvia Plath, I think of fall and my undergraduate years in Boston. I’d decided to pursue Writing, Literature & Publishing as my major and I had not yet hardened optimism and naivety into a death mask glowing like a full moon. I still believed that now that I’d finally escaped the unbearable sameness of white suburbia, I would morph into the Ultimate College Cool Girl, a sparkling conversationalist, chugging coffee and slithering cigarette smoke through pursed lips like a heroine in a Truffaut film. I wanted rough love, something that would easily bruise me, something a little dangerous where I could interpret martyrdom as love. Real love was for chumps. Doomed love was worth the agony because you knew it was real because it never came easy.

Plath’s journals, which include passages that Ted Hughes originally excluded, are not merely diaries, but artistic manifestos on family, gender roles, motherhood, and love as lush and corrupt as a Brontë novel. I was fascinated with the entries that detail Plath’s time studying abroad at Cambridge, because that’s where she met her eventual husband, poet Ted Hughes.

Their first meeting is the glitter of legends, Heathcliff and Cathy laying claim to one another’s souls without actually realizing the weight of such declarations of conquest. When Plath first met Hughes, she literally drew blood. In an entry from February in 1956, Plath describes their drunken introduction: “He kissed me bang smash on the mouth and ripped my hairband off…and my favorite silver earrings: hah, I shall keep, he barked. And when he kissed my neck I bit him long and hard on the cheek, and when we came out of the room, blood was running down his face.” I thought it was tragically romantic, the kind of random act of lightning reserved for two intellectuals of similar temperaments, people whose emotions ran like the water in aqueducts, connecting them to larger cultural forces.

That kind of meeting would be a better alternative to being ignored. When I graduated high school, I saw it as the chance to leave behind a small, forgettable town where white people automatically blended in and black people were outsiders or stereotypes. I romanticized Hughes and Plath’s relationship, thinking that it was the natural result of two passionate poets building a life together. I never had my bang smash on the mouth moment. My depression told me that I wasn’t worthy of even a quick kiss stolen after class.

I’ve reread Plath’s Unabridged Journals a few times over and have moved beyond the belief that romantic love must be violent to the soul. It’s like teenagers who are forced to read Romeo and Juliet for high school and think it’s a story about true love. It was never about love, but the recklessness of youth.

Editor’s note: Ted Hughes was incorrectly described as Welsh. That has been removed.